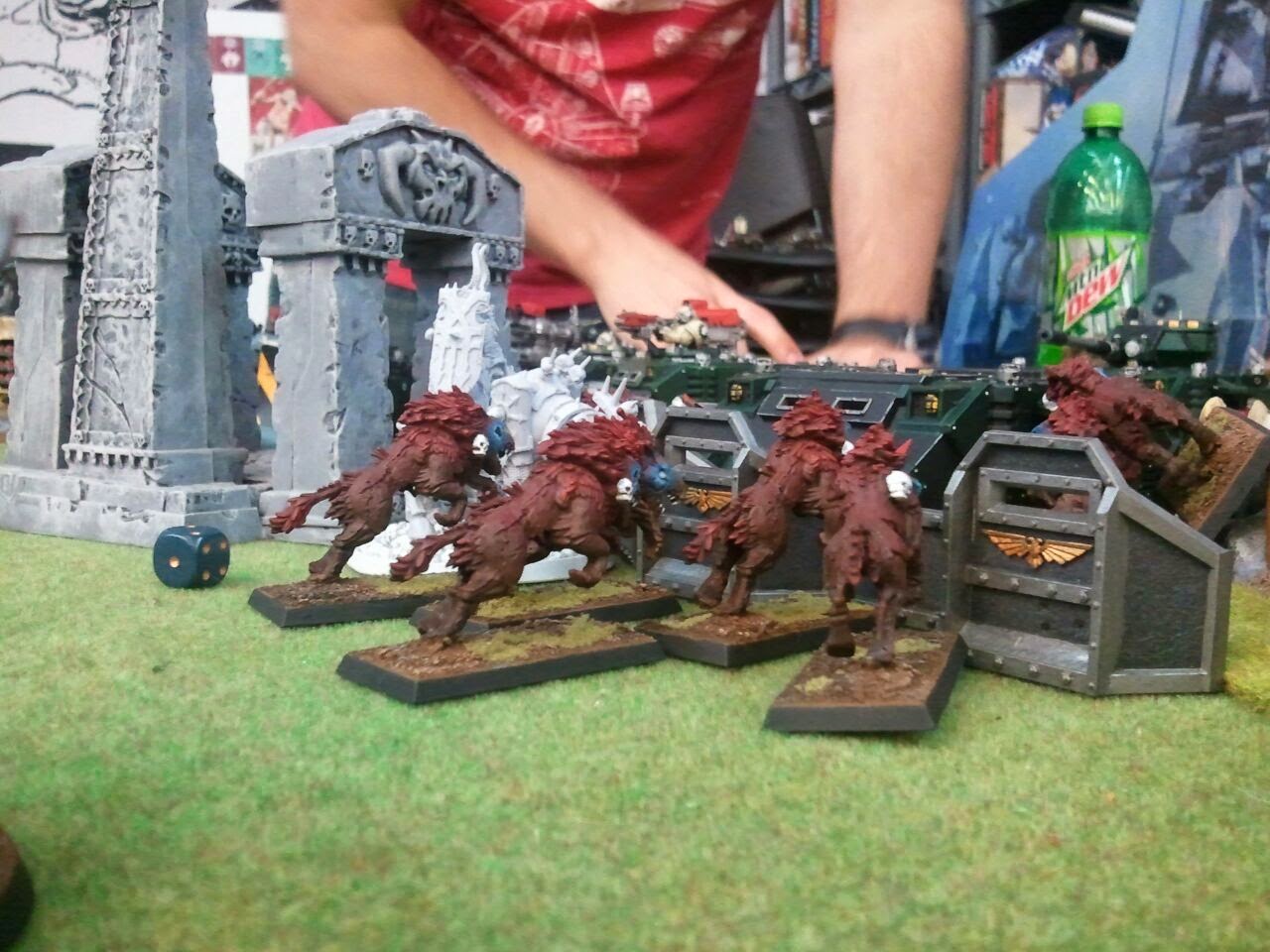 7th edition bitches! Makers and I tackled our first game together. After hearing about some of the crazy new shenanigans happening in the psychic phase with Daemons and summoning we decided to limit our fast game to a single level 3 psyker each. Being competitive players, we also decided to pass on doing the new tactical mission cards, as we can't imagine they will every be used in tournaments due to their unbalanced nature.

Points: 1750
Deployment: Hammer and Anvil
Mission: Crusade with 4 objectives in the center of each table quarter. 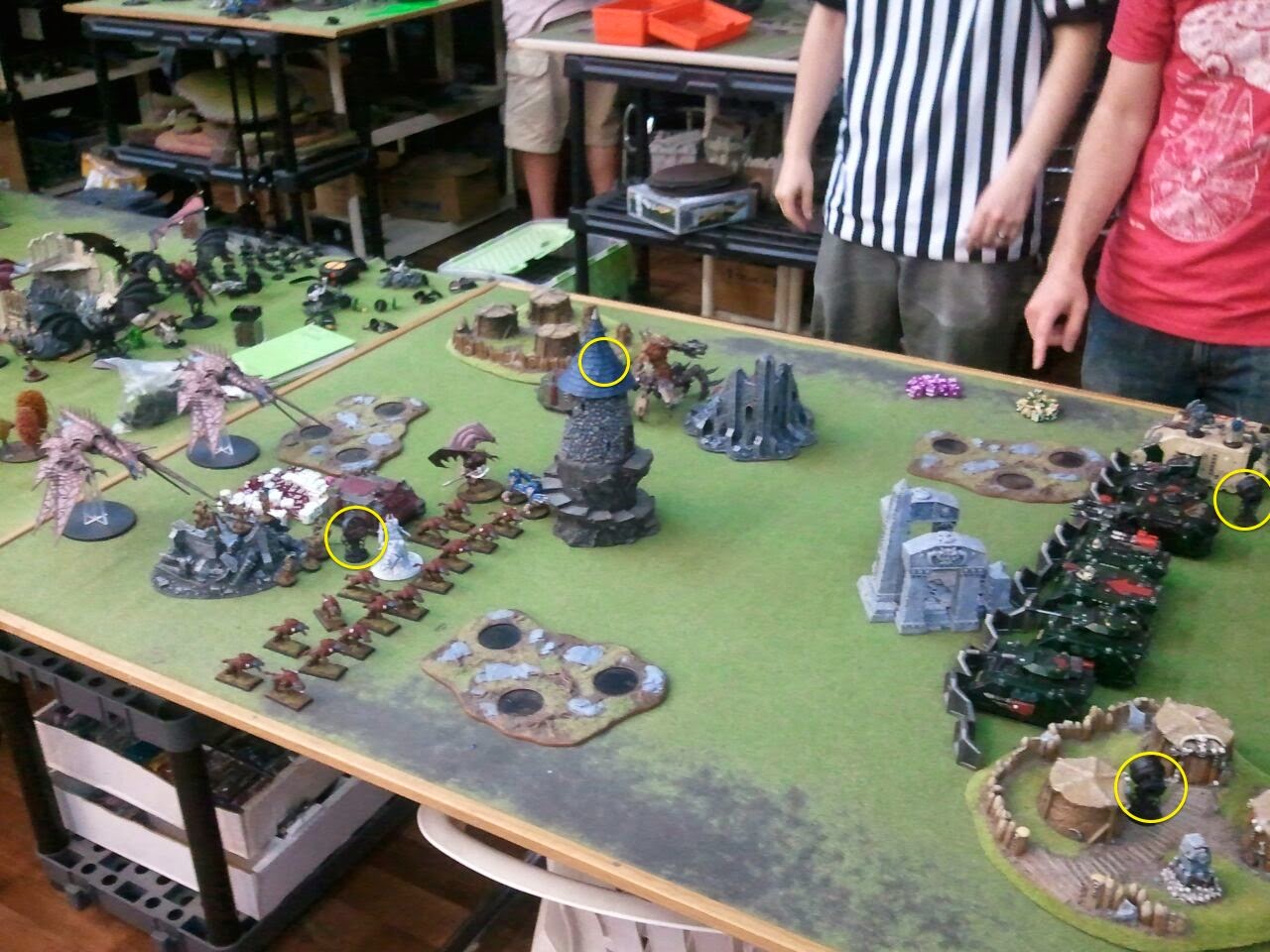 Makers won the roll to choose sides and chose to deploy first. He didn't want night fight but I did so we rolled and it was in fact night fight. Our deployments as well as objectives can be seen above. I rolled to seize and failed. I scouted my Flesh Hounds and Herald forward and the game began. 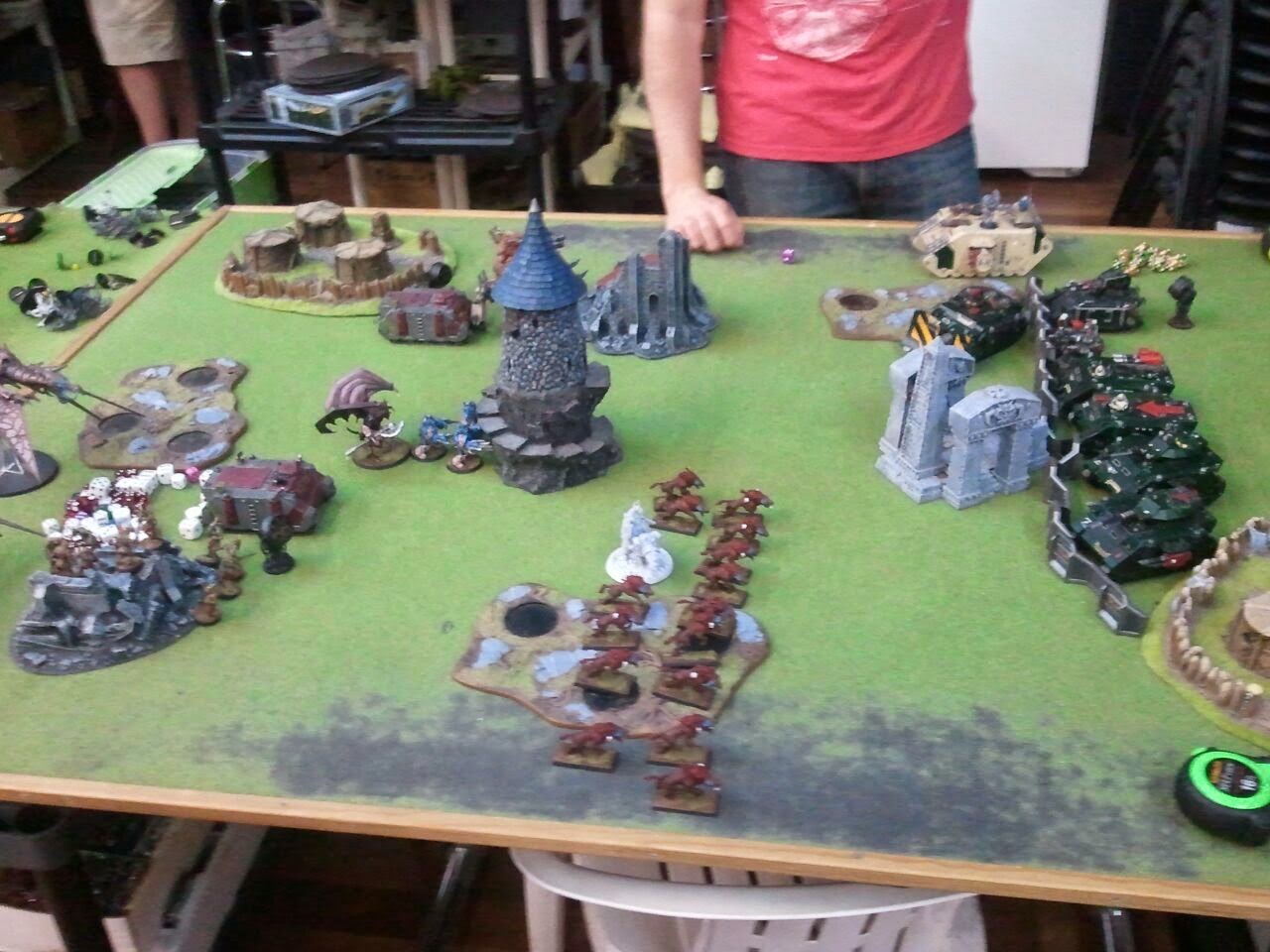 Turn 1: Makers moved his Vinidcator and Land Raider Crusader forward 6". In his psychic phase he attempted to cast Invisibility on his Land Raider but failed. At the time we didn't realize that you can't cast anything but witch fire spells while embarked on a transport. Nearly every shot he took was at my Flesh Hounds. He managed to kill 7 of them and put a wound on the Herald. He took a couple of shots at the Soul Grinder but gave up after he realized I had a 3+ save from the ruins and night fight.

My Plague Bearers stayed camped on the objective near the ruins. The 2 Rhinos moved forward  while staying in cover. The Soul Grinder moved up into the ruin. The Obliterators moved out from behind the castle to get line of sight for shooting. The Flesh Hounds and Herald moved up to his gun line. The Daemon Prince swooped up to support the Flesh Hounds and Herald. I attempted to use the Grimoire on the Flesh Hounds and failed giving them a 6+ invulnerable this turn. In my psychic phase I had 6 dice total. I threw 3 dice to cast Cursed Earth and bring the Flesh Hounds back up to a 5+ invulnerable. Sadly I also Perils'd. I lost a wound and we both lost 2 dice from our pools. I used my last dice to cast boon of Mutation on the Daemon Prince. I failed, but thanks to my Spell Familiar, I got to reroll the check and passed. I gained Feel No Pain. A Rhino shot at the Vindicator so that it was illuminated by its spot light. The Obliterators fired at the Vindicator immobilizing it. The Soul Grinder also immobilized it which stripped its last 2 hull points giving me first blood. The Flesh Hounds and Herald charged a Predator and wrecked it. 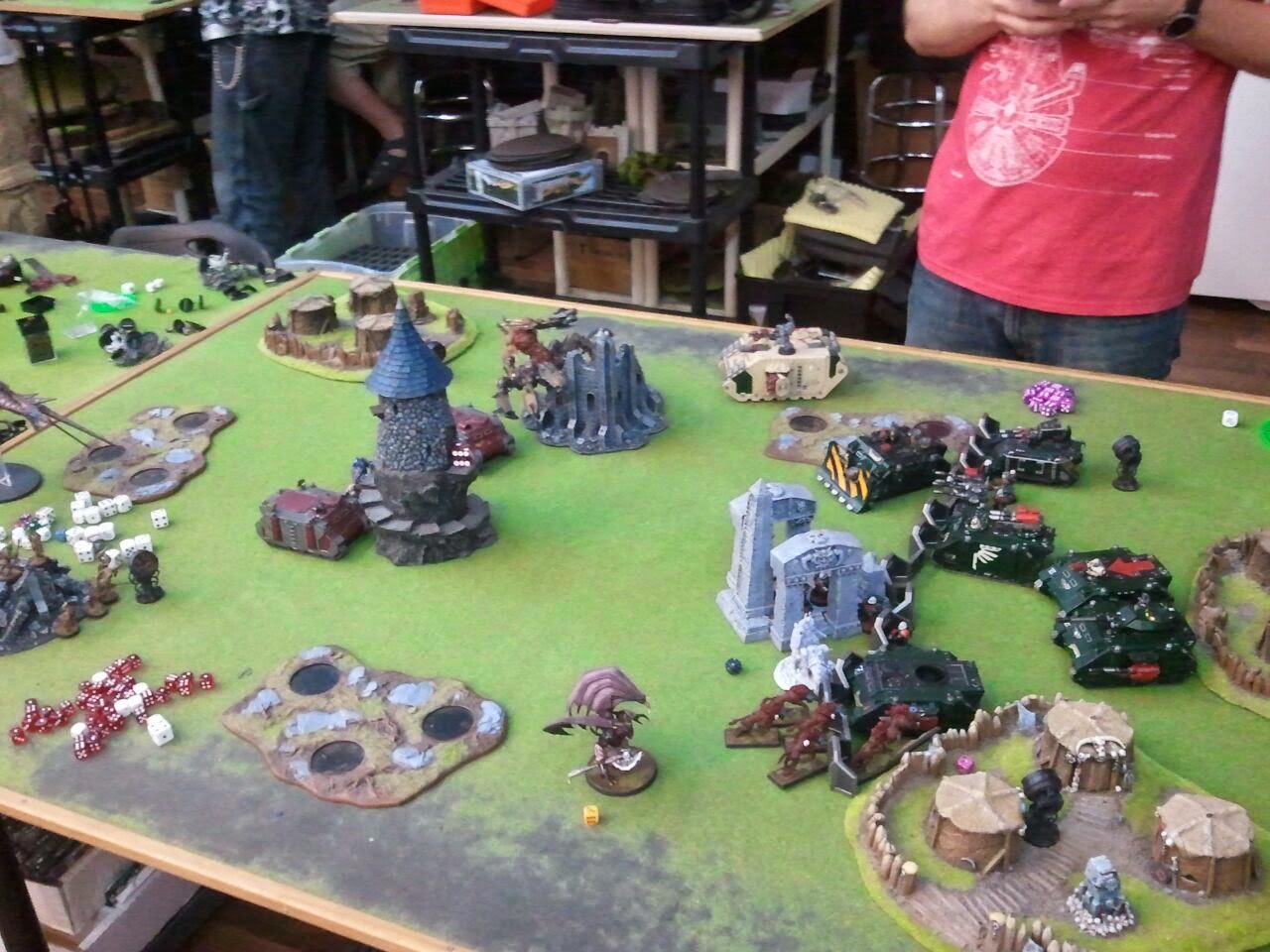 Turn 2: His one Rhino and Tac squad came in from reserves on the back of his board. A five man Tac squad disembarked from his Rhino on the line and moved into the ruin. They would shoot and kill one Flesh Hound. His Predator and Rhino both moved away from, and shot at, the Flesh Hounds, but failed to kill any. His Landraider moved forward towards the Soul Grinder and the Termies/Tigurius got out while his Master of the Forge stayed in. He cast Invisibility on his Termies and I failed to deny it. They would assault and immobilize the Soul Grinder but also loose a man. His Razorbacks and Quad gun immobilized one of my Rhinos.

Both of my Heldrakes came in from reserve. One killed the unit in the ruins and the other killed the unit on the Quad gun. The Obliterators shot multi-meltas at the Landraider and did nothing. Sadly the Soul Grinder fell to the Termies. The Flesh Hounds and Herald moved forward. The Prince swooped forward and Vector Struck the Predator. The new Vector Strike rules suck, so he managed to do absolutely nothing. In the psychic phase he cast Cursed Earth and thanks to the reroll from his Spell Familiar managed to summon a unit of 10 Plague Bearers. In my excitement I totally forgot to assault with the Flesh Hounds. 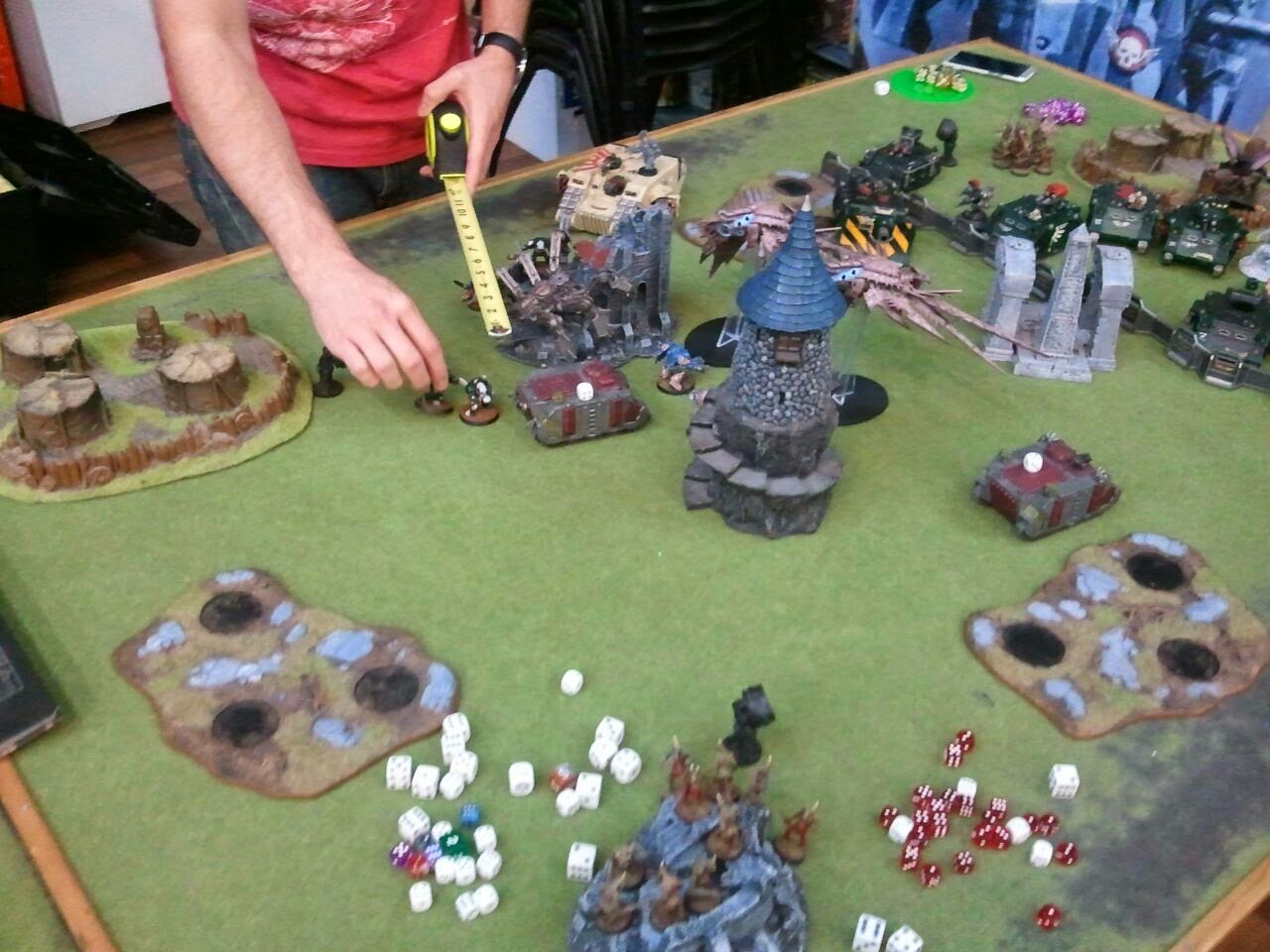 Turn 3: Terminators moved towards the disabled Rhino which they would assault and wreck. His Invisibility also failed this round. But he managed to cast Dominate on my Obliterators. A 5 man Tac squad disembarked from on of his Razorbacks to shoot his quad gun which took a hull point from a Heldrake. He fired his Razorbacks at the Heldrakes as well but failed to do anything. Combined shooting from the Predator, 2 Rhinos, and one of his Tac squads killed 3 Flesh Hounds. His Landraider killed a handful of Plague Bearers that I had just summoned. 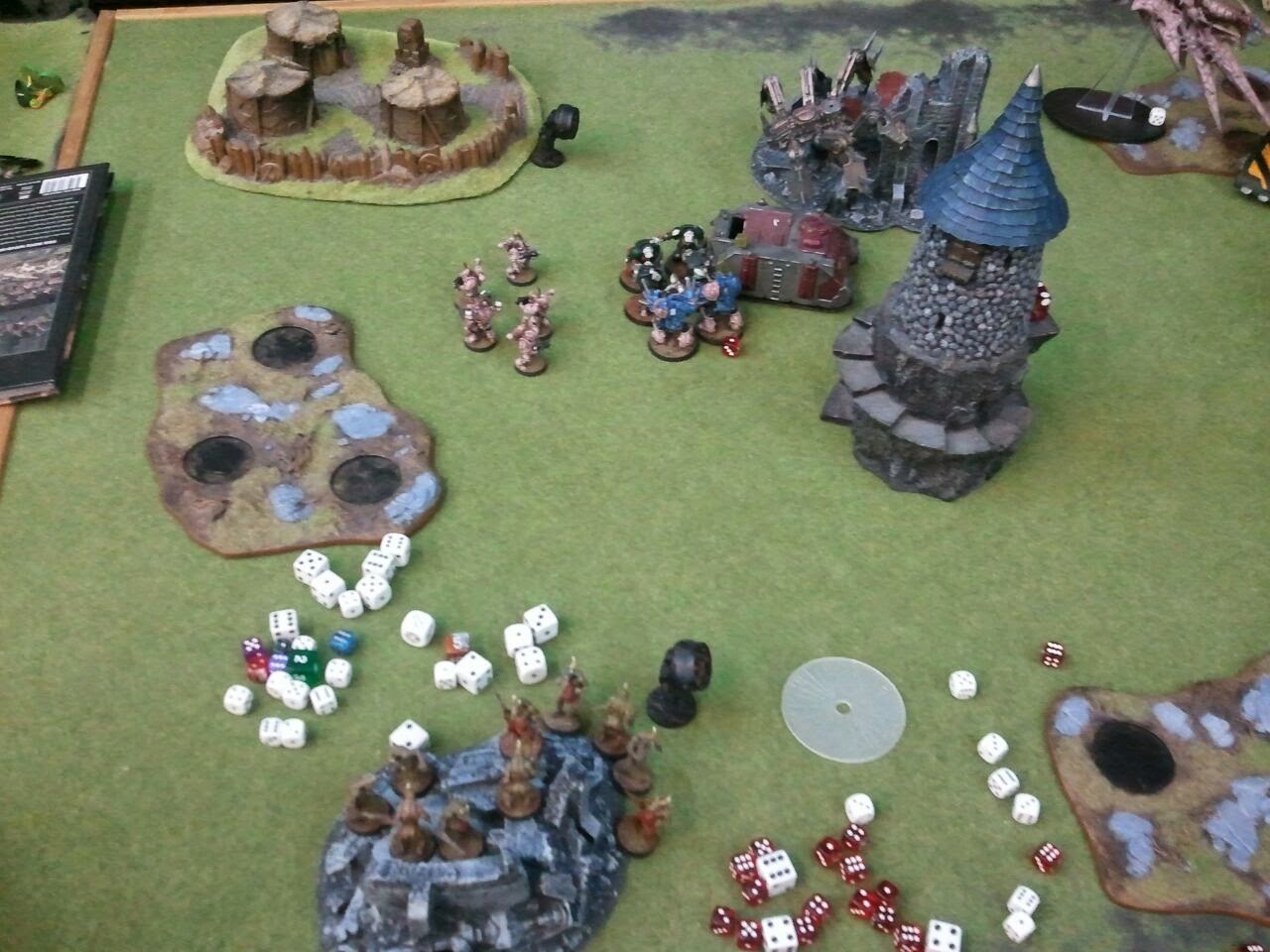 One Heldrake moved up while the other when into hover mode. One wiped out the Tac squad on the Quad Gun while the other tried to kill the Tac near the Flesh Hounds. Sadly I rolled poorly and only killed 2. The Prince Vector Struck a Razorback and again did nothing. He cast Cursed Earth and Boon of Mutation on him self gaining Eternal Warrior. Plague Bearers assaulted a Razorback and took a hull point from it. The Flesh Hounds assaulted the remaining Predator and wrecked it. 5 Chaos Space Marines shoot into his Termies but failed to do anything. The Obliterators failed to shoot because of Dominate. They would assault the unit, and due to a failed Look Out Sir roll, kill Tigurius. 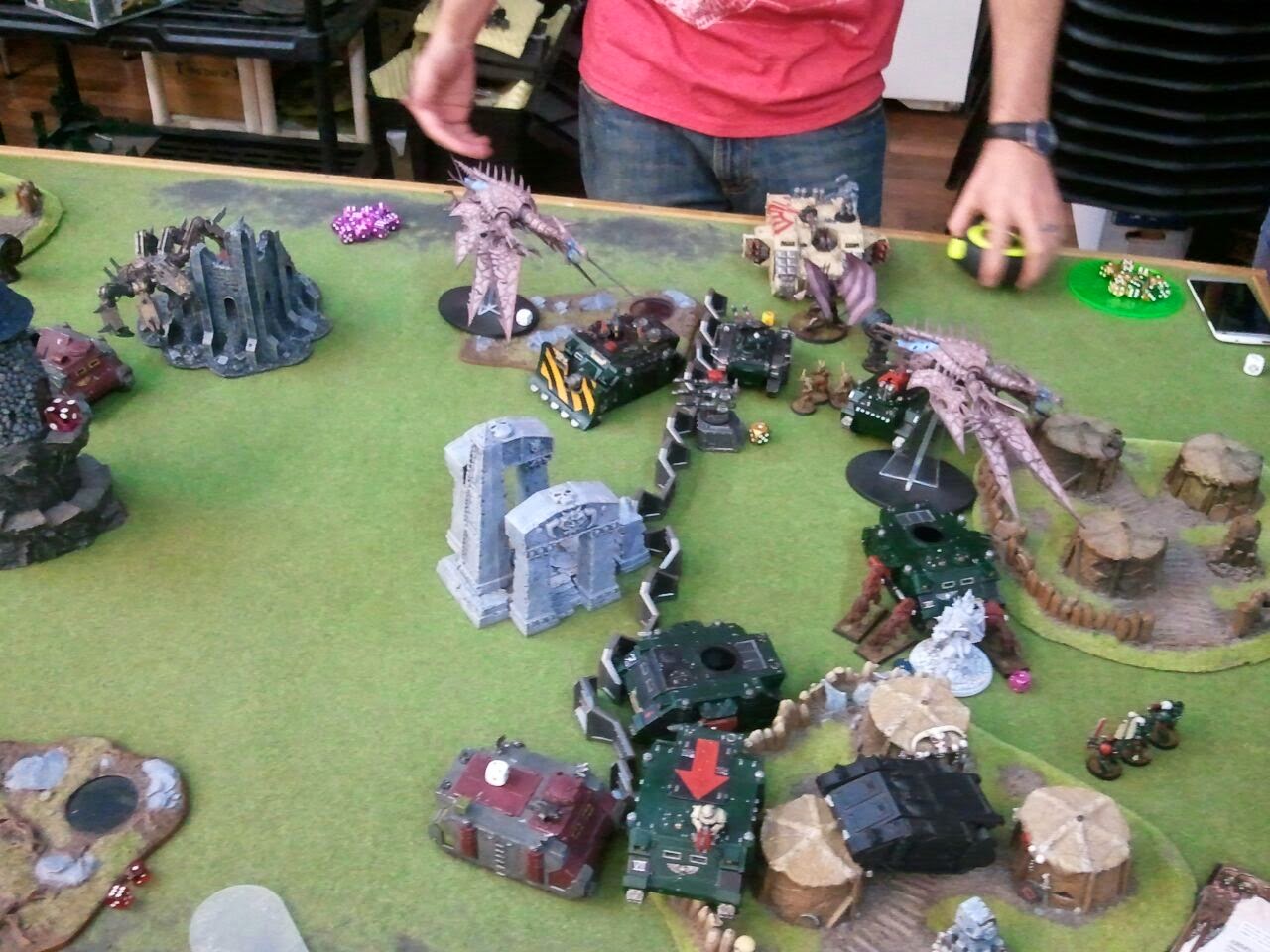 Turn 4: He moved one Rhino on top of the objective near the huts, and blocked my Rhino with his. His Razorbacks repositioned to block my units from getting to the objective. One Razorback shot and blew up my Rhino. His Rhinos shot and killed 2 of the 5 Chaos Space Marines that were inside. He shot everything else he had at the Plague Bearers and Flesh Hounds but failed to kill anything. His Termies wiped out the Obliterators and consolidated towards the objective but failed to make it into range. They did however attempt to block my Chaos Space Marines from making it to the objective. At this point Makers decided to concede knowing that my units would just mop up the rest of his in the next turn.
Things I Learned
1. Summoning units of Daemons is awesomely fun but OP if they end up getting the Objective Secured rule.
2. Spell Familiars are so good they are probably broken.
3. Vehicles truly are more resistant and I love it. I am a huge fan of mech armies and I'm going to be super happy to see that they are viable again.
4. The psychic phase is interesting. I can see it really getting broken with higher amounts of warp charge. At low levels it seems pretty balanced. Overall you're going to see a lot less successful casting happening. A warp charge 1 power needs 3d6 thrown for a roughly 90% chance of going off. A warp charge 2 power needs 6d6 thrown to have a roughly 90% chance of going off. That gives you 1 in 4 chance for a Perils and is likely most of the dice in your pool. That being said I think about 10 warp charge is going to be the standard for armies in this edition. That should allow you 1-3 powers per turn. Below is a chart for casting percentages incase you were interested.