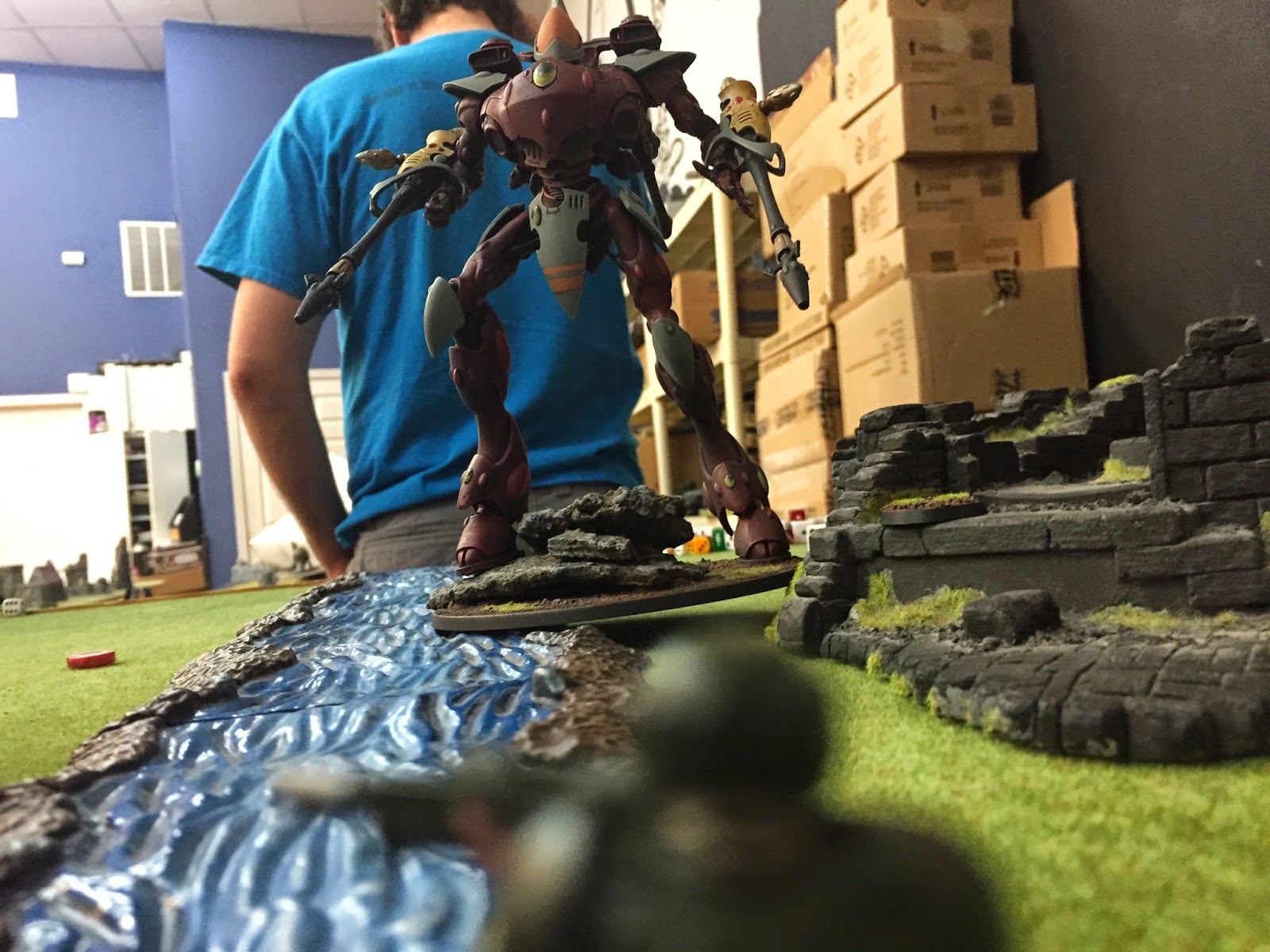 Adam (Capnmoe) and I decided to do a test game of the new Eldar Codex vs my 1850 Astra Militarum DieCon list.  I have never seen so much D in one game.  Before I go into what happened in the game, lets take a look at the army lists and a few notes about the units:

Since DieCon is quickly coming up we decided to do one of the missions from the packet that was recently released.  We settled on Mission 2.  The Primary Mission was Kill Points with a modification of being able to earn an extra 2 points for every force org slot type eliminated from the primary detachment.  If players did not have a unit in a slot they gave those points up.  The secondary was a modified set of Maelstroms. Bonus Objectives were Slay the Warlord, Solo Blood, and Line Breaker.  To see the mission in detail, visit this link and check out mission 2.

Adam won the roll off to decide who deploys first and choose to deploy first.  He then decided to go first and I failed to seize.  There was three Maelstroms objectives which I have circled in the below picture (they are number 1, 2, and 3 from left to right).  We rolled for Night Fight and there was in fact Night Fight. Let's get into the actual game now.

Battle Report After the Jump!

Adam had the top of the turn and rolled up hold Objective 1 and have a scoring unit in the enemy deployment zone.  Adam unloaded firepower into the rightmost Chimera and killed it and otherwise advanced up the table.  His Warp Spiders seemed to be in a wonderful spot to be roasted by a Chimera on my turn...  Surprises were about to happen.  Adam concluded his turn and scored one Maelstrom. For my first Maelstroms I rolled up hold Objective 2 (center of the board) and have a unit in the enemy's deployment zone.  Not likely to get these this turn.  I advanced my Chimera on the left side of the board up thinking I would get a wonderful Heavy Flamer shot on his Warp Spiders while my Conscript Blob moved forward and my Company Command Squad (bottom right of my deployment) moved towards the cover of the near by forest.  In the shooting phase my Sabres did their job and used an ignores cover order to pop a Wave Serpent.  I then declared, with glee, that I was going to shoot my Chimera's Heavy Flamer at his Warp Spiders.  Adam then broke my heart, soul, and will by informing me that Warp Spiders have a new rule called Flicker Jump which allows them to move after being declared the target of a shooting attack.  My Wyverns still took out a good number of them but I still am very bitter about this turn of events.  My Shadowswords D blast scored a hit on his Wraith Knight which he promptly covered saved after I rolled a non 1 or 6 result on the D table.  I ended my turn and scored 0 Maelstroms. 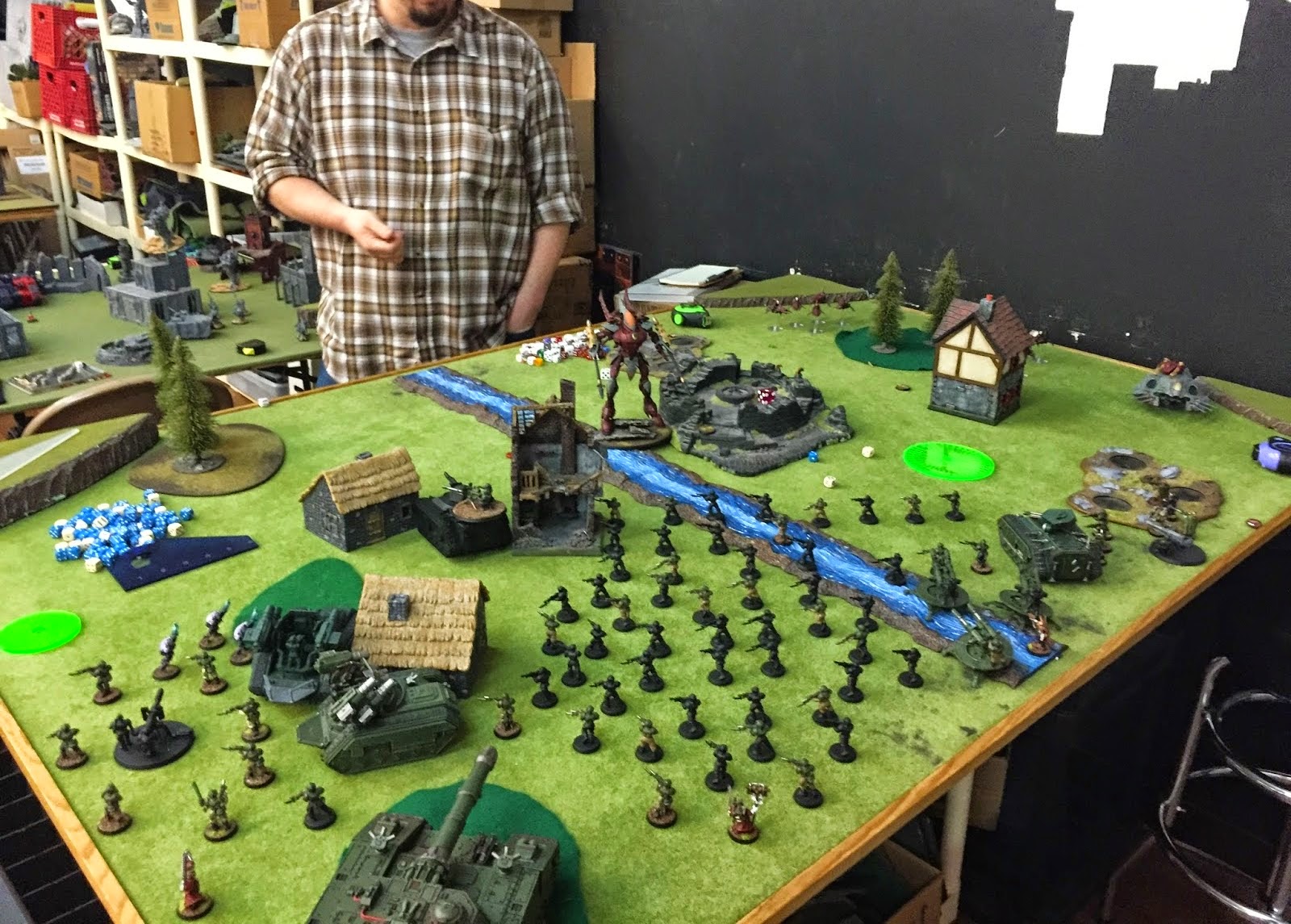 Adam rolled up his Maelstroms and needed to score Objectives 2 (Center) and 3 (Near his deployment) this turn.  His Wraithguard Star showed up and had zero scatter due to the Webway Portal and he was able to fit them near my Shadowsword.  Uh-oh.  The Shadowsword, a Wyvern, and all but the Lascannon in the Company Command Squad all died this turn.  Adam Positioned some Dire Avengers to score Objective 2 and some Jetbikes to score Objective 3.  Adam ended his turn and picked up 2 Maelstrom points.  At this point he is up 3 to 0 in Maelstrom.  The only good thing about his turn for me was that he forgot to charge my Chimera with his Wraithknight.

I rolled up score objective 3 (near his deployment zone) and have a unit in his deployment zone.  Not good.  The Maelstrom gods have deserted me thus far.  My Valkyrie arrived from reserve this turn but my Vendetta was nowhere to be seen.  My single Wyvern got a decent shot off on one of his Jetbike units reducing it to two Jetbikes while my conscripts, with the help of "First Rank Fire, Second Rank Fire," managed to get 149 shots at his invisible Wraithguard Star.  Of those 149 shots he took 2 wounds.  One Wraithguard died and one wound on a Farseer.  I ended my turn and picked up 0 points again leaving the Maelstrom score still 3 to 0 favoring him. 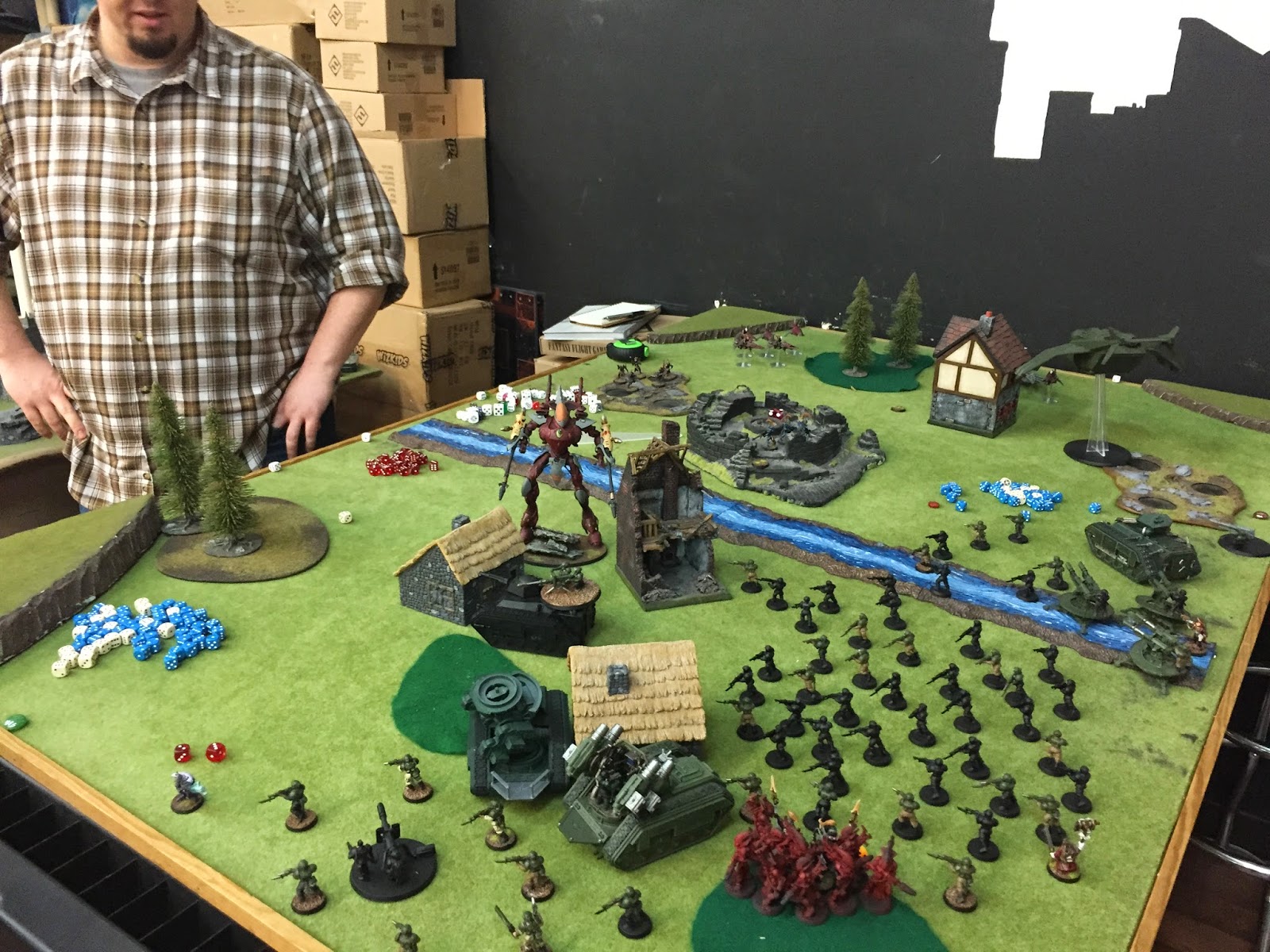 Adam continued to roll well on the Maelstrom table and needed to kill an enemy unit and have a unit in my deployment zone.  D Weapon Flamer weapons ate my Warlord and most of his unit (though they did bravely stay in the battle) and his Wraithknight decided to charge the Conscript blob.  Something (I believe the unit of 5 Jetbikes) put a Hull Point on the Valkyrie.  Adam ended the turn and picked up 2 more Maelstrom points making it 5 to 0. 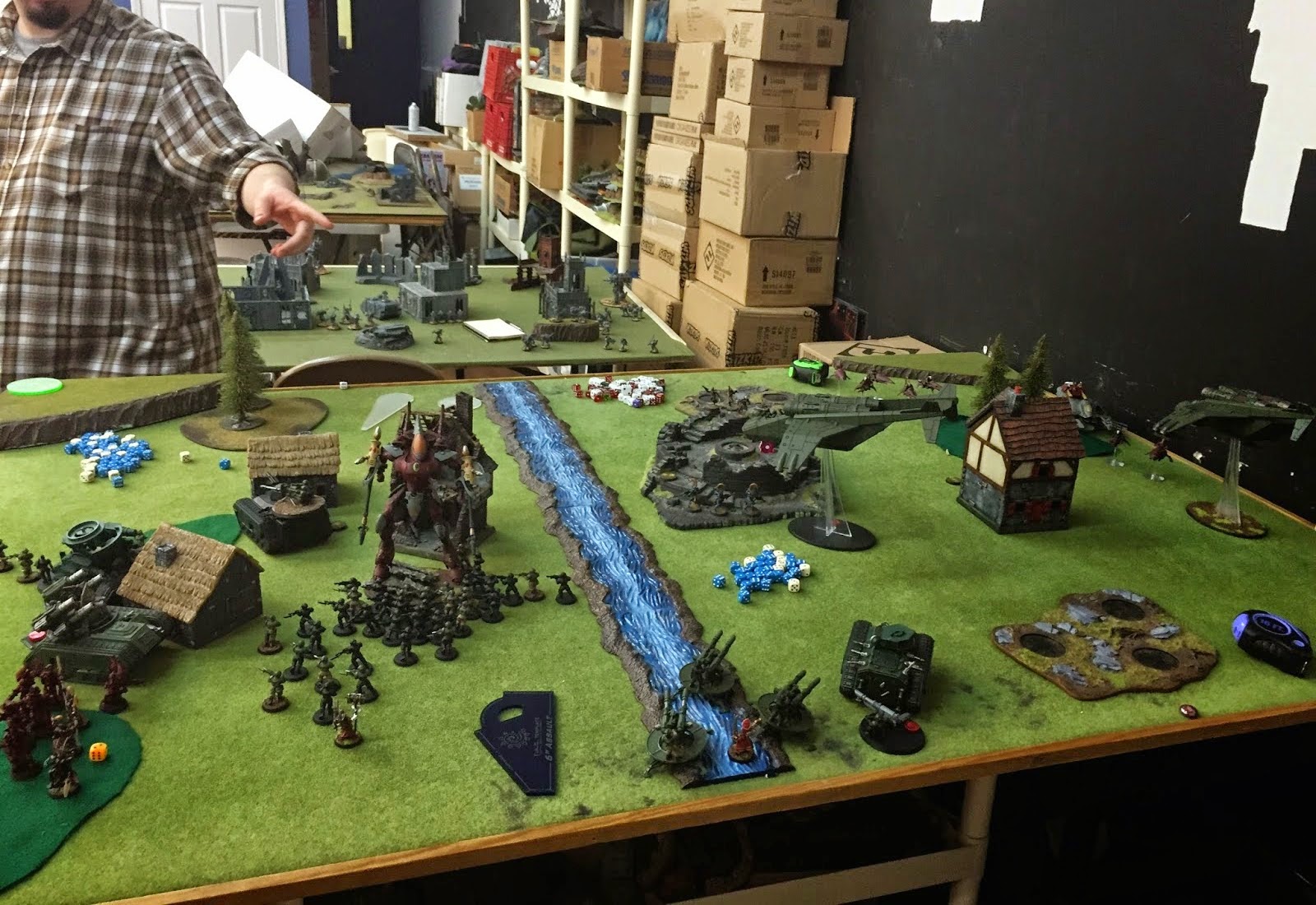 I rolled hold Objective 2 and kill an enemy unit.  Finally, objectives I can score!  My Vendetta also decides to show up to fight.  I put my Valkarie into hover and get it into scoring range of objective 2.  Now I just have to shoot 3 Dire Avengers off of the objective and I will score 2 points.  My Vendetta deletes the two Jetbikes remaining in the unit that took wounds from the Wyverns and the 3 Dire Avengers are erased from this plane of existence.  The Wyvern took a shot at the Wyches and killed every single one of them.  I ended my turn and scored my first 2 Maelstrom points of the game making it 5 to 2.

Adam rolled to hold Objectives 1 and 3.  I believe he lost sight of these objectives this turn as he moved his bikes away from objective 3 to the center of the board and had nothing in range to have a chance at objective 1.  My last Wyvern bit the dust and a one more man of the Warlord's squad were roasted.  Adam scores neither objective this turn leaving the score still 5 to 2.

I rolled to hold objective 3 and have more units in no mans land than my opponent.  At this point, middle board control was mine and Vendetta was able to hover and hold objective 3.  I took his last Wave Serpent out and claimed two Maelstorm points while the blob still held on vs the Wraithknight.  The Maelstrom score was now 5 to 4. Adam's objectives for the turn are to hold Objective 2 and have a unit in my deployment zone.  Shooting from his Jetbikes is able to knock the Valkarie out of the sky and the Wraithknight finally defeats the Conscript Blob.  His Jetbikes hold the middle objective  and the Wraithguard Star is still in my deployment zone giving him both Maelstroms for the turn.  The Maelstrom score is now 7 to 4.

I needed to hold Objective 1 and destroy an enemy unit.  My Chimera unloads its Infantry Squad onto Objective 1 and then charges forward through the water (hurray Chimera ignoring dangerous terrian because its water) and throws out its heavy flamer into the Jetbikes.  With the help from my Vendetta and the Sabres the Jetbikes are destroyed.  The Platoon Command Squad also exited the Vendetta and killed the Dire Avengers with extreme prejudice.  At this point, Adam has just his Wraithknight and the Wraithguard Star left on the table.  I score both of my Maelstrom points making it 7 to 6.  We roll to see if the game goes on and it does. 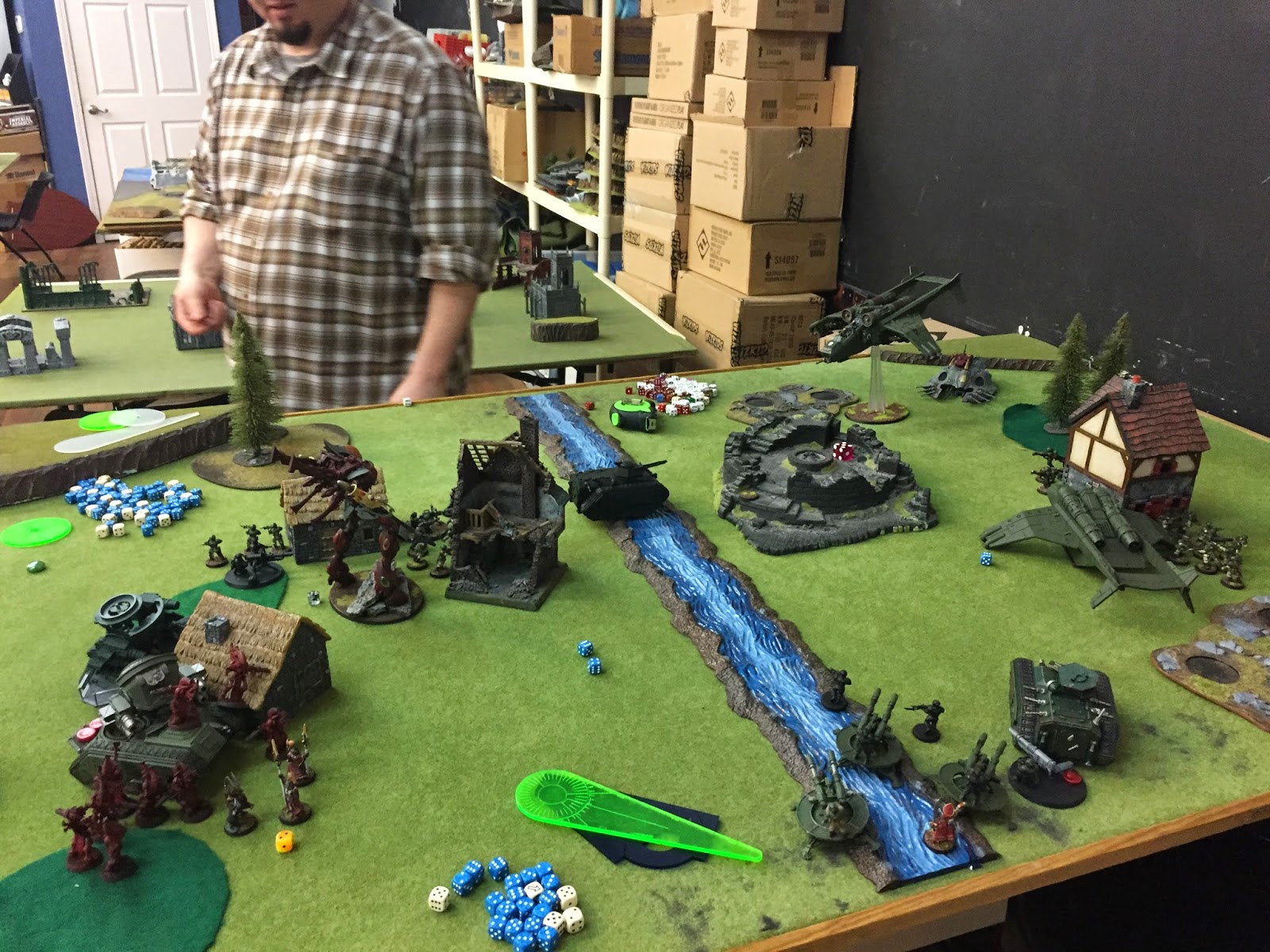 Adam rolls to hold Objective 1 and have more units in no mans land than I.  His Wraithknight kills what is left of the Warlord's squad and the Wraithguard advance towards the Squad holding objective 1.  Adam is not able to score either of his objectives this turn leaving the score at 7 to 6.

I roll up that I need have a unit in Adam's deployment zone and that I need to kill an enemy unit.  The first one would be easy and the second almost impossible.  I unload my entire army into the Wraithknight and cause 2 wounds.  I score one point leaving the score 7 to 7.  We roll to see if the game ends and the game goes on to turn 7.

Overall it was a good game and the new Eldar are really good.  I am sure we will be seeing them alot in the near future.
An awesome post by Unknown