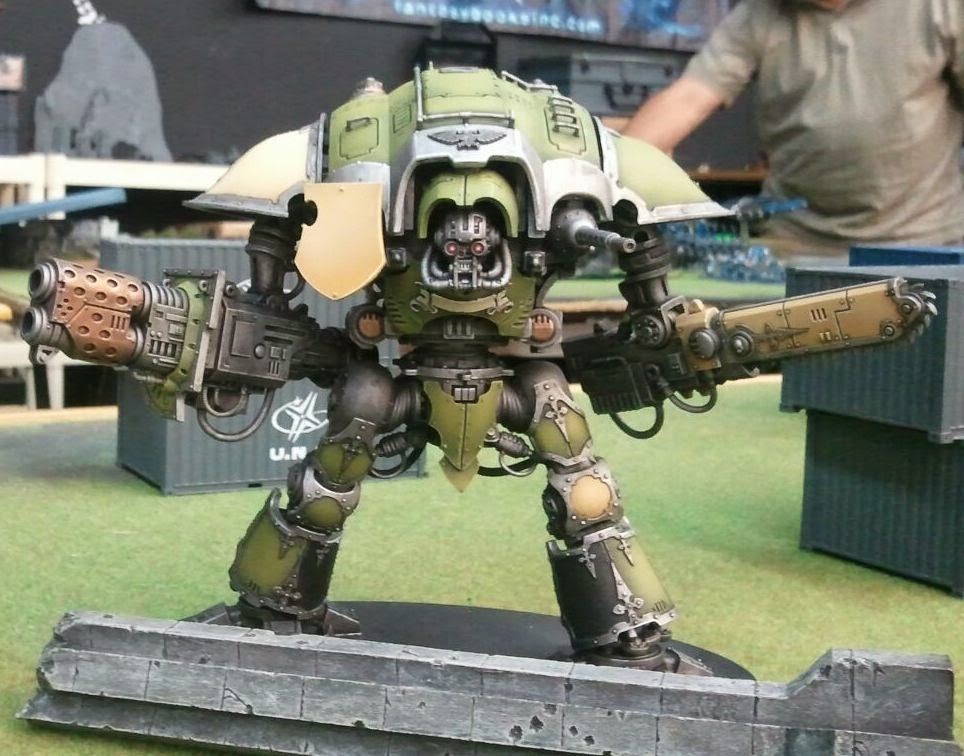 I finished all the painting on the Imperial Knight and he turned out fantastic. Now I need to finish the base and get the decals on. I ordered some Micro Sol and Micro Set. Once they arrive I'm going to take the advice I got from my last post and seal the model with lahmian medium or a matte spray once I get them on. 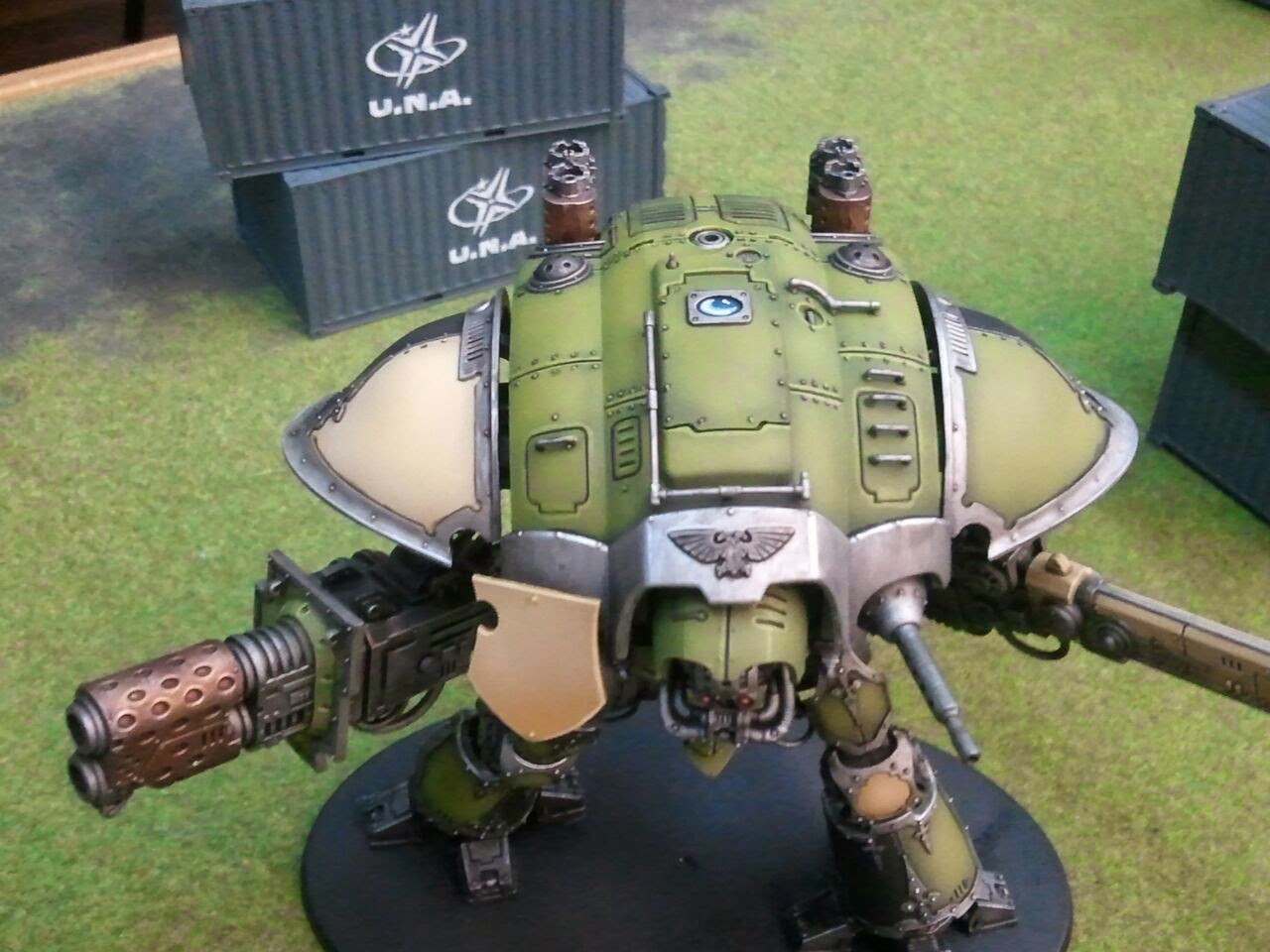 Last night I got this guy on the table for the first time. Sadly, due to my opponent, it may have been one of the most awkward and unenjoyable games I've ever played. To start, his list was about 2728 points from what I can tell. The league is supposed to run at 2000 points. That combined with his sour mood and whiny antics really just put me off. At any rate, here's a quick battle report.

My Opponent's List From What I Gathered While Playing and From His Comments (Tau/Farsight Tau/Chaos Space Marines):

He never said he was running Farsight Tau but he did say his army was bound. This is the only way it could be bound with 4 Riptides. 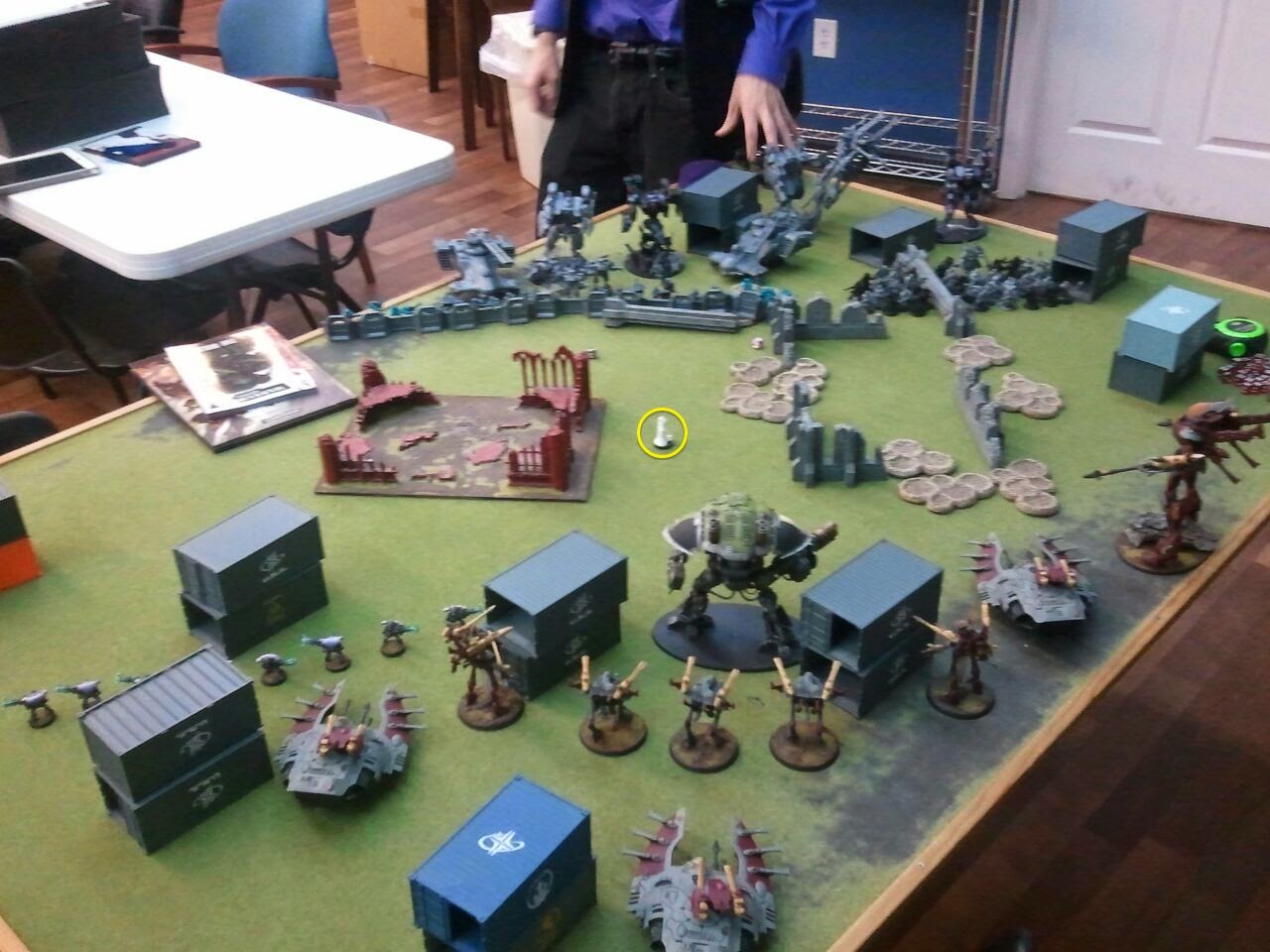 He got to choose the table and I got to choose the deployment type. I won the roll to deploy first. Night fight was on but my warlord trait gave all my units Night Vision. His warlord trait gave him a +1 to seize and could reroll his reserves. The objective and our deployments can be seen in the picture above. He failed to seize and the game began. 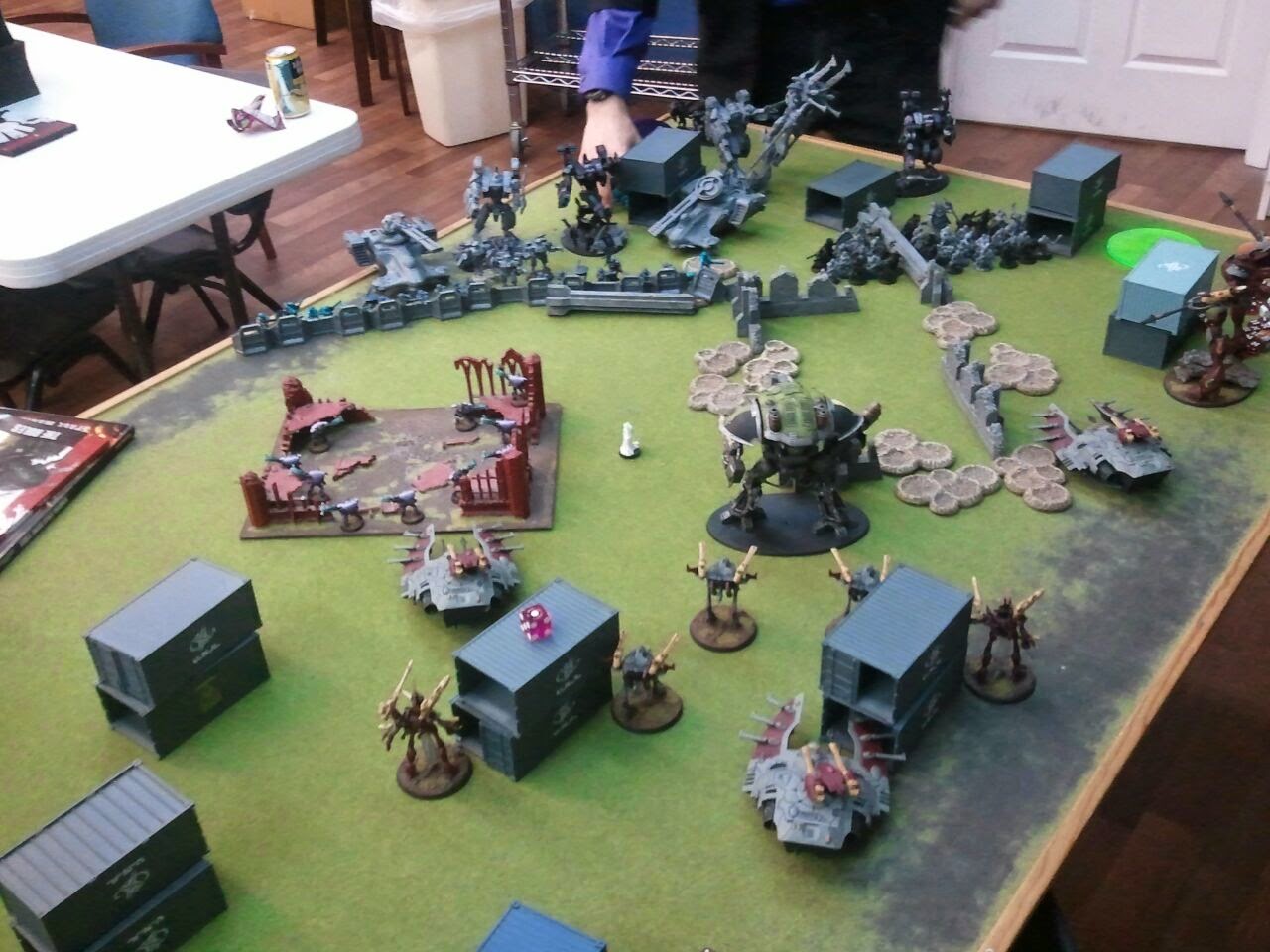 Turn 1: I pushed most of my units forwards and fired almost everything into the normal Hammerhead killing it for first blood. One Wave Serpent shot at a unit of Fire Warriors killing 4 and pining the unit. My opponent at this point seemed a little discouraged but he wasn't angry or or crazy yet.

One of his Riptides failed its Nova Charge and took a wound. He moved the 2 units of Cultists forward as well as his suits. In his psychic phase he cast the Summoning and Perils'd. He managed to roll a 6 on the table though so he turbo charged himself. He tried to deep strike the unit near my Wraithnight and misshaped. He rolled a 1 on the table and the unit was destroyed. It was at this point that he really started loosing his shit. In his shooting phase he fired everything he had at one of my Wave Serpents and only managed a crew stunned result. I think he also killed 6 Warp Spiders. My saves this round were pretty awesome. I guess he felt like he should have wiped my army off the table by this point. Considering his list Im sure he did. 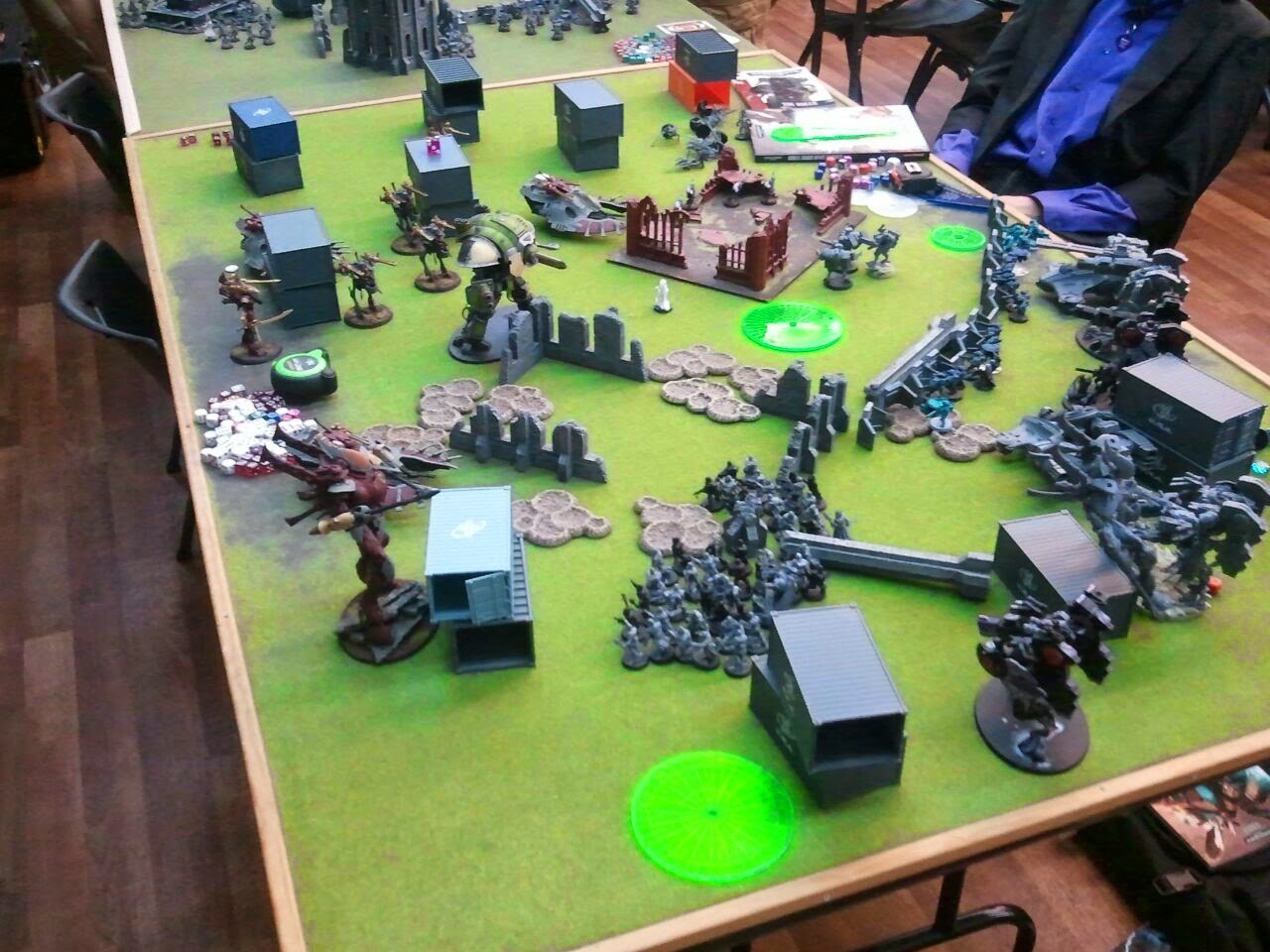 Turn 2: In this round all he did was stare at me with a pissed off look and act stand offish every time I asked him to roll his saves. At this point, I put serious thought into telling this guy to fuck off and quitting. I felt like that would be rewarding his bad behavior so I stuck it out. I moved the Warp Spiders, Wraithknight, and Imperial Knight forward. I took a lot of shots at Longstrike's Hammerhead and took 2 hull points from him. Warp Spiders killed one Crisis Suit. The Wraithknight shot and assaulted his unit of Cultists with the Lord, killing a handful. He failed to do anything back to me but he passed his leadership check. Warp Spiders assaulted the suits and did nothing. The Imperial Knight attempted to assault the suits needing 5" but rolled a 3.

In his turn Shadowsun and her 3 fusion suit friends deep struck near the Wave Serpent containing my Warlord. They would blow it up and cause one wound to my Spiritseer. In his psychic phase he cast the Summing and Perils'd. He again rolled a 6 and got supercharged. The summoned unit misshaped and went into ongoing reserves. At this point he started throwing the Blood Letters that he tried to deep strike bouncing them off the table in a fit of rage and frustration. Longstrike took a hull point from the Imperial Knight. The Wraithknight killed a handful of models and he did one wound in return. He made his leadership and the combat continued. It's also worth noting that 3 of his Riptides failed their Nova Charges and took wounds. 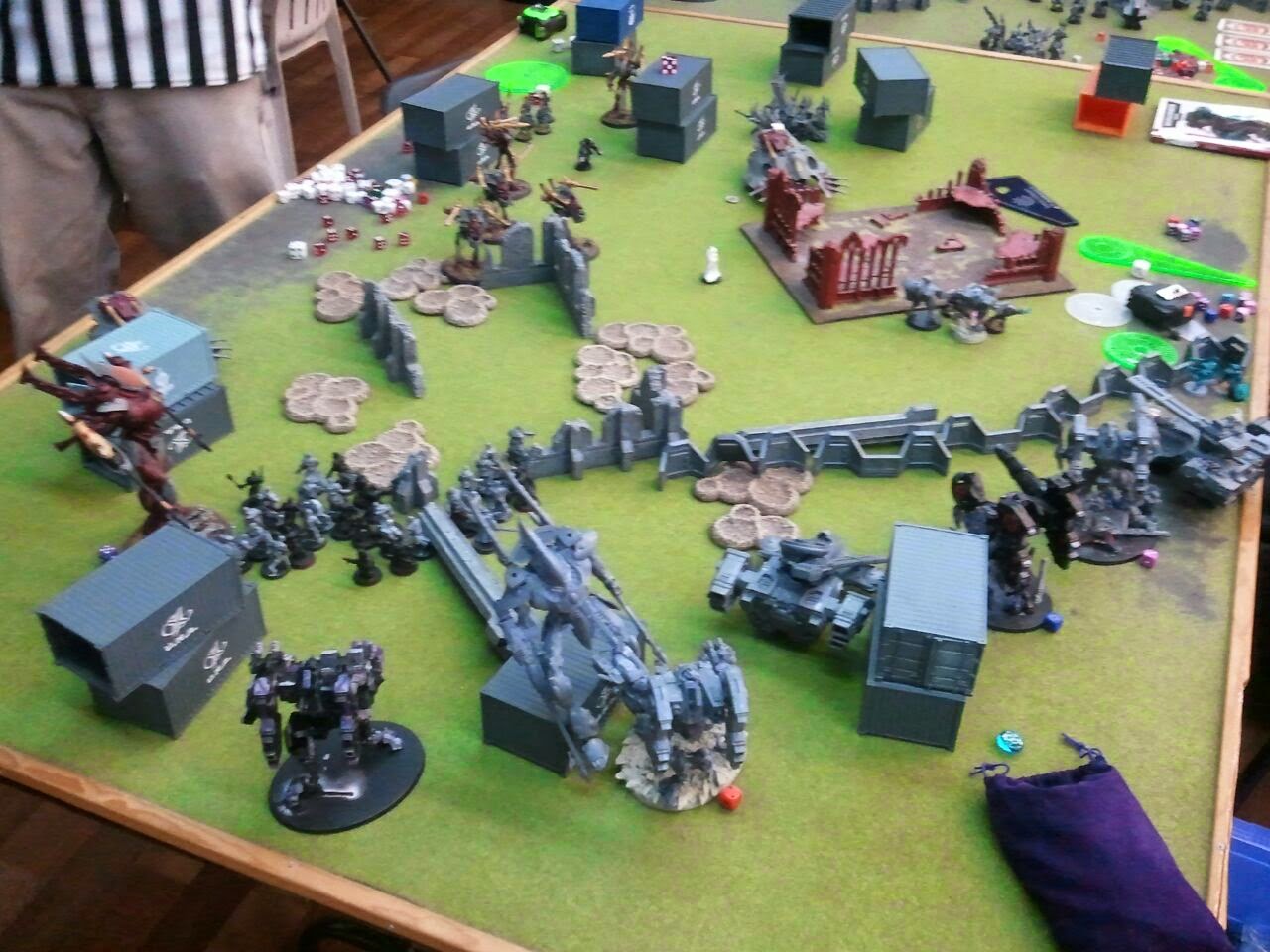 Turn 3: This turn would see me wipe out Shadowsun's unit with shots from the Wraithlords and dire Avengers. Warwalkers tried to take out Longstrike and failed. Wave Serpents killed Fire Warriors. The Imperial Knight took out some Fire Warriors and charged his Warlords unit. His overwatch managed to take the Knight to 1 HP. In combat he hit only one time killing a Fire Warrior. He then attacked using EMP grenades. He seemed to think his Cadre Fireblade also had EMPs and managed to take the last hull point off of him. Luckily the catastrophic explosion that occurred killed his warlords unit and what was left of the unit next to it. He was less than thrilled about it. Wraithknight killed another handful of cultists and held in combat.

His unit in ongoing reserves deep struck near one of my Wave Serpents in the back field. He chose not to move anything. In his psychic phase he cast Summoning again, perils'd again, and took a wound this time. Note that he rolled a 1 on the Perils chart but passed his LD test. He tried to deep strike the summoned unit in the exact same spot he had the previous 2 and misshaped again. He again rolled a 1 and the unit was destroyed. That was his breaking point and he rage quit. Final score 2-0. I don't know what that guys deal was but I don't have any desire to play against him again any time soon. 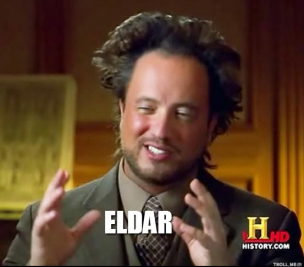