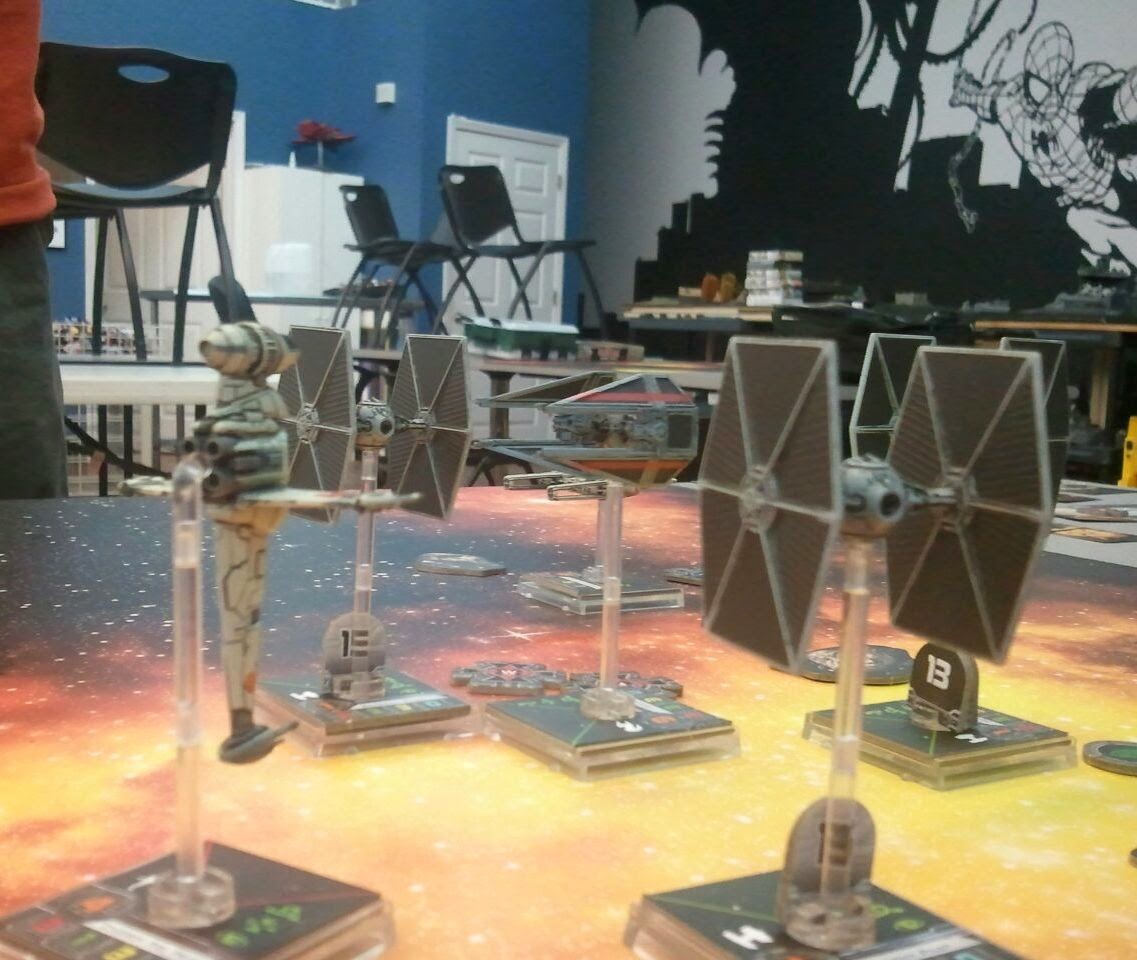 Hooray!!! Fantasy Books and Games is finally running an organized X-wing league on Wednesdays. It started two weeks ago and I've been having a blast. I really needed a break from 40k too. After all my prep for DieCon, I was getting burned out. I hadn't had a chance to play X-wing since shortly after last years regional. So, I added a few new ships to my collection (2x B-wings, HWK-290, and an E-wing) and dove in full force. I had forgotten how much I love this game. We play two games per night at either 75 or 90 minutes each. The league uses the official X-wing dogfight tournament rules for game scoring and at some point plans to do some Epic play. You can bring a new list every night but you have to use the same list for both of your games. Here's a recap of the first 2 weeks.

This week I was focused on relearning the game. I took Dutch and Garven which were staples of a lot of my old lists, simply because I was used to running them and they have good synergy. I went 1-1 this week. The win was against a Firespray, Lambda Shuttle, and Tie Fighter/Interceptor combo. The loss was to a Tie swarm with Howlrunner, 4x Academy Pilots, and Sontir Fel with Push the Limit. Tie swarms are ridiculously strong.

I love me some Chewy. I had brought the same YT-1300 build to regionals last year and knew just how powerful it could be. The B-wing had performed the best out of all of my ships the week before So I wanted get both of them on the table. I went 2-0 this week. I played against a Tie Defender/Phantom/Interceptor combo and an Elite Tie/Interceptor Swarm.

Each week the league organizer passes out items from the Fantasy Flight Game Night Kit which is nice. So far I've acquired 5 acrylic stress tokens and an alternate Gold Squadron Pilot card. I'm really hoping this league stays a regular thing at the store. I could totally see myself alternating between the 40k league and this.

Going into week 3 I feel like I've got a good handle on the game again. I'm going to try and get all of my newer ships on the board. I've heard rumbles on the inter-webs that the HWK-290 just doesn't cut it. I guess I'll find out tomorrow. Here's the list: