The Descent of Angels...

As we know, I have been working on a multitude of models for the past few weeks ranging from dreadnoughts to landraiders and various deathwing load out style terminators. Obviously there is a theme going on here... I will let you folks figure it out. Needless to say there is large, open, theme based Apocalypse game at my LGS. Of the Lonely Havocs crew, 3 of us(Cj "SeeJay" he also goes by Fun Dip , Andrew "The Law" , and Travis "Spazgar" ; all contributors to the blog) will be rolling in an all Space wolf team.
LEMAN BE PRAISED!!!

Should be pretty cool honestly to see a whole army of one codex. They will be receiving reinforcements from me in the form a Landraider squad with one of each codex variant and one Predator Assassination squad...SOMEONE WILL BE GETTING THE D!!!!

I know they will have one Shadowsword Super Heavy Tank, one Aquila Strong Point, some cool Forge World jazz including Sicaran Tank, Fire Raptor, Scorpius Whirlwind, and a Malcador. Plus at least 10 drops, friggin' wolves....

As for myself "The Fist", dan "Squoze" (check him out on reddit. He has his own sub reddit; MINI SWAP), Spencer "Slender", and Brandon "Beefy McArmcandy", will be running a combined force of Dark Angels, Blood Angels, Imperial Guard...or Astra Militarum...What an awful name, I'm just going to throw that out there. I hate it, they will forever be the guard and not this new garbage...anyways... and o uh dirty, mean Grey Knights. Not exactly the best theme but it makes sense that multiple factions would all receive the same distress call and rush to the Southern Front.

For my Teammates, I know for sure that we will have a Shadowsword as well, 1 Baneblade( my beautiful arctic camo master piece!!!), no less then a dozen Leman Russ tanks of various variants( say that 5 times fast!), 2k of jump pack marines variants, Deathwing, Ravenwing, Legendary Kaldor Draigo and his Paladins, 5 Storm Ravens, 4 Storm Talon, 1 Nephilim Jet Fighter and a Partridge in a Pear Tree... hehe 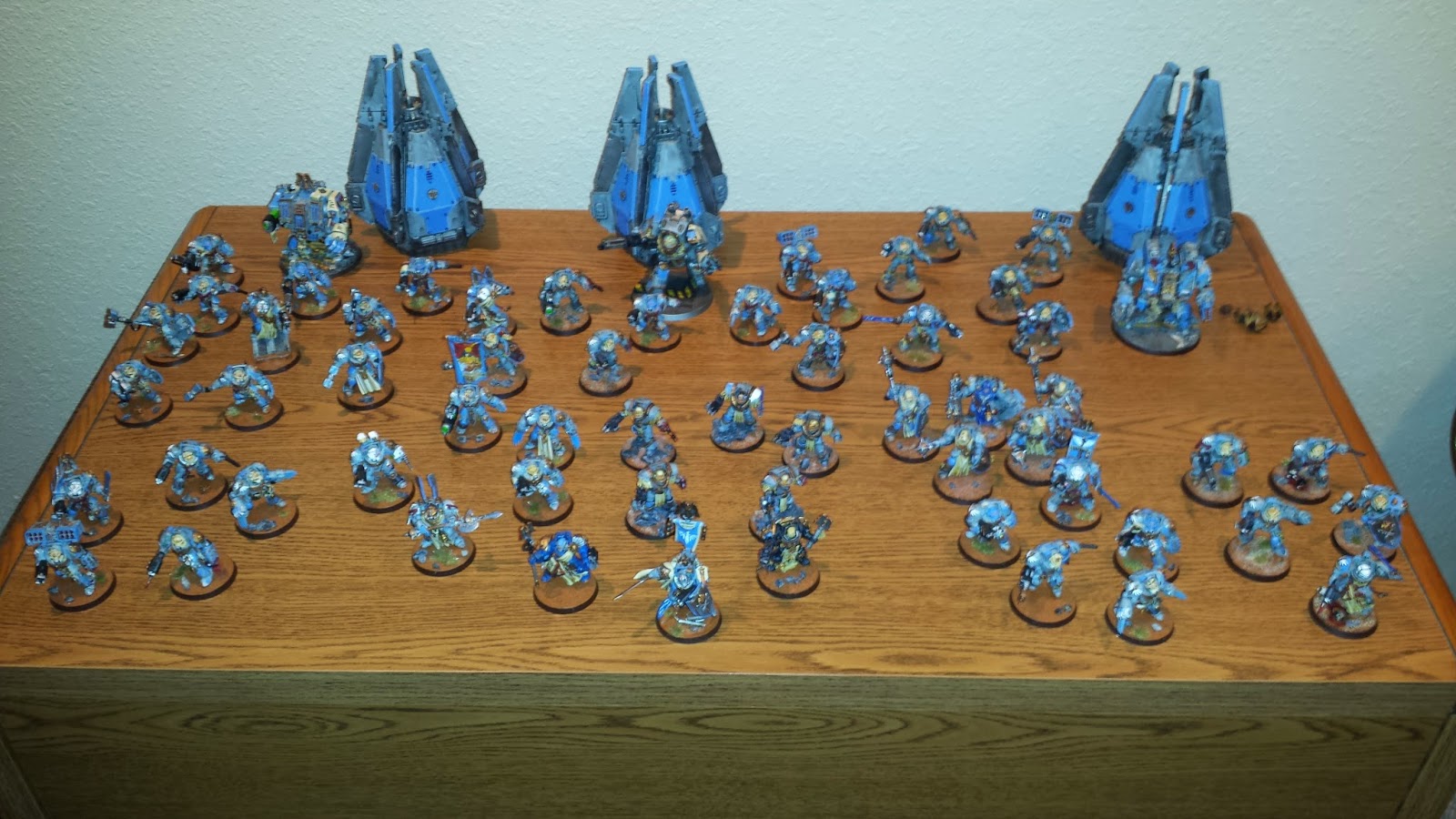 All 58 terminators and 3 dreadnoughts..that's right, 58 TERMINATORS!!! 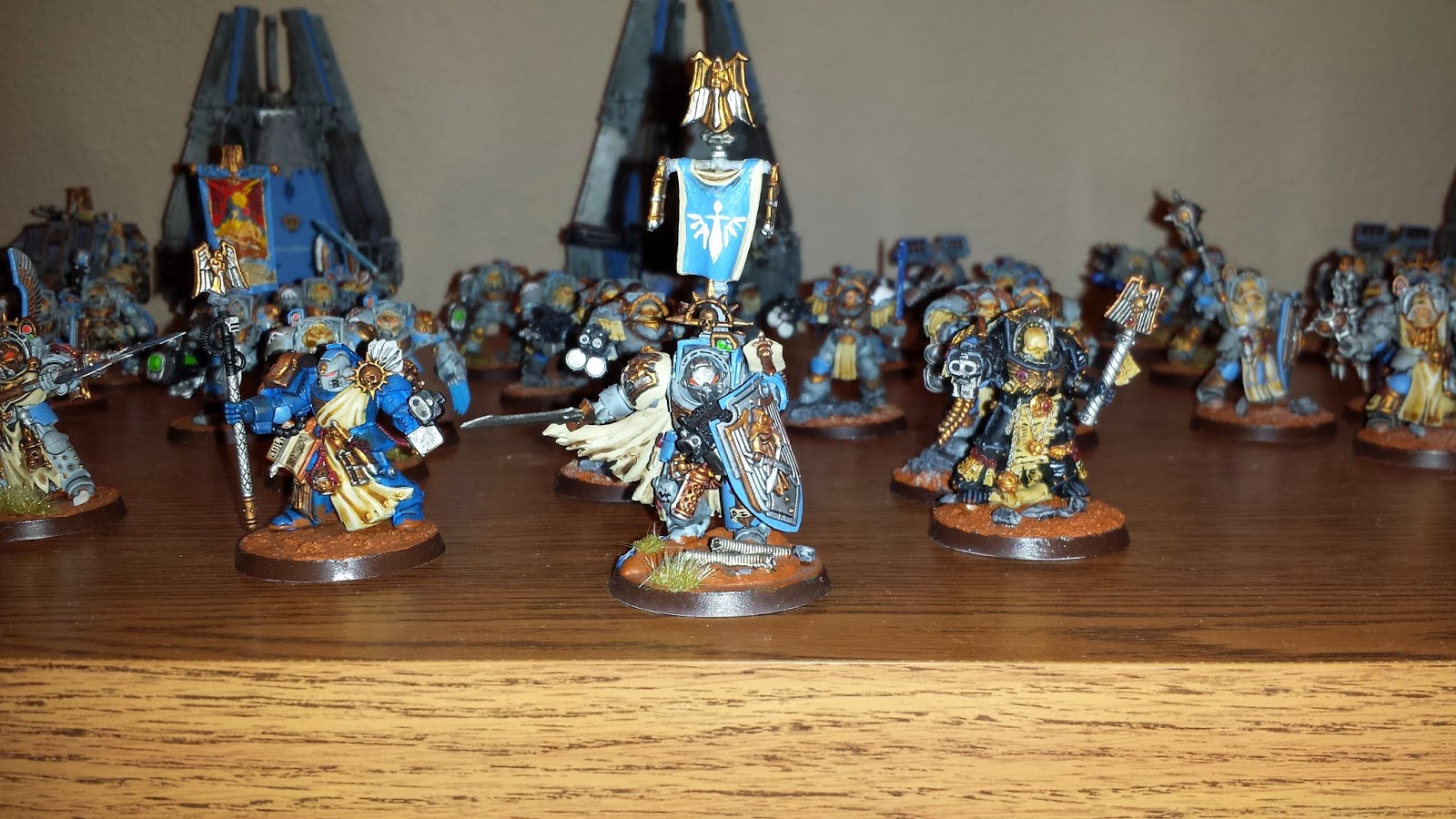 The Leaders of the Deathwing Company, The Hunters of The Fallen, Judgment Incarnate, with combined experience of a hundred campaigns.
That roughly comes out to 4000 points...hoping I get to actually play 4k. Obviously the plan is to deep strike them on top of an objective and take it by force!
I know Ironclad aren't DA but I wanted another Dreadnought but I don't have another Venerable dreadnought modeled or painted appropriately and they are awesome!!!

Hopefully you guys think it is cool, I know I do. We plan to post about the aftermath so don't worry folks.