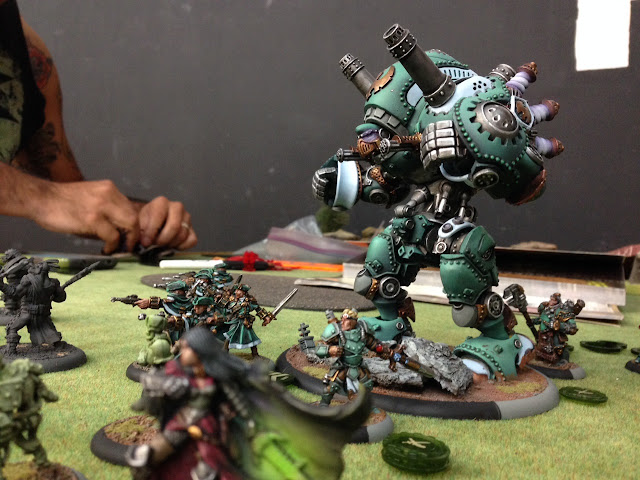 Warmahordes!!! I hadn't played a game since October of last year, and needless to say, I was really missing the game. I got a ton of Cygnar and Mercs stuff for Christmas last year that hadn't even seen the tabletop yet. At least with all the time between games, I managed to get most of it all painted. Fellow Lonely Havoc Sqouze and his Skorne took up the challenge. It was a 50 point game of straight up caster assassination. 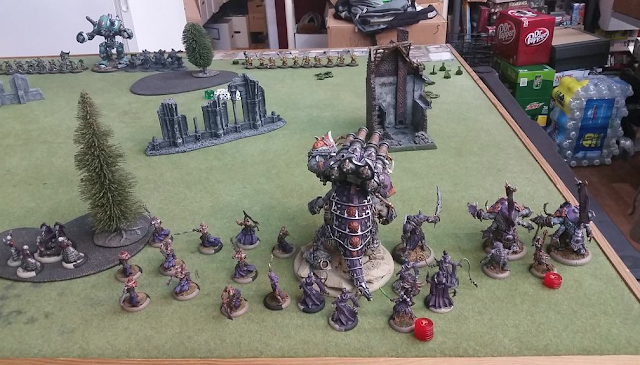 I won the roll off and deployed first. Here's the board just before the start of the game. 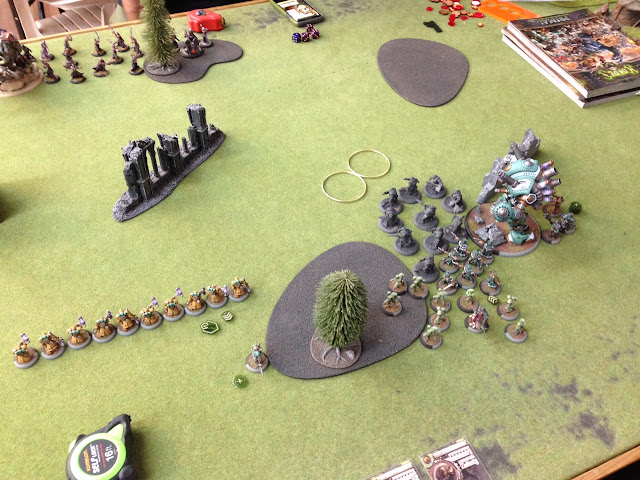 Turns 1 and 2:
Everything ran forward. The Journeyman cast Arcane Shield on the Forgeguard and Caine cast Snipe and Blur on the Stormwall. The Stromwall used Metal Storm to lay down some AOE's. 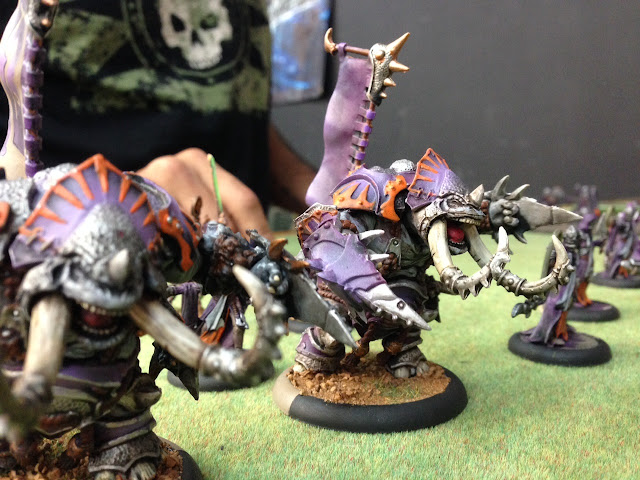 The Skorne tossed out some spells and also ran forward. 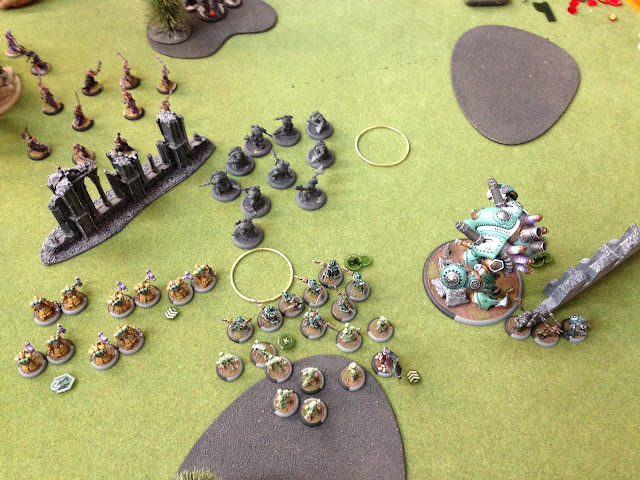 By the bottom of turn 2 we were finally getting close enough to each other to do something. 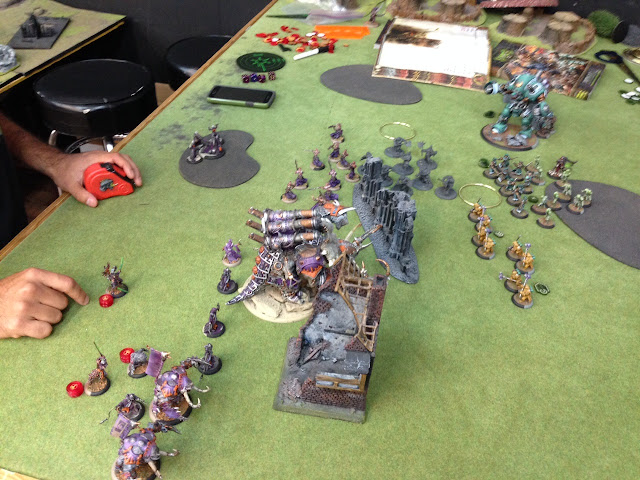 Nihilators charged the Boom Howlers and killed 2. Unfortunately they also managed to kill quite a few of themselves thanks to Berserk. Looking back now, it appears they also have Tough saves which I don't think my opponent was rolling. Shots from the Mammoth took out 2 Forge Guard. He also feated with Makeda. Any trooper models that died would come back to life within 3" of her at the start of his next turn. Which meant the Nihilators that died were coming back for a round 2. 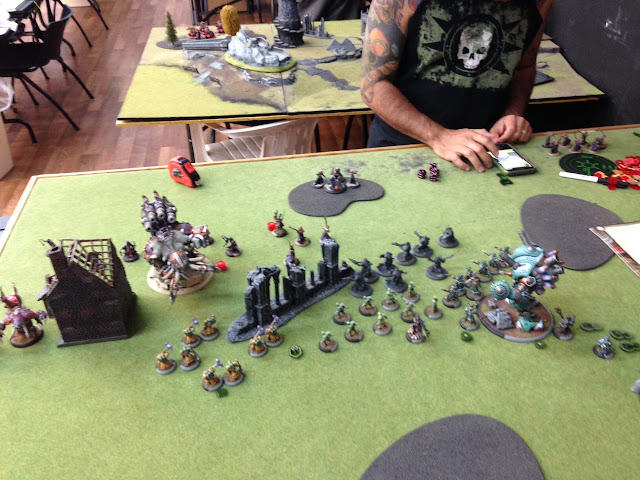 Turn 3:
This was a big round. My Forge Guard charged his Mammoth and put a big time hurting on it, nearly killing it. Shots from the Stormwall and Gun Mages cleaned up his back field. He managed to kill a big chunk of my Gun Mages and Boomhowlers. 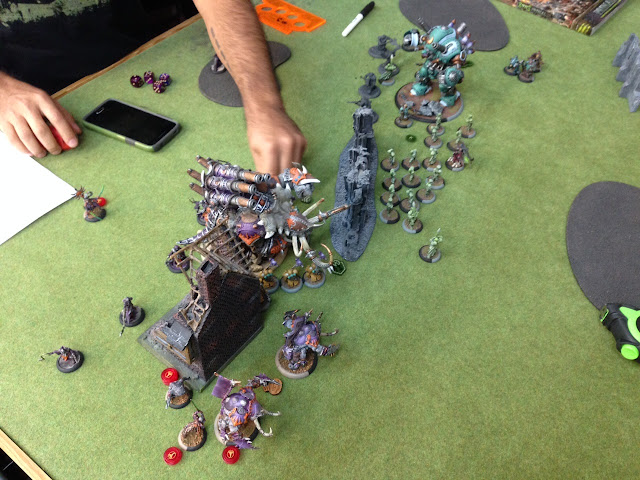 Turn 4:
By the end of this turn all the Skorne backfield had been cleared by Shooting from the Stormwall, Caine, and the Boomhowlers. What was left of the Forge Guard did a few more points of damage to the Mammoth. In his turn the Mammoth finished off the Forge Guard and one of the Titan Gladiators managed to destroy Alexia and her entire cadre of Risen aside from 2 crafted Thrall Warriors. The other took out my Journyman Warcaster. 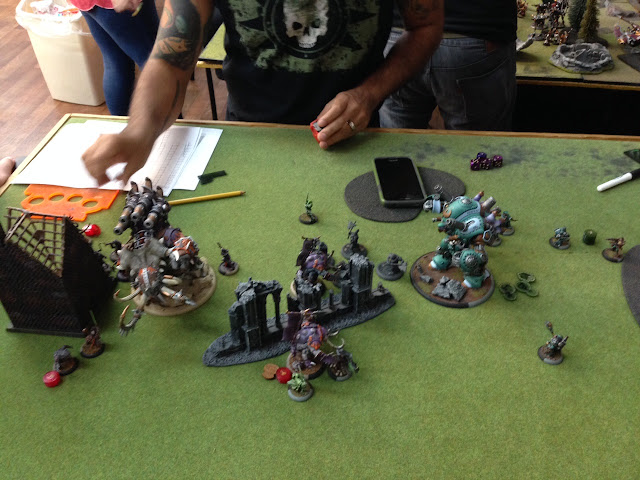 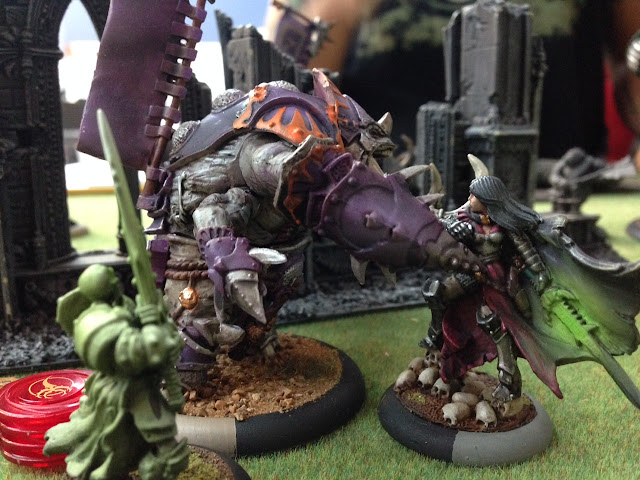 Turn 5:
A crafted Thrall Warrior finally finished off the Mammoth this round. Boomhowlers, the Stormwall, and Gun Mages took tried to stop the Titan Gladiators to little effect. They would take out the rest of the Boomhowlers and a Thrall Warrior. 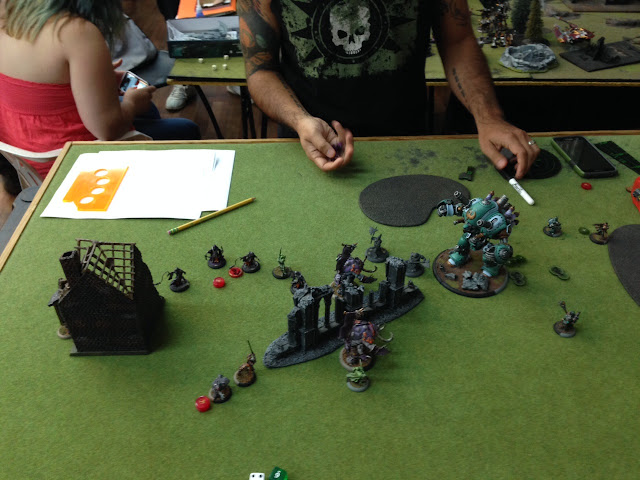 Turn 6 & 7:
His Titan gladiator nearly scrapped the Stormwall but in the end the Cygnar Gun Mages and Stormwall managed to take out his caster. Had my opponent not decided to make a suicide run with Makeda the game may have ended differently. It was pretty tight at the end. 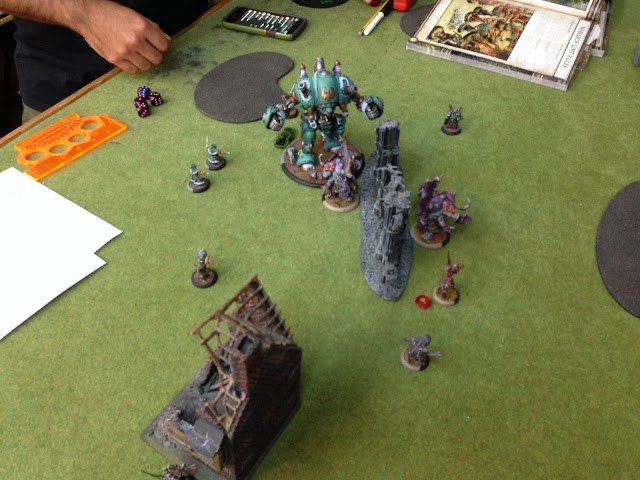 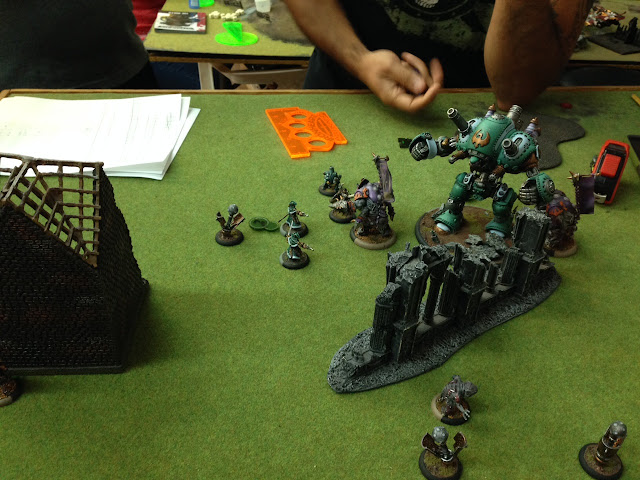 A Cygnar Victory! A big thanks to Sqouze for the great game. Can't wait for the next one.
An awesome post by Capnmoe