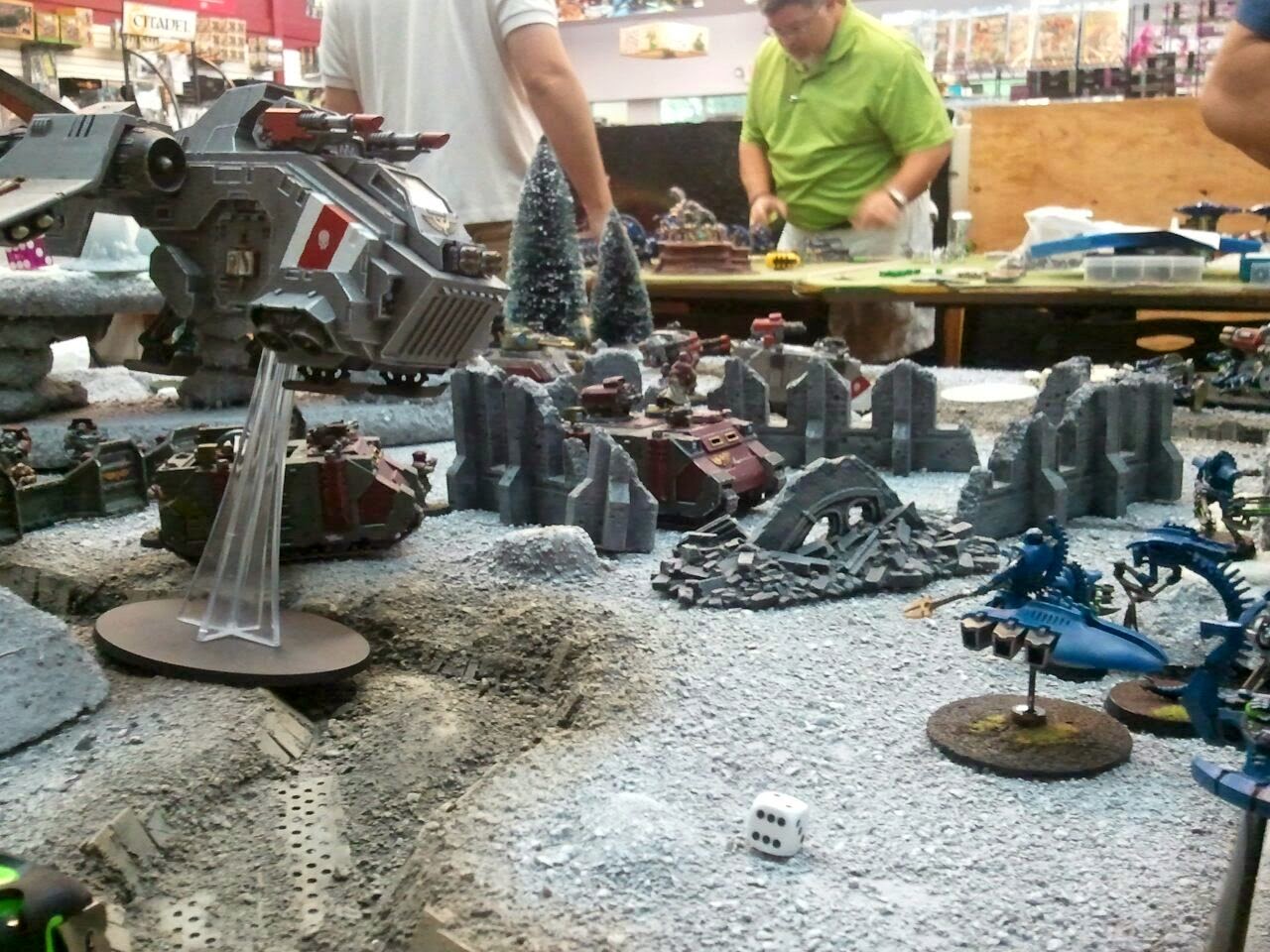 This was my last game using the old Grey Knights codex. I'm really gonna miss how good this army could be. This army was my first 5th edition tournament army and it won me quite a few. With the book being broken into Codex Inquistion, Codex Grey Knights, and Dataslate: Officio Assassinorum, chances of me still playing vanilla Grey Knights is going to be low. I love the aesthetic of the army but that doesn't help me very much in tournament play.

Fortification
Icarus Lascannon Emplacement (I know this isn't allowed without a fortification but I let it slide.)

My opponent won the roll to choose sides and I won the role to deploy first. We rolled and Night Fight was on. We both had the Warlord trait that adds +1 to steal initiative and reroll reserve rolls. He tried and failed to seize. Our deployments, objectives, and my first turn movement can be seen below. 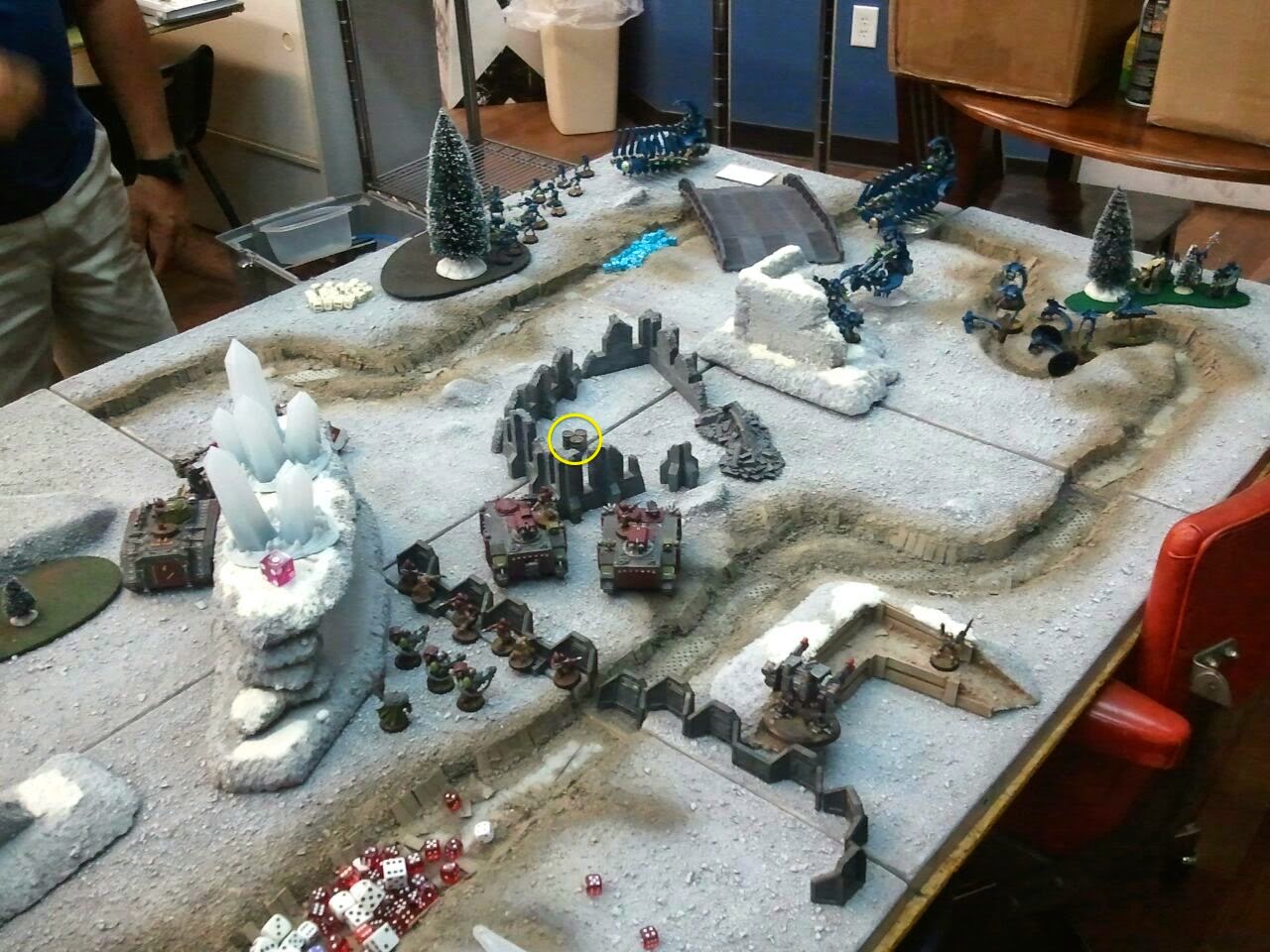 Turn 1: Orikan made everything difficult terrain for me turn one. Luckily it turned out to be not much of an issue. All of my vehicles pushed forward. In my psychic phase I cast Prescience and Perfect Timing. I penned the Doomsday Ark and shook the Annihilation Barge. I shot a few of the Immortals but only managed to kill too after reanimation protocols. 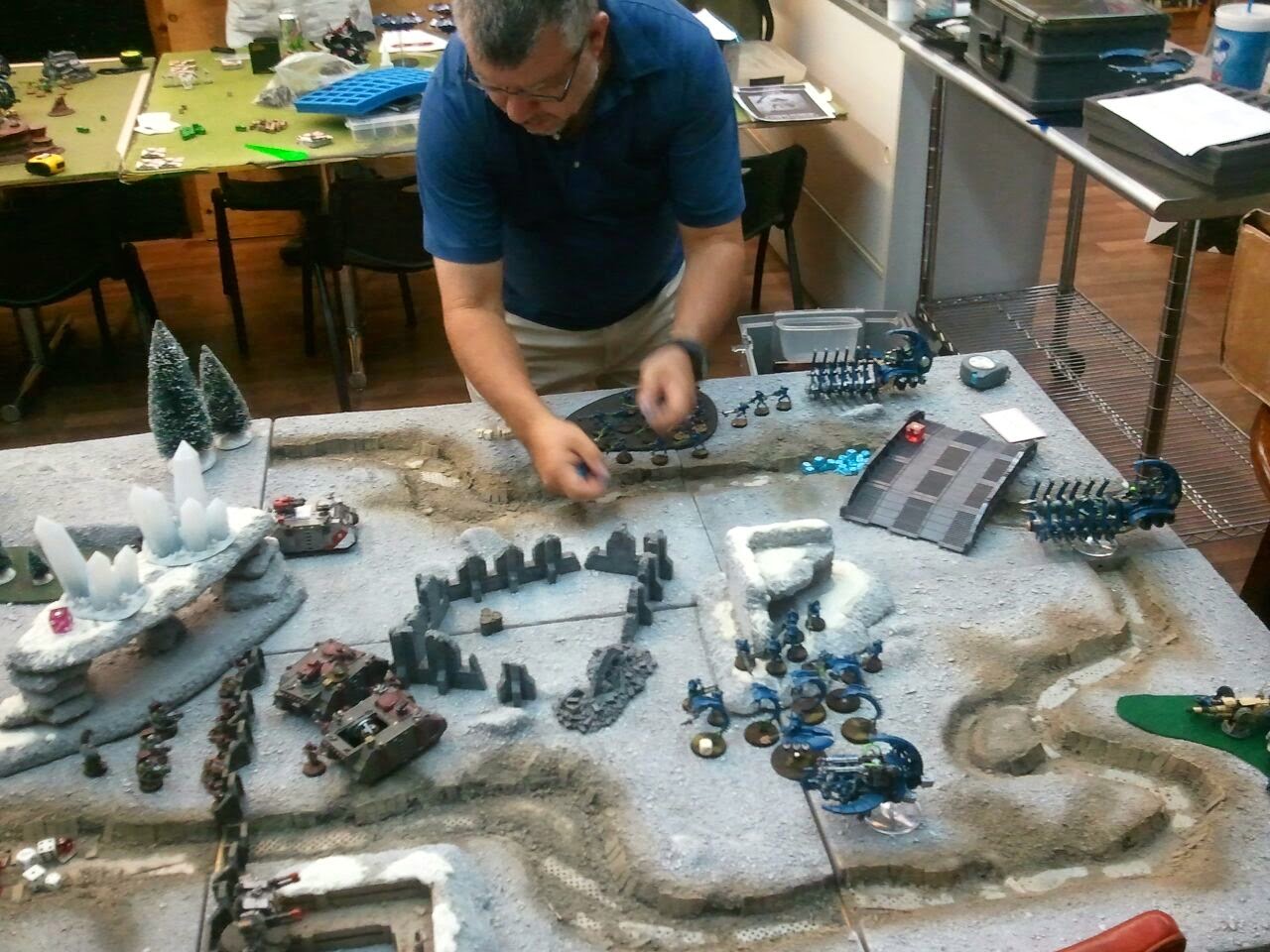 The Necron horde all moved forward except for the Doomsday Ark. His Annihilation Barge destroyed one of my Razorbacks for first blood. His Warriors took shots at a Razorback and managed to glance it once. 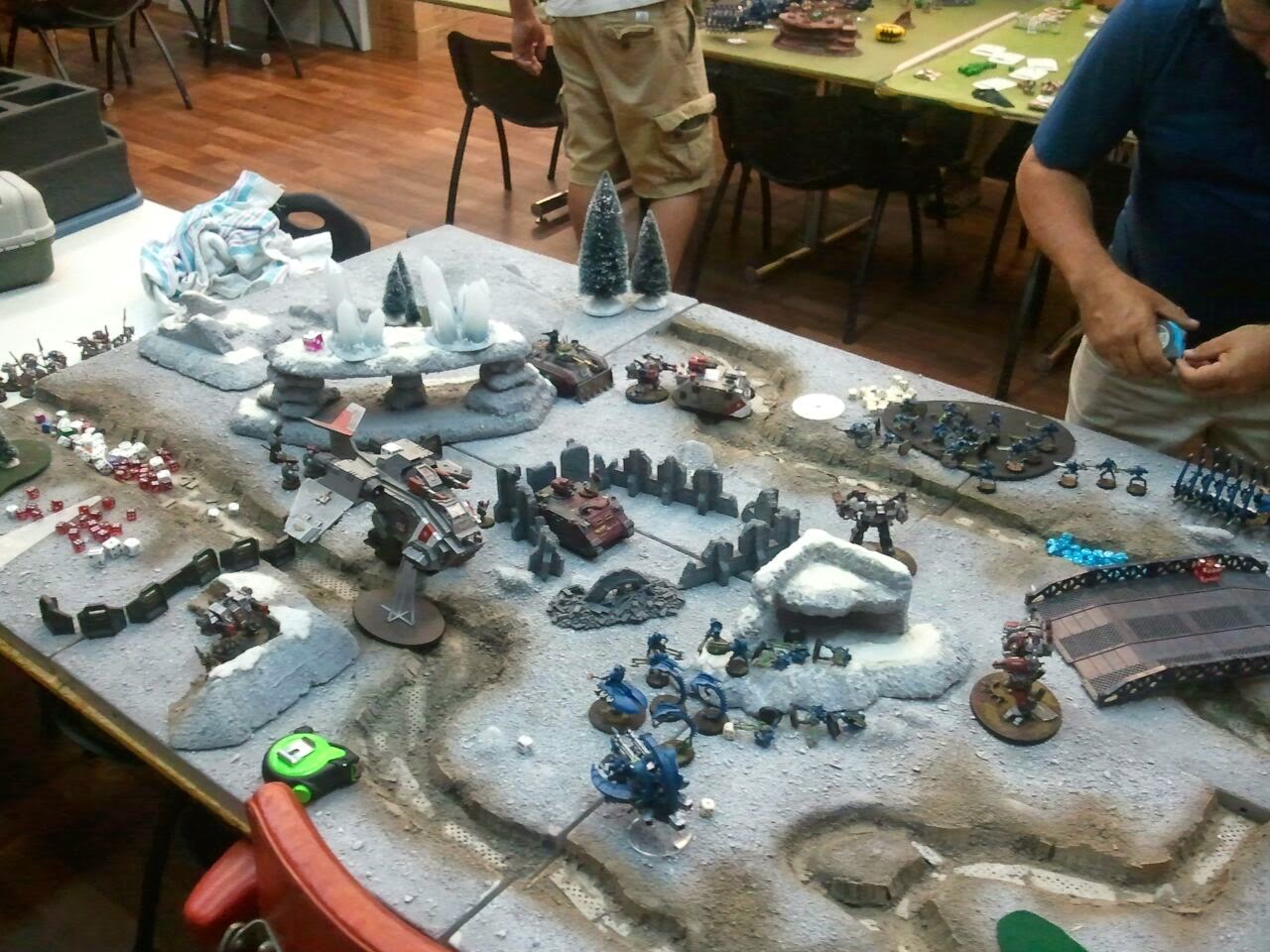 Turn 2: My Storm Raven with Terminators and an Inquisitor, as well as both my Dreadknights, came in from reserve. He fired his Icarus at the Storm Raven and shook it. The Chimera, Dreadnought, and Assault Cannon Razorback pushed forward towards his 20 man Warrior blob. The center Razorback moved into the ruins and the 5 Warrior Acolytes disembarked onto the relic. The psychic phase would see me get Perfect Timing and Prescience off on Coteaz's unit. They shot into the blob of Warriors killing 13. They would fail their moral check and fall back. The Dreadnought and Chimera fired into the Wraiths  doing a few wounds. The second Dreadnought destroyed the Doomsday Ark. The Vindicare and Storm Raven shot at the Annihilation Barge but he passed his jink saves. The Dreadknights both double teamed the Immortals and Wraiths. Sadly, most of the Immortals got up and he passed all his saves on the Wraiths. 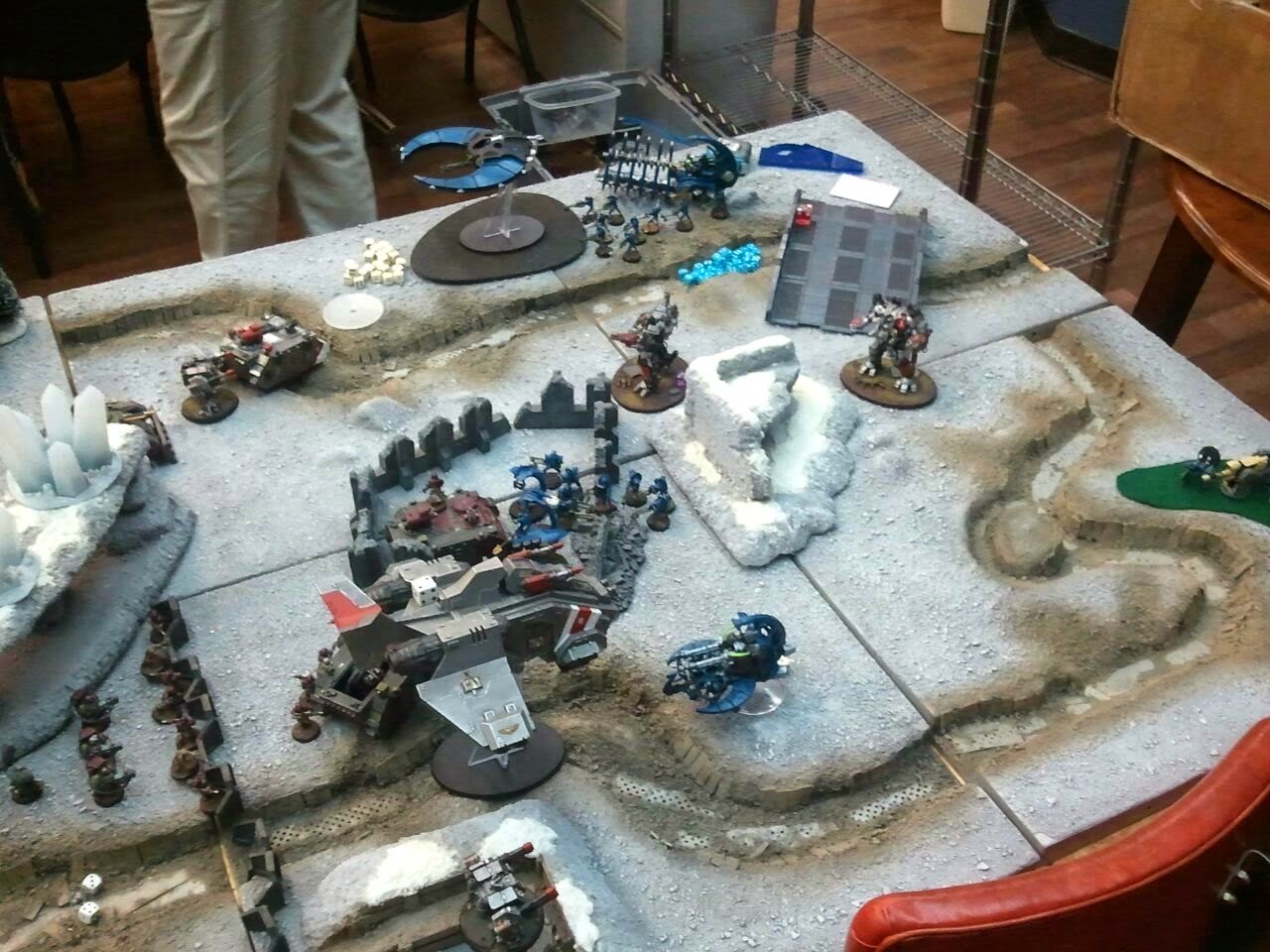 His Doomscythe came in but his Monolith didn't, even though he rolled twice because of his Warlord trait. His Warriors rallied and his Ghost Arc returned 2 Warriors back to the blob giving him 9. His Immortals and Wraiths moved toward the Acolytes with the Relic. His Warriors and Ghost Arc shot at a Dreadknight doing 1 wound. His Doom Scythe shot its beam at the Razorback, Dreadnought, and Chimera. He exploded the Razorback and killed one of the men inside. The Dreadnought and Chimera both made their cover saves. The Tesla shots destroyed one of the Dreadnoughts arms. The Immortals fired at the Strike Squad that was in the Razorback but failed to do anything. The Annihilation Barge fired at the Storm Raven and got it to jink but failed to do anything. The Wraiths and Destroyer Lord assaulted the Razorback and destroyed it. 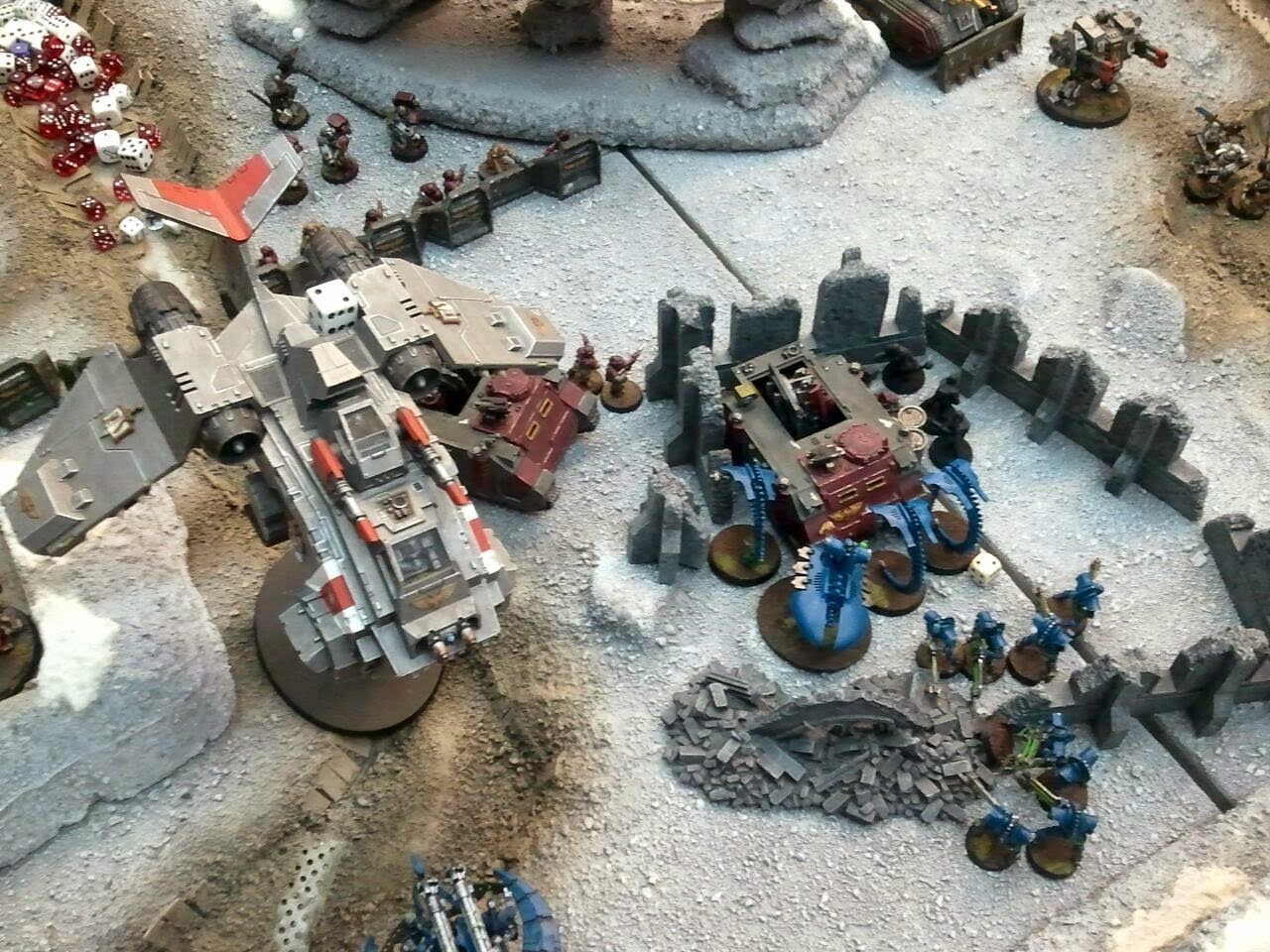 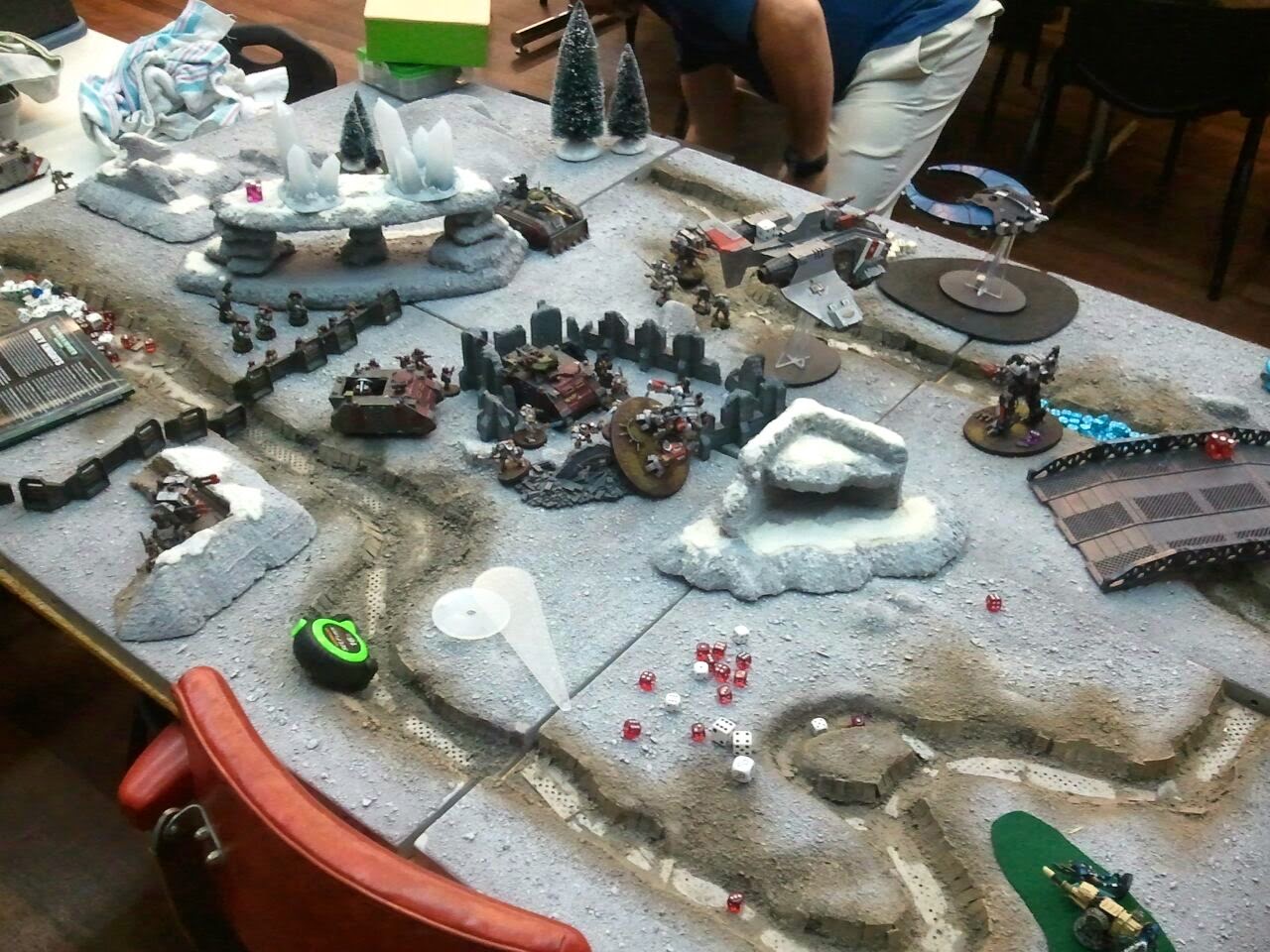 Turn 3: Terminators disembarked from the Storm Raven. The Storm Raven flew into the ruins but was placed outside due to wobbly model syndrome. One Dreadknight moved towards the Immortals and the other went after the Warriors. During the psychic phase the Terminators activated their force weapons and the Ordo Xenos Inquisitor gave them Prescience. Coteaz cast Perfect Timing and Prescience on his unit. Shooting saw the Dreadnoughts kill his Ghost Arc. Coteaz and crew killed the Warriors. The Vindicare shot and killed the Annihilation Barge. The Chimera shot the Wraiths wounding one. The Storm Raven shot at the Doomscythe and failed to do anything. Terminators assaulted and killed the Wraiths. The Dreadknight in the center assaulted and killed the Immortals. This was a devastating turn. He only had 3 units left. One of which was in reserve still. 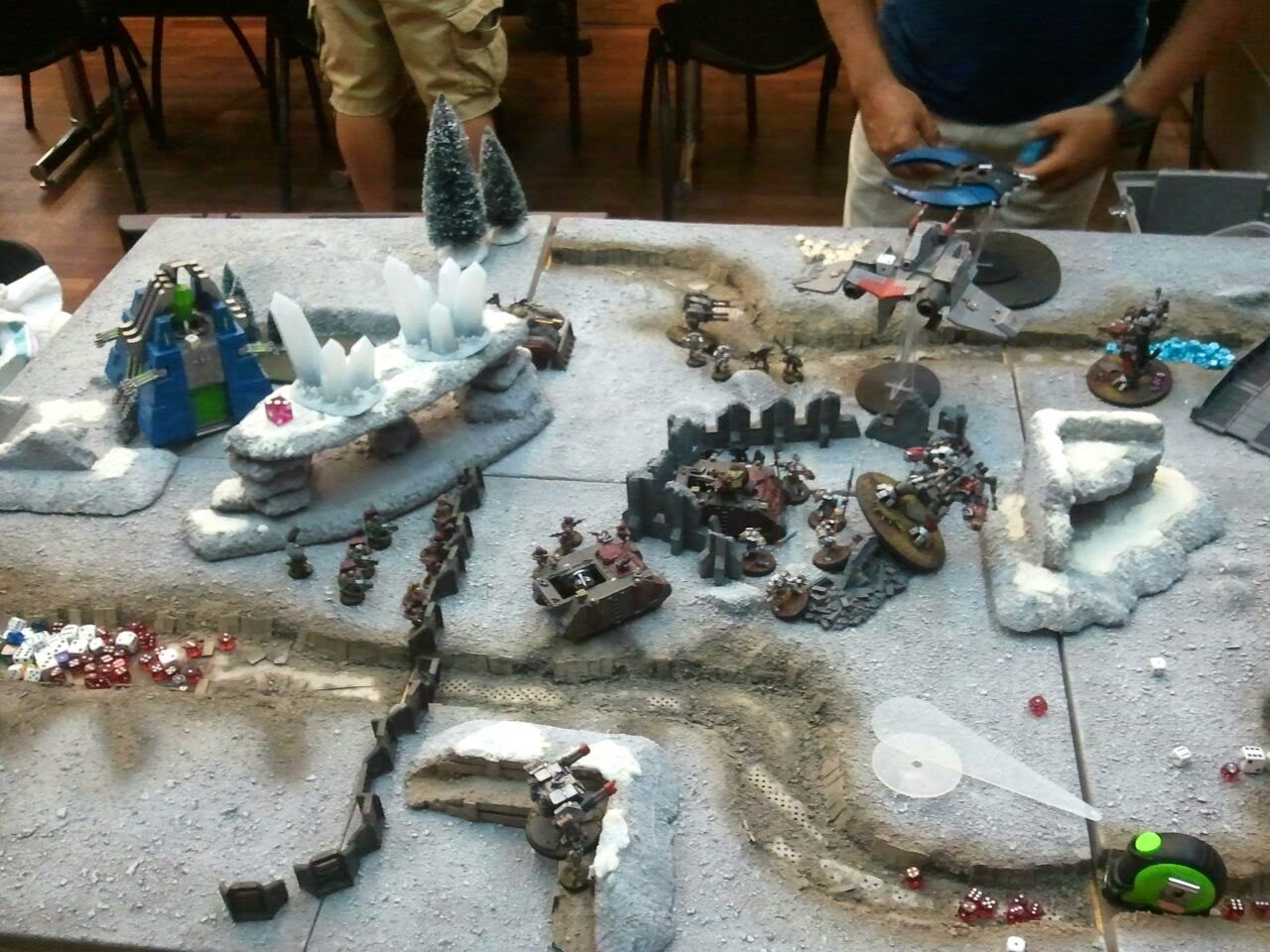 His Monolith came in and landed in my back field. His Doomscythe turned and headed toward Coteaz. He was trying to kill my Warlord of the extra points. If he could shoot me off of the objective by turn 5 he could win. Sadly for him it didn't happen that way. He shot every thing he had into Coteaz but failed to do anything. 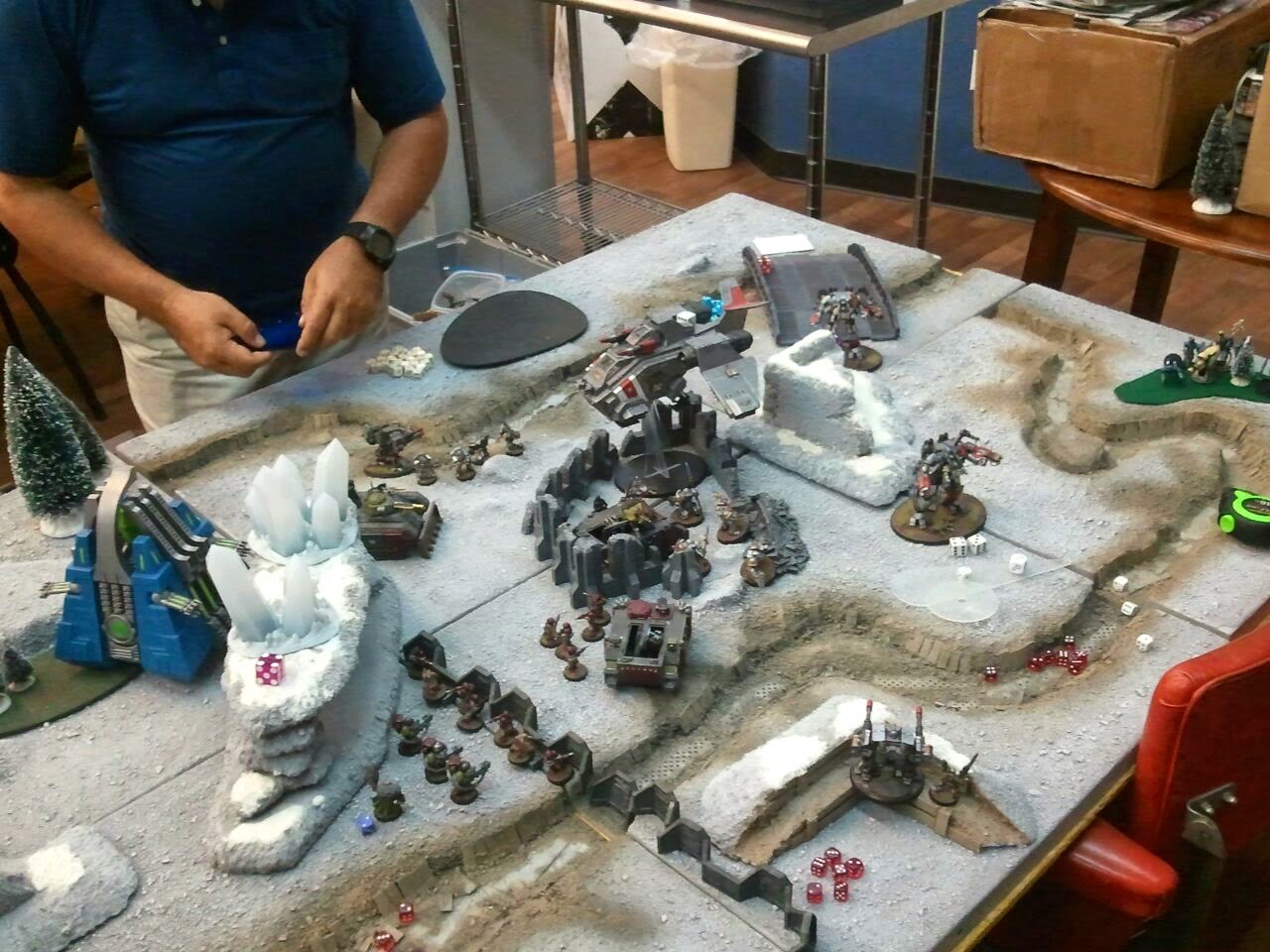 In my turn the Storm Raven dropped his flyer and it was pretty much done. We ended the game 4-2 for the Grey Knights. A fitting way to end their previous codex. 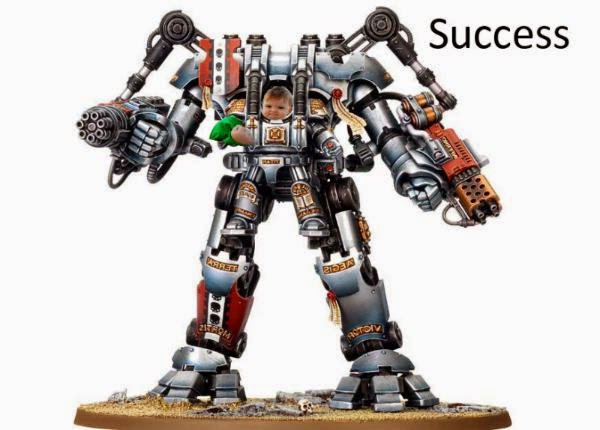