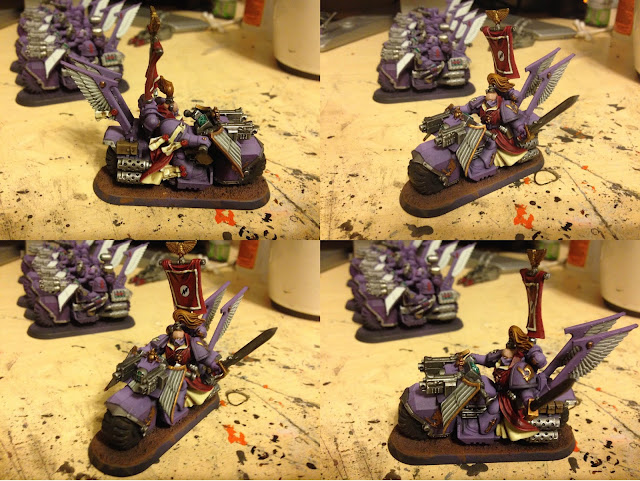 So, I finally decided that White Scars Battle Company will be my Adepticon army. It was a tough choice considering how much I'm going to have to get painted over the next couple months. I had a ton of bikes already but they were all kitted out to be Dark Angels for my Super Friends army. I needed to convert the Apothecary to run with either Plasma Talons or Bolters and I needed to convert a model to use as Kor'Sarro Khan. Above is the result of the Khan conversion. His sword and banner are magnetized so I can use him as a sergeant for my Dark Angels army as well. I will be the first to admit that my Apothecary's gun conversions are not my best work. It's really just magnets glued to the end of the guns. Sadly for now, I have no other solutions. The ends of the guns are just too small to conceal the magnets themselves. Later on down the line I may just glue them until after Adepticon or get some smaller magnets.

I only need 11 of the 20 bikes I own for the list I plan on taking, but I figure if I don't paint them all now, I never will. My goal is to have these finished by the end of the day Sunday. I can't wait to get these guys completed. They are starting to crush my soul a little bit. Then I will move on to the 7 Rhino/Razorbacks and 10 Scouts. I'm giving myself the entire month of February to finish them. Then for March I'll be painting up 40-50 Marines. I was feeling super productive this weekend and got a jump on both of those. I got the purple airbrush work done on most of the vehicles and the Marines. GO ME!!!