Well, it was that time of year again. The Fantasy Shop in St. Charles, MO hosted their annual Toys For Tots tournament this past weekend. I always love going to this tournament every year. It supports a great cause and you get to have a day of fun. The weather was a bit dicey but I wasn't going to let that stop me from playing. I hadn't played a game of 40k since October when my son was born. That's also the reason posts from me have been slow. Sleep is a hot commodity around the house so I devote a lot of free time to that now. 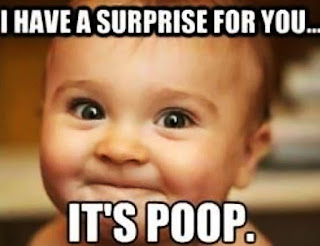 It was 1500 point ITC tournament. Three 2 hour and 15 minute rounds. After an entire year of playing nothing but my Space Marine Battle Company, I was ready to mix it up and play something different. So, I busted out the Imperial Knights. Here's the list: 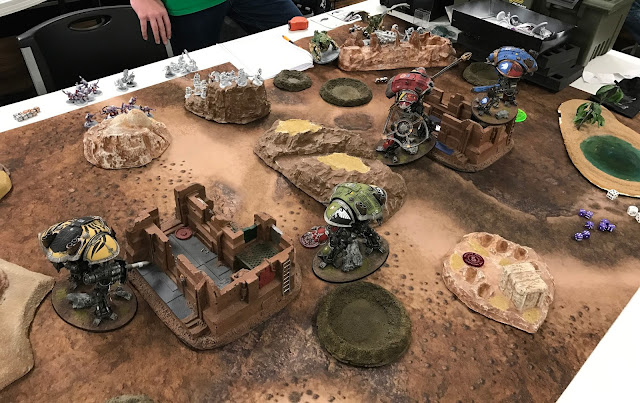 Round 1 saw the Knights pitted against Tyranids/Genestealer Cult.  The missions were Emperor's Will and Maelstrom Objectives. I was not prepared for the Genestealer Cult shenanigans but the raw power of the Imperial Knights was too much for them to handle. Though I lost 2 Knights in the battle, I still won the game 9 to 1. 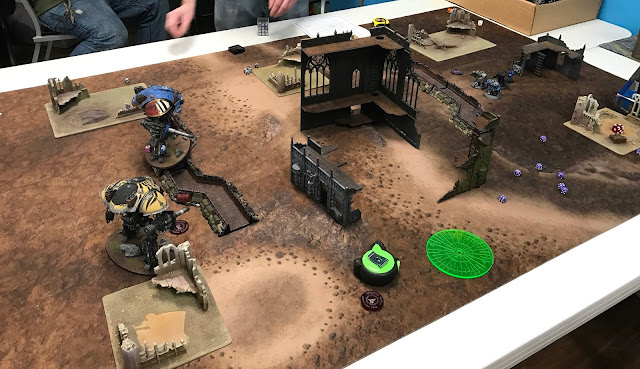 In round 2 I faced off against Grey Knights/Space Marine Grav Centurions in a pod. It was Purge the Alien and Maelstrom Objectives. I didn't think I would win this game but my opponent played a little bit too conservatively overall. He also managed to kill 2 of my Knights, but by that time the only thing he had left on the board was his Centurions. All I had to do was keep my Knights out of his 30" threat range to win the game. Final score was 10 to 1. 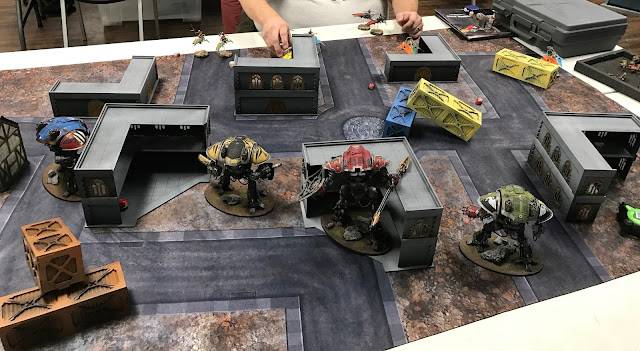 Round 3 was a showdown against Harlequins. The missions were Big Guns Never Tire and Maelstrom Objectives. Man was this an awesome game! Here's a quick turn by turn summary that my opponent posted on GameMidwest.com:

"Both Shadow Seers got Fog of dreams which saved my butt. One thing to point out is that my shooting was next to ineffective the entire game. Haywire grenades were the only ranged weapons that really did anything.

Turn 1
Adam got first turn and killed a Void Weaver(with a 3+ re-rollable Jink save), a Star Weaver, and 3 of the 5 troupe that were inside. Knights caused a bike unit and another Star Weaver unit to Jink but didn't destroy or kill anything else. I was well hidden and Adam couldn't get a lot of shots off.

I came out of hiding and got Fog of Dreams off on one of the Dual Battle Cannon Knights. Both the remaining Star weavers moved 12” then Turbo Boosted to get right up in the Knight's faces. Adam had no flamers so I was lucky there. One bike unit turbo boosted behind him. I knew Adam would have to deal with them and pull 1 Knight away from the group. Divide and Conquer!

Turn 2
Adam blows up both star weavers but I got lucky and only lost 4 harlequins between the 2 units. One unit only lost 1 model. The bikes I threw to the back were wiped out. Oh well. Adam charged 1 of the units and killed them but they put 3 HP on him before going down.

Shooting did nothing but I got Fog of Dreams off on his Warlord. The other one I casted with 4 dice and got 4 ones. I blitzed the Solitaire (SO should have saved that for turn 4) and the 2 Harlequins from the first blown up Star Weaver into the Knight Gallant that can throw vehicles. It was the same one that only had 3 HP left, and they killed him. His explosion scattered off the board. The 4 Man Troupe unit failed a charge on the Warlord.

Turn 3
Adam's shooting was ineffective here as one of the Knights was across the board dealing with the bikes. One Dual battle cannon shot at the Death Jester but with a 2+ cover he was good. Adam ran his Warlord. A Knight Paladin attempted to charge a Void Weaver but failed a 4 inch charge.

I got Fog of Dreams off on 1 knight (Adam was cursing that power and the Solitare at this point jokingly). The 4 man Troupe and the Solitaire charged his warlord and killed him. A Death Jester and a Shadow Seer both charged a Knight Paladin and between throwing the grenades and close combat, caused 3 wounds. He had a Void Weaver just behind him and was more scared of that, so he put his shield in the rear. The knight whiffed his attacks but then stomped the Shadow Seer. They were too far apart for him to get both and only rolled 1 Stomp. The Death Jester held the one knight in close combat to keep him from shooting. Another Shadow Seer had to fall back to my table half to take an objective.

Turn 4
Adam finished off the Death Jester in close combat and the other Knight killed the 2 man Troupe that was holding an objective near the back.

The Solitaire and his new unit that he was moving with(He couldn't join them because he's not an Independent Character), then charged another Knight Paladin and put 4 wounds on it. He hits the Solitaire 3 times but the Solitaire saves them all. Adam rolled poorly for stomps only killing one of the Harlquins. He was mostly concentrating on trying to kill the Solitare. The Death Jester and Shadow Seer attempt to finish the other one off and got it down to 1 HP. The Death Jester failed his charge and the Shadow Seer was killed in close combat after failing to take the last hull point.

Turn 5
The one mobile Knight Paladin moves onto one of my Big Guns objectives and shoots the bikes hiding in the back taking one of his Big Guns objectives. No wounds caused but he kills the Death Jester with Heavy Stubber fire. The Solitaire and unit kill off the other Knight Paladin in close combat but the explosion kills the Solitaire and 2 of the troupe. Only thing left standing is the troupe master.

Troupe master moves 6”, runs 6”, Then makes a 9” inch charge on the Last Knight. I only need to roll a single 6 on 5 Dice but I fail and get cut down in combat.

The game ends with 1 Knight with 1 HP and a unhurt squad of bikes.

Primary = He wins 4 Points
Maelstrom = I win 4 Points
Adam Got Slay the warlord
I got Slay the Warlord.

Best Game I ever Played it was fun as heck. The Solitaire was truly my MVP of the Day."

Here's few pics I took of some of the other tables: 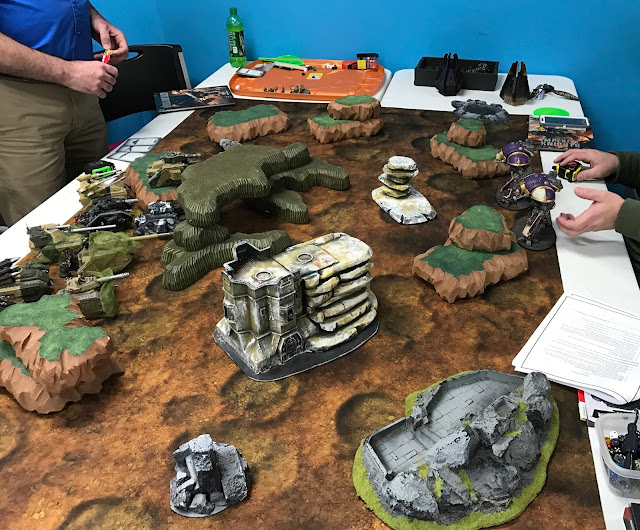 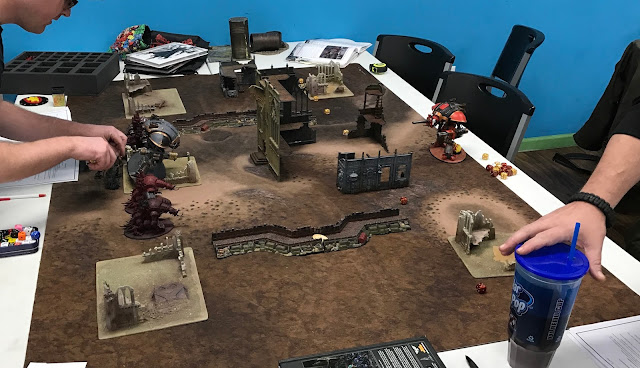 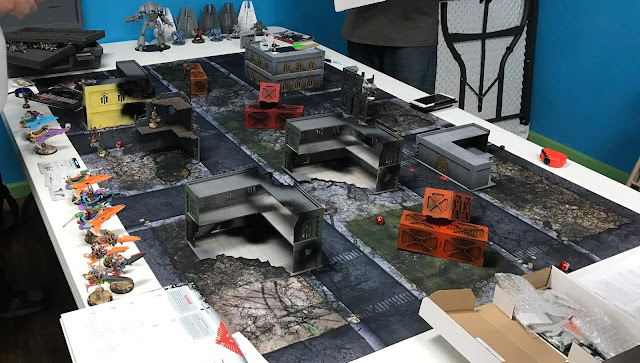 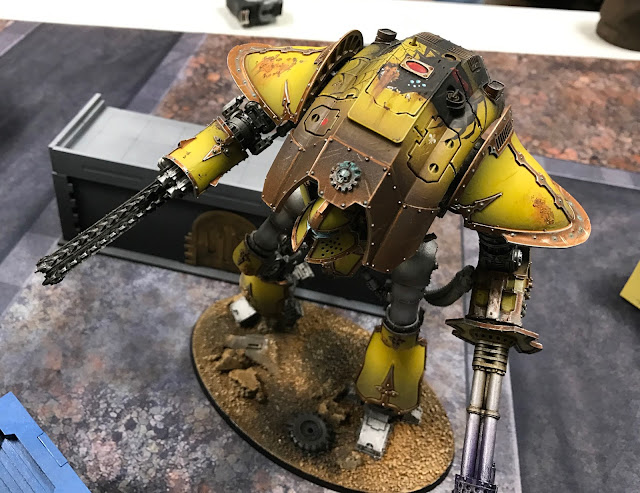 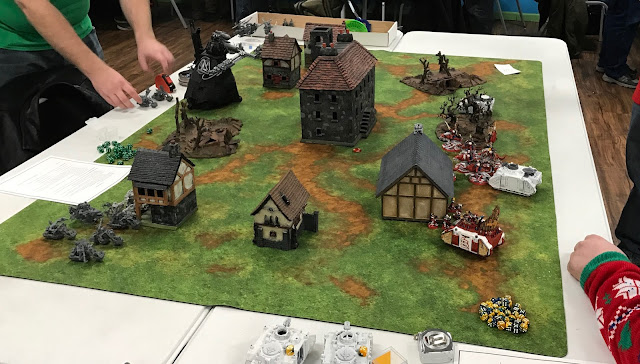 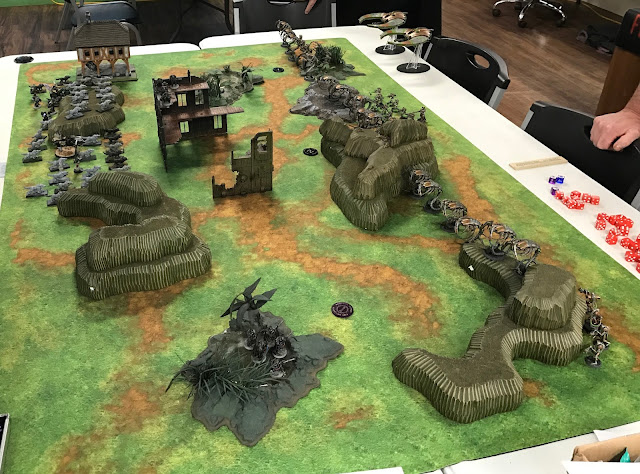