Adepticon and the 2016 Warhammer Championships 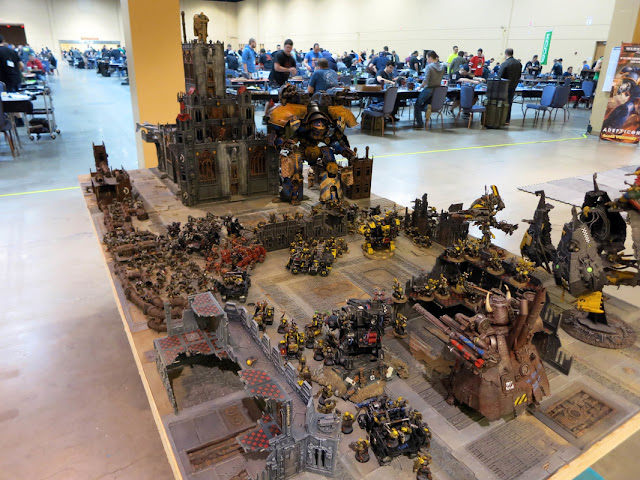 My first Adepticon is in the bag. It was a fantastic experience and I can't wait to do it again. Between the Lonely Havocs and the Gateway Gamers, our area group managed to take home a few awards and earn some top ranks.

Gateway Gamers team of Avery Windau, Jeff Berdar, Doug James, and Mike Horner took a 10th place finish overall in the Team Tournament as well as one of them winning a top player award in the Badab War Narrative Campaign. Congrats to the Gateway Gamers! 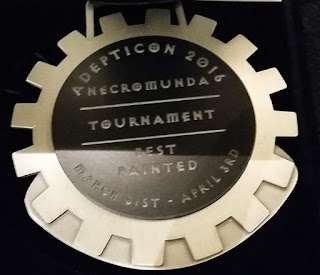 As for me and the 40k Championship, here's the recap: 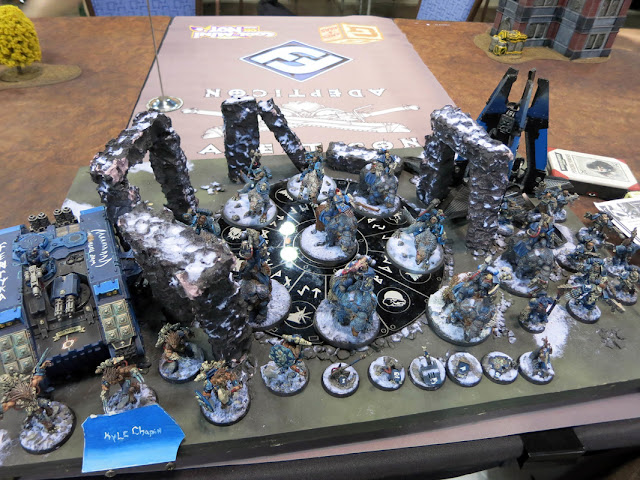 Deployment: Vanguard
Mission 1: King of the Hill (Cumulative Points by being within 12" of the center of the table)
Mission 2: Emperor's Will

Werewolves and dudes riding bears. Scary stuff. He won all the rolls, chose his side, and decided to deploy and go first. He was using the Deathpack formation from the new Start Collecting Space Wolves box. It basically allowed any unit within 12" of his Wolf Lord to run and charge. Which essentially set him up for a turn one charge with fleet. I deployed back to what I thought would put him just out of range. Turn one he dropped his pod right on my front line and blew up an empty Razorback giving him first blood. His 3 units of Thunder Bears all moved up along with the Landraider containing Wulfen. Unfortunately for me, he rolled really well for his run rolls and was in range for charges with his HQ unit and the Wulfen. As luck would have it, he failed both fleet charges needing something like 9" for both. 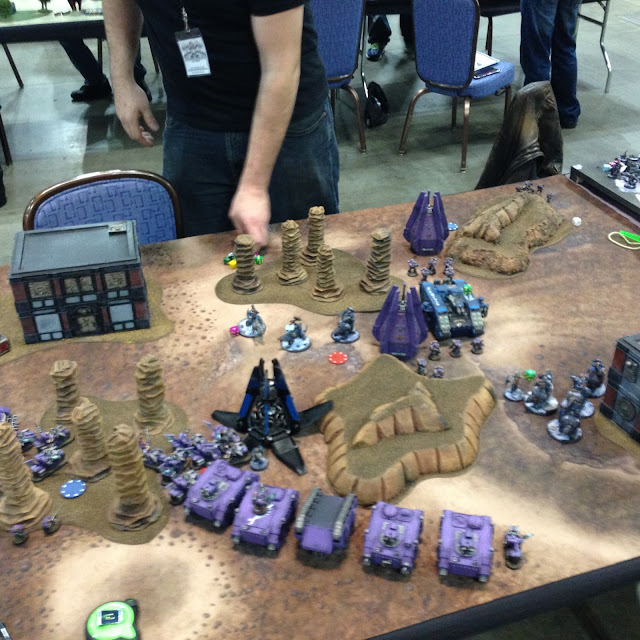 My two pods both came in and did work. My command squad with 5 meltas took out all but 1 of the Wulfen and my Tactical squad immobilized and stunned the Landraider taking it down to 2 hull points. My bike Command Squad charged his Grey Hunters killing all but one. Shots from Devastators, Razorbacks, and Bikes would kill one of his Thunder Bear squads. He had broken a Rune Priest off of his HQ unit to take out some Scouts I had infiltrated behind his army. He clearly didn't get the memo that Scouts are the shit. They would take him down in a hail of gunfire.

In his turn 2 he would fail a 4" fleet charge with his HQ unit and the last of the Wulfen died on overwatch. After that it was really just a clean up game for me. I ended up table him on turn 4 getting a full 30 points. 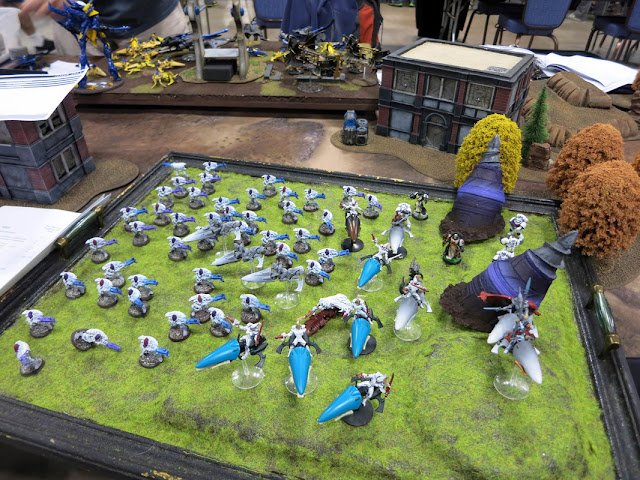 My second opponent of the day brought something very similar to the list that won the Las Vegas Open in February. 45 Warp Spiders with scatter bike support. The one notable difference was the lack of a Wraithknight. I won the roll to choose sides and he won the roll to choose who deployed and went first. He chose to have me go first. I set up and he decided to null deploy. The game started and I moved half of my force onto his objective and half onto mine. During his first turn he dropped his pod onto my objective with a Tactical Squad and Librarian. Their shooting killed 1 bike. Turn 2 hit and I jumped up 5 points for being on both objectives. I wiped out the pod, Tactical Marines, and the Librarian netting me 6 more points. His turn 2, all except three of his Warp Spider squads came on. He managed to take out some bikes and some Razorbacks this turn. We would go on trading units back and forth heavily for the rest of the game. 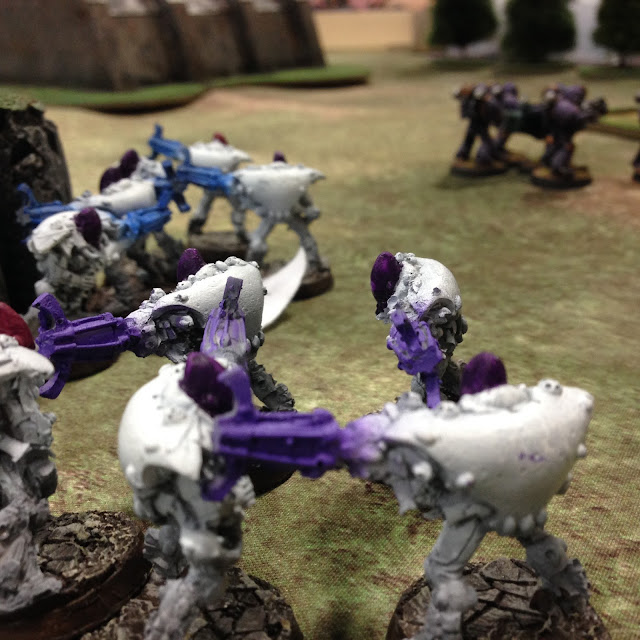 Sadly for him, only a hand full of his units were objective secured while nearly all of mine were. I was smart enough to target those units first and wipe them off the board. This meant that I was usually scoring 6 points a turn on objectives alone since he couldn't contest them. While he got a ton of kill points I managed to do the same. In the end I also won this game with a perfect 30 points. 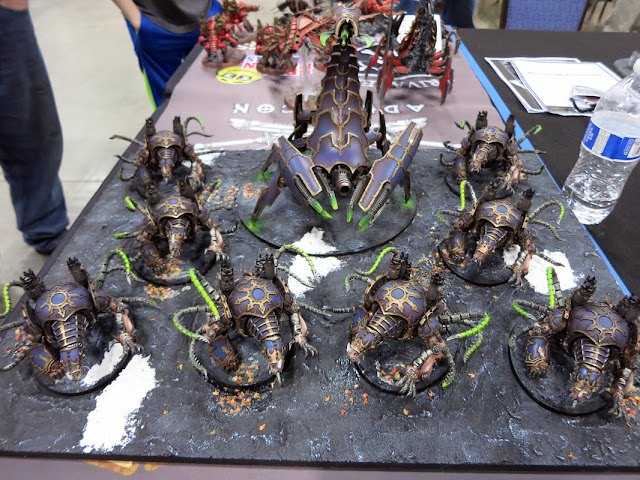 Let me just start by saying Kelsey Haley is an awesome guy. We started the game with him pouring us a couple shots of some pretty stellar scotch and it wasn't the last one we had. Kelsey was running 8 Maulerfiends and a Brass Scorpion in the Hellforged Hunting Pack formation. Good times. I felt like I had met Kelsey before. It wasn't until the end of the game when I realized that I've watched Kelsey in a few battle reports on the Long War Youtube channel. 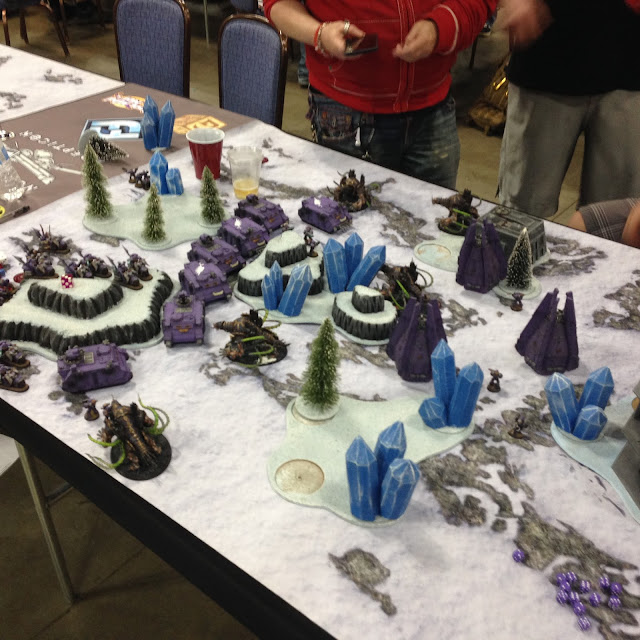 In his turn 2 he assaulted with all of his Maulerfiends. One of them blew up to a lucky melta gun overwatch. I think another would get immobilized by a grav-gun on the charge. Lucky stuff for me. The others all made their targets. If I recall correctly, he destroyed a Rhino, Razorback, a unit of Scouts, and Tactical Squad. One tactical squad survived an assault and hit and ran out. In my turn I either immobilized or blew up all but 2 of his Maulerfiends. Knowing that he couldn't pull out a win with only 2, he conceded the game. Another perfect score of 30.

At this point I'm thinking, "Holy shit! I may actually make top 16 at my first Adepticon." 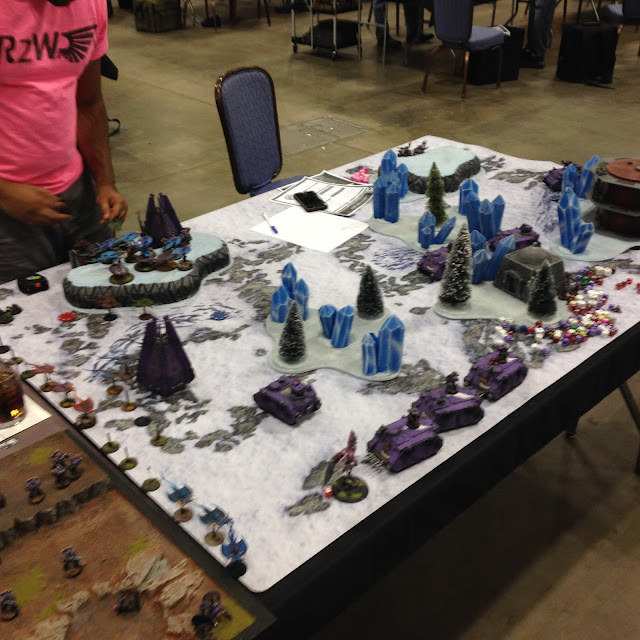 Deployment: Dawn of War
Mission 1: Cumulative Objectives (Each objective was worth 2 points if you were on it at the start of your turn, starting round 2.)
Mission 2: Crusade

Nick was running a Daemons CAD and the Burning Skyhost from the War Zone Fenris book. It consisted of 9 units of Screamers and 1 Herald on a Disc. From what I can remember, his CAD had Fateweaver, Nurglings, and 2 Heralds on Discs. I'm fairly certain there were a couple other units as well but at the moment I can't recall. He also had an Imperial Bunker with a Comms Relay. His Screamer star was pretty standard. Grimoire, Invis, unkillable, etc. I won the roll to choose sides and Nick won the roll to deploy first and choose who went first. We both placed objectives in a small triangle in the opposite corners of our deployment zones. He castled up in the corner with all of his objectives. He surround his Heralds to ensure I wouldn't be able to kill any. I deployed half of my army on my objectives and the other half directly across from him. I reserved all of my bikes including my command squad. I chose not to scout because I felt that it would just be feeding him units. Screamers poo on light transports in assault. He ended up giving me first turn and the game started.

It was night fight so he was jinking for 3+'s re-rolling 1's which is tough to kill, especially on 2 wound models. I would have had to eat through 8 Screamers before getting to the Heralds. I decided that I would just ignore that unit and make an attempt at killing Fateweaver. Both pods came in contesting 2 of his objectives. I poured every shot I could get in to Fateweaver. Sadly, I couldn't finish him off and left him alive with 2 wounds. I also killed 1 Screamer and 2 Nurglings. Having brought a ton of Grav weaponry to counter Eldar, really backfired on me in this round. They only wounded on 6's since daemons have no armor saves. Sad times. In his turn one he took half of the Screamers and lined them up down the entire left side of the board. If my outflank reserves came in on that side they would die immediately from the inability to come on 1" away from any of his models. I definitely didn't see that one coming. It was a fantastic play. Fateweaver flew forward killing a marine with vector strike. His Screamer star powered up and became unkillable. He used it to multi-assault a drop pod and a unit of Tactical Marines killing both.

At the start of turn two I grabbed 6 points for holding 3 objectives. I attempted to drop another pod on one of his objectives but scattered off. The 2 units of the bikes came in. One would die to his screamer wall and the other came in on the opposite edge. Shooting would see me drop another wound from Fateweaver and kill a couple Screamers. Fateweaver attempted to kill some Rhinos with psyker powers and failed. His turn 2 he grabbed 2 points for objectives. He attempted to deep strike in a unit of Nurglings, misshaped, rolled a 1, and lost them to the warp. He attempted to bring in the second unit in the same place and misshaped again. This time I got to place them and I put them in his back corner where he deployed. He assaulted and killed both pods as well as a unit of Tactical Marines.

Turn 3 I grabbed another 6 points. My Bike Command Squad and HQ's came in on my side of the board avoiding the Screamer wall. I killed a few screamers and tried to kill Fatewaver but the slippery bastard refused to die. He grabbed 6 points for objectives at the start of his turn. Fateweaver flew off the board. The Screamer star summoned more Screamers. Now that all of my units were on the board the Screamer wall decided to join the game. The screamers all made a bum rush towards my transports. He managed to surround 2 in assaults this turn killing them and the guys inside since they couldn't disembark while the vehicle was surrounded.

The next two turns were pretty much the exact same thing. I new after turn 3 that my only chance of winning was for the game to end on turn 5. At that point I held 2 objectives and he held 4. Had the game ended It would have been almost a tie. Sadly, it didn't go down that way. Turn 6 happened and it was the nail in the coffin. Screamers finally munched up all of the units I had on any objectives. Crusade objectives were worth 5 points at the end of the game and having all six shot him up 30 points. In the end I got 0 points and he got the perfect 30.

I finished 28th/190ish players which put me in the top 15%. Not bad for one of the biggest grand tournaments in the country and my first large scale event. The only thing that stopped me from making it to the top was getting paired with Nick for my 4th and final game of the day. Nick Nanavati has won Adepticon 3 years and been in the top 10 for the past 6. He was an incredibly difficult opponent and great to play against. It was a great game. I'll chalk that up as a win in my book.