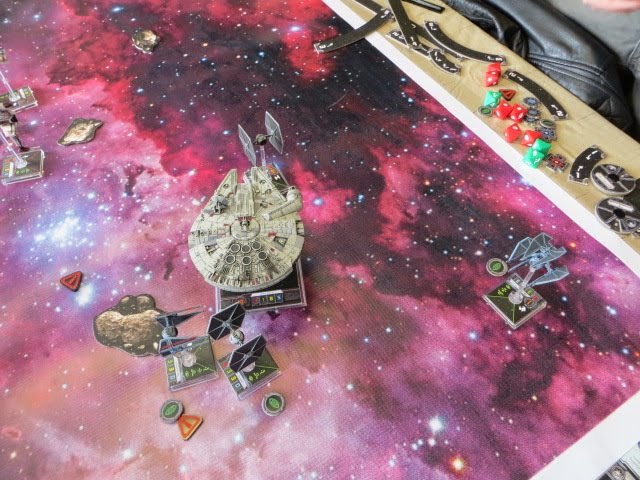 X-wing season has a tight grip on my soul right now. I took part in the league at my FLGS and went on to play in two store championship tournaments in the area. One at Fantasy Books and Games and one at Realms of Gaming in Troy.  I had no idea Realms of Gaming even existed until a few friends from the league said they were going to play in the store tournament there. Discovering this store was pretty huge for me. Turns out its only 15 minutes from where I live. While the store doesn't do Warhammer, they do play X-wing every Thursday. It's always nice to have more gaming options since having a family can sometimes change the nights I have open for gaming.

It had been a long time since I played X-wing. The last time was back in July when the X-wing league first started at Fantasy Books and Games. I decided I would pick up where I left off and run the list I was using back then with some minor tweaks.

I absolutely love this list. I know there's a lot of hate out there for the HWK-290 and thats partially why I wanted to keep the ship in my list. Everyone seems to think the ship is underpowered and awkward but the synergy between Garven and Roark is fantastic. If for some reason Roark can't Focus during his turn, Garven can still get a token to him. This is very important since Roark can't fire his blaster turret without at least 1 focus token. I also figured I'd be facing a ton of the new Tie Phantoms and would need Roark's ability to get shots on them before they re-cloaked. I went 3-1 in the league and figured that this would be my list for the store Tournaments. Surely no one would suspect the awesomeness that is the HWK-290. For my participation and placement in the league I got a Tie Bomber pilot alternate art card, a Han Solo alternate art card, and an acrylic Cloaking token for Tie Phantoms.

Game summaries after the jump.

I don't remember his exact build but I do know that I made pretty quick work of it. 1-0 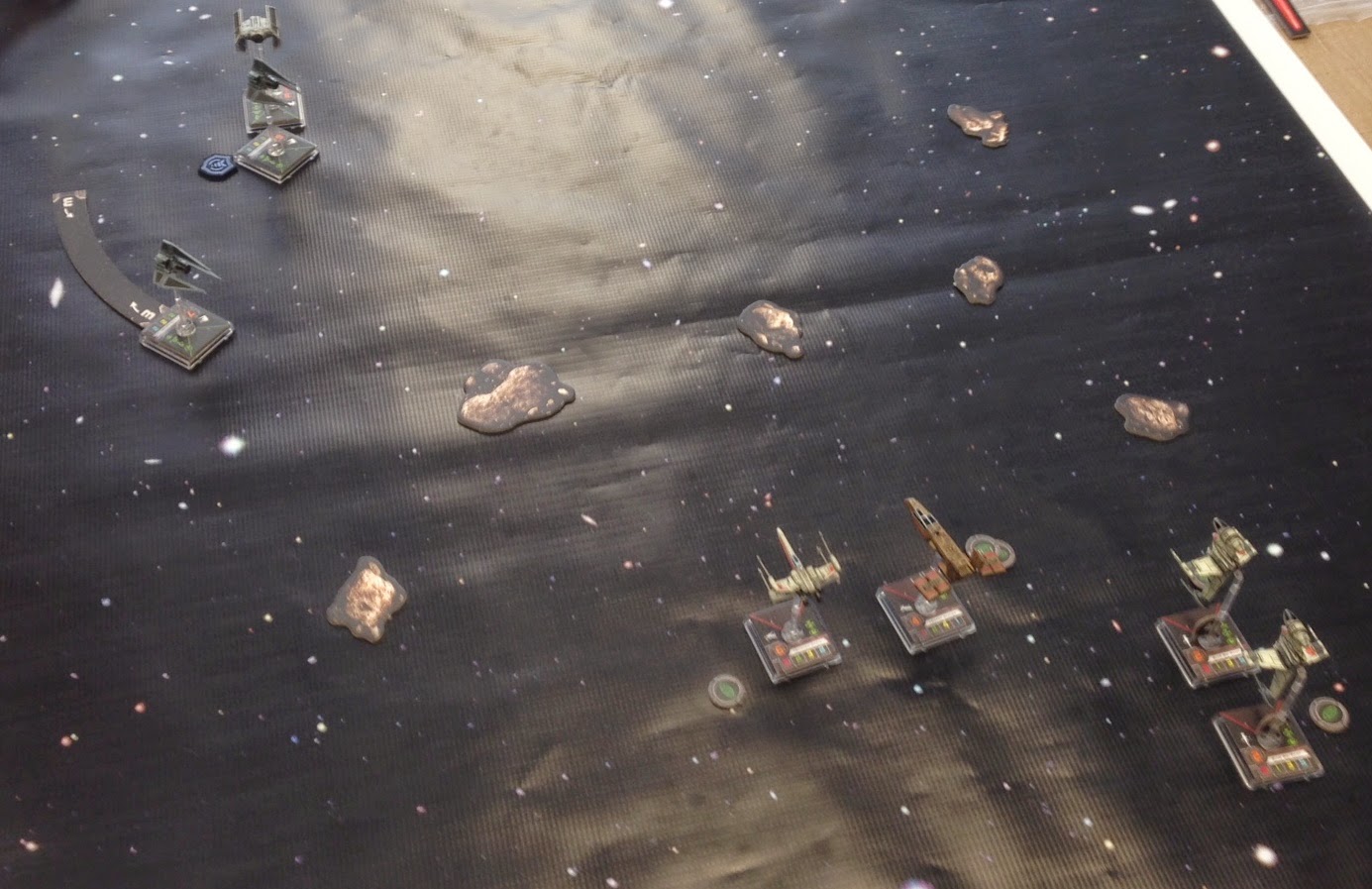 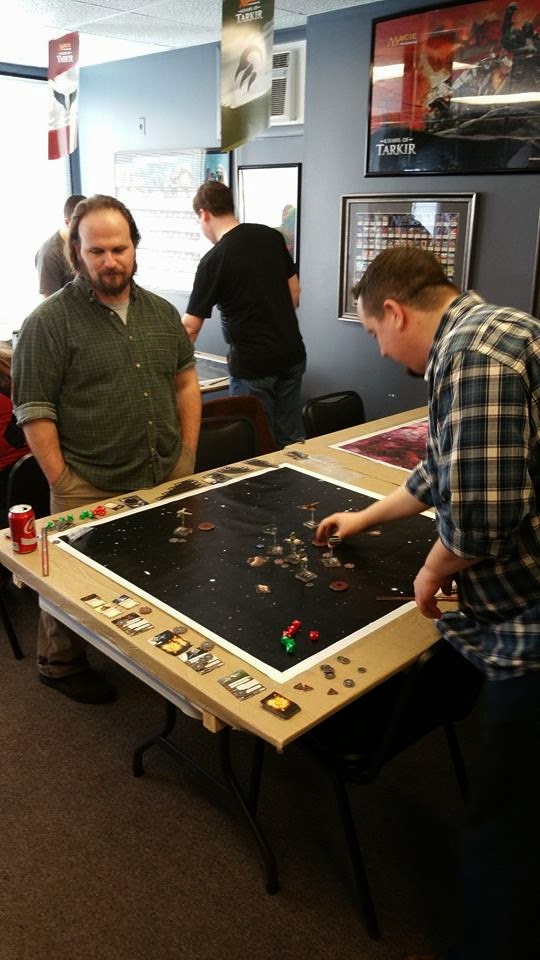 Roark was the star here again boosting my pilots to skill 12 to take out his phantoms. 2-0 You wanna talk about control. This list had it. There was nothing I could do. He would Ion a ship with a Y-wing and cause it to take a Stress token with the Tactician. He had me running into astroids left and right. This list just tore me apart. 2-1 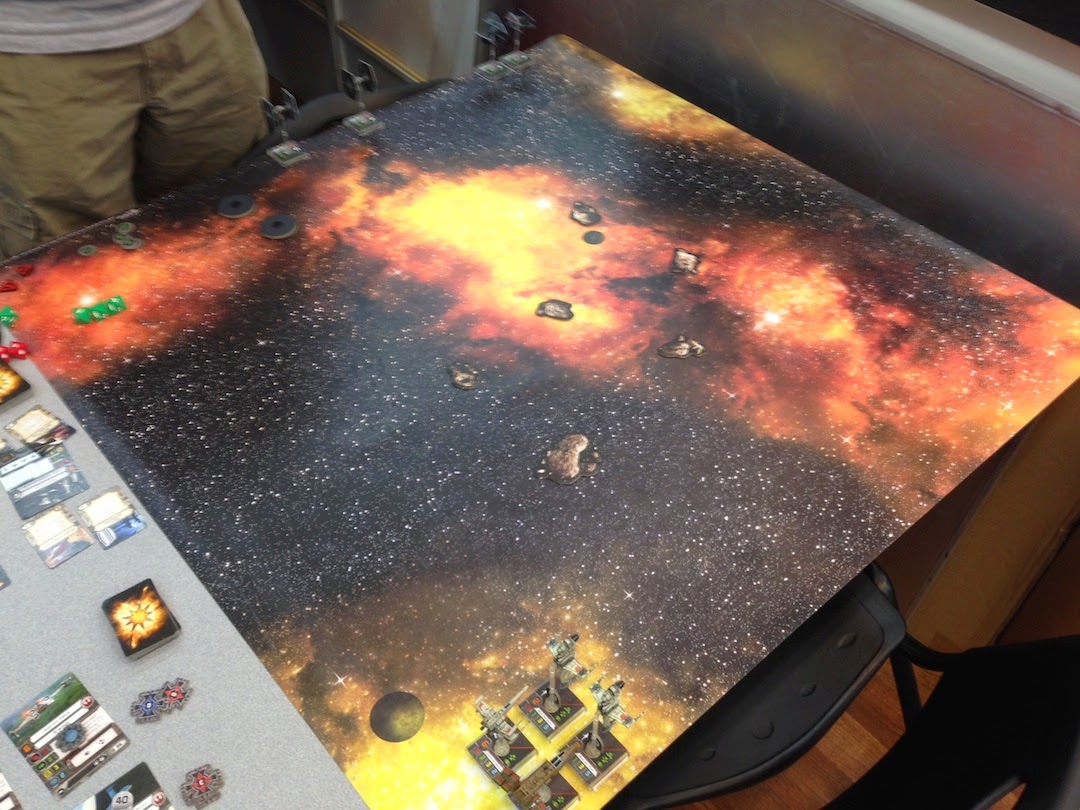 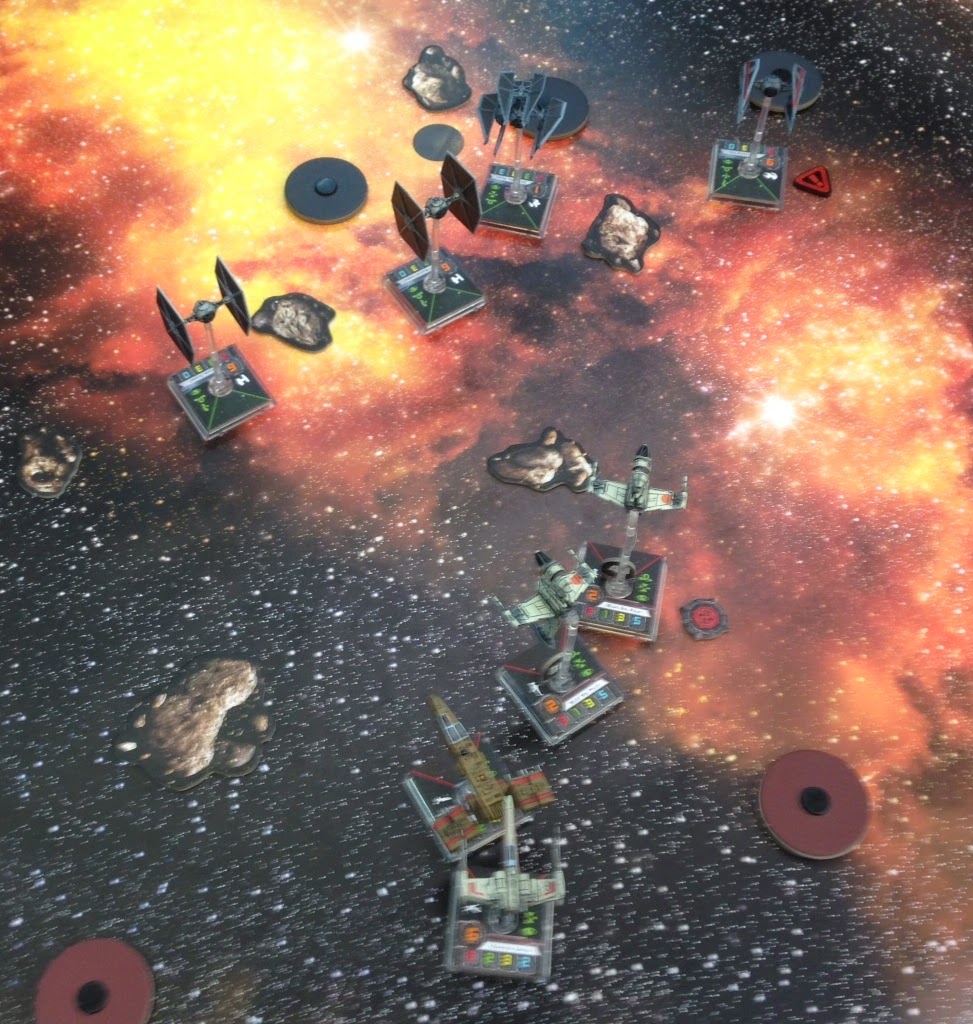 This game was against a familiar opponent and while we usually have great/close games against each other, this time that was not the case. His dice failed him early and his poor piloting had him all over the asteroids. From there it was like he was in quicksand. This win put me at 3-1 and would place me in the top 4. 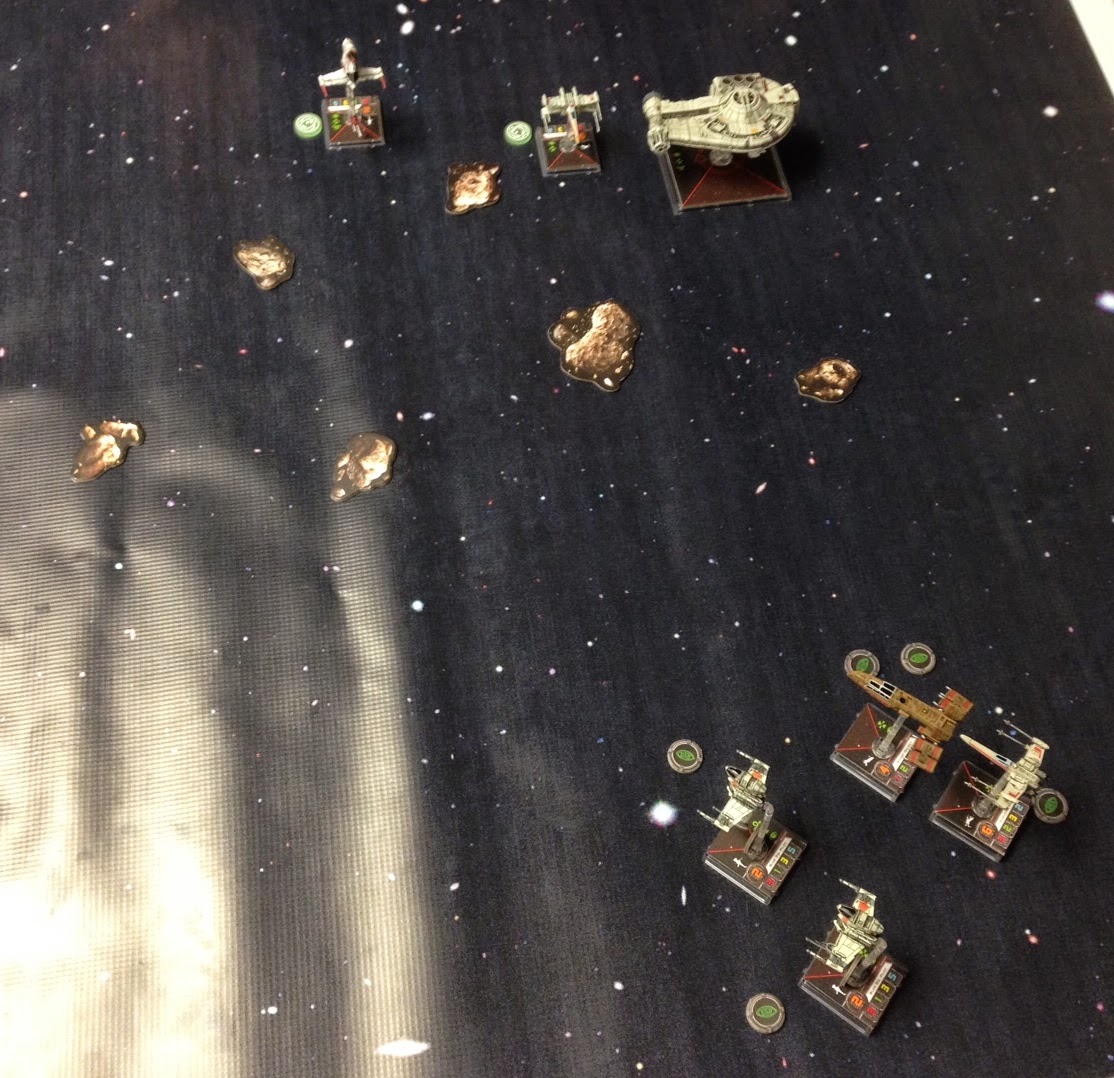 The winner of this game would go to the top table to play for First Place and a single round bye at the Regional Championship of their choice which run from May-July. Sadly for me I got smoked off the table. Dash with a Heavy Laser Cannon is serious business. My opponent would go on to win the Championship. He was a great player and deserved his prize. I didn't walk away empty handed though. For making the top 4 I got a limited edition dice bag and acrylic focus tokens! 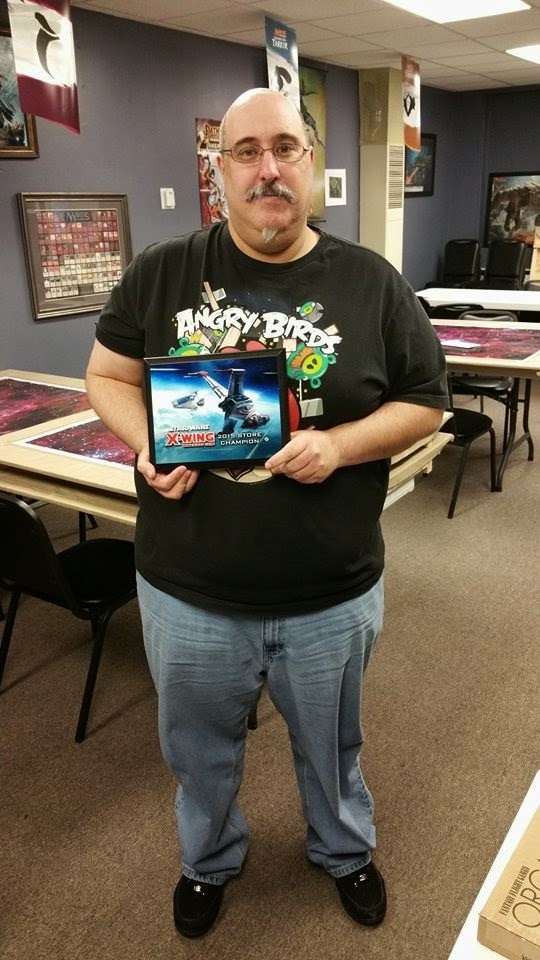 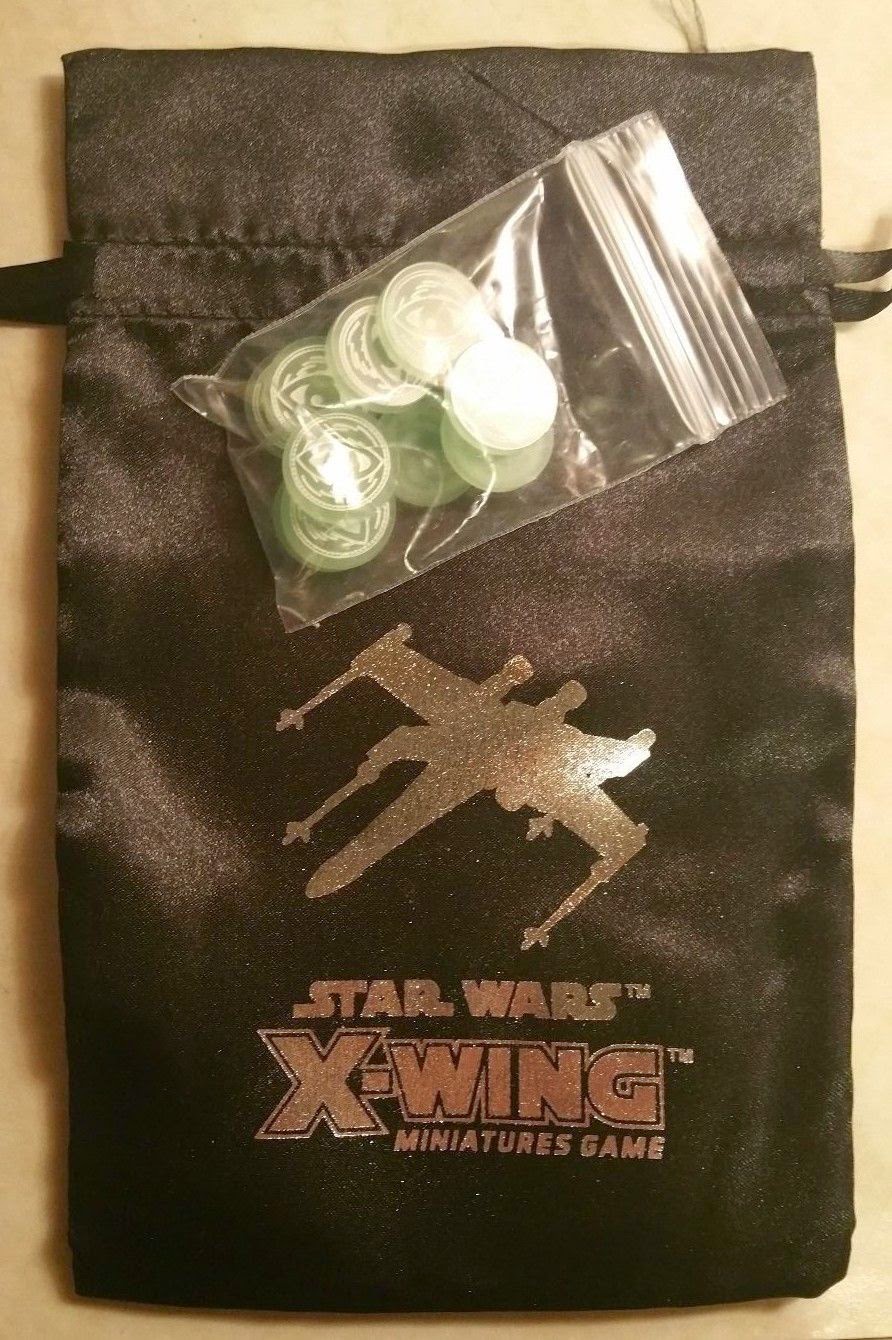 By this time the Wave 6 Scum and Villainy faction had been released and it seemed like everyone was running it. Everyone but me. My SnV ships were due to be delivered that day so I wasn't able to try it. I was pretty worried about having to face all the new ships and pilots without having played against them before. 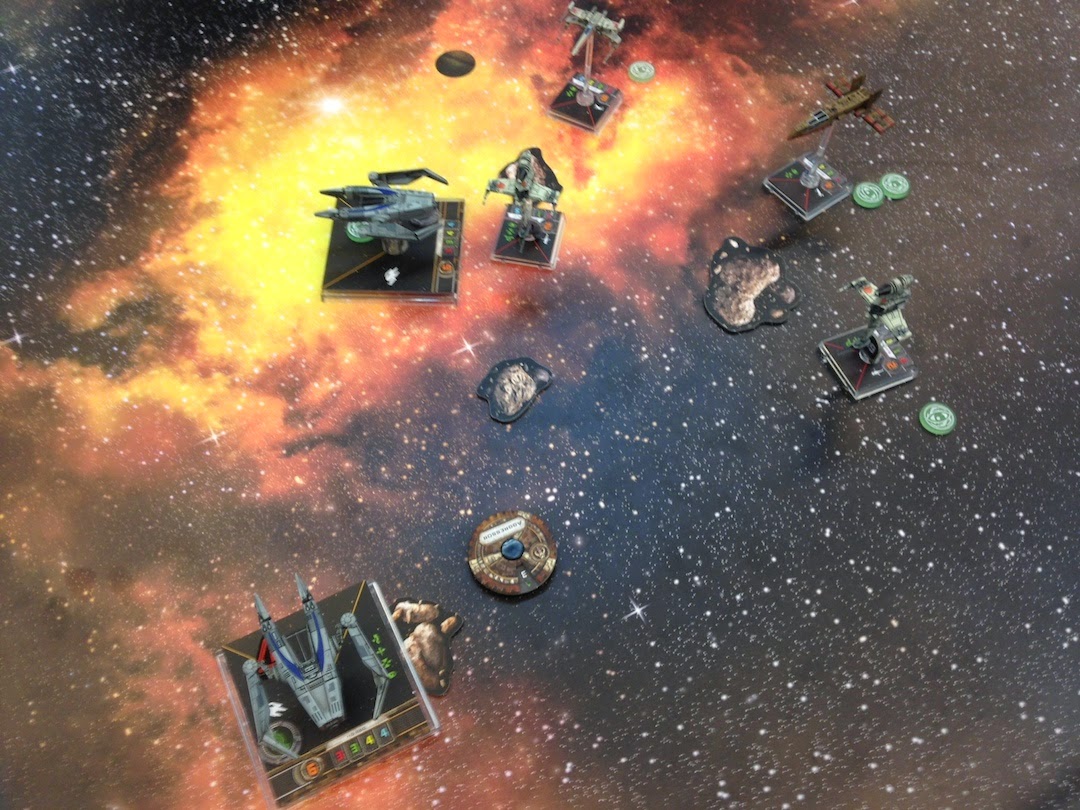 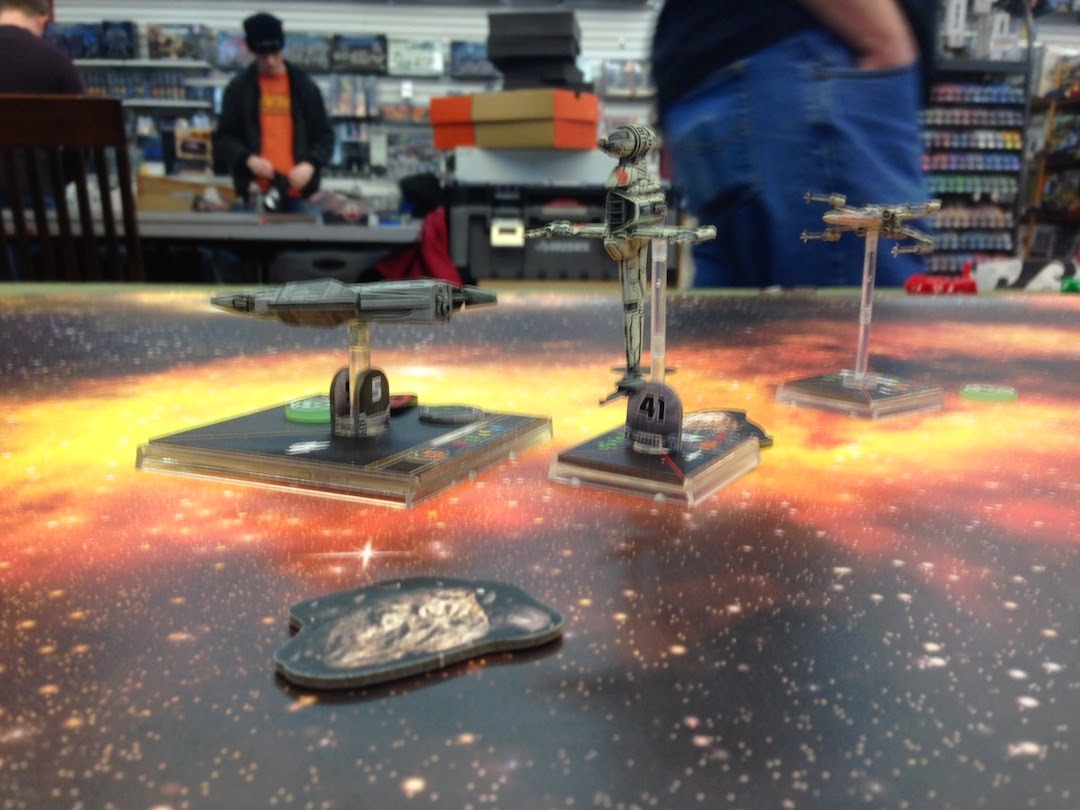 The newness of the expansion really saved me here. My opponent was having a pretty difficult time piloting the ship. He ended up stuck on asteroids half the time which allowed me take the victory. 1-0

I would have NEVER expected to see a 2 ship Tie Defender build. These guys are point hogs and only have 3 hull and 3 shields apiece. This list took me totally by surprise at how good it actually was. Still I managed to shut it down and take the win. 2-0 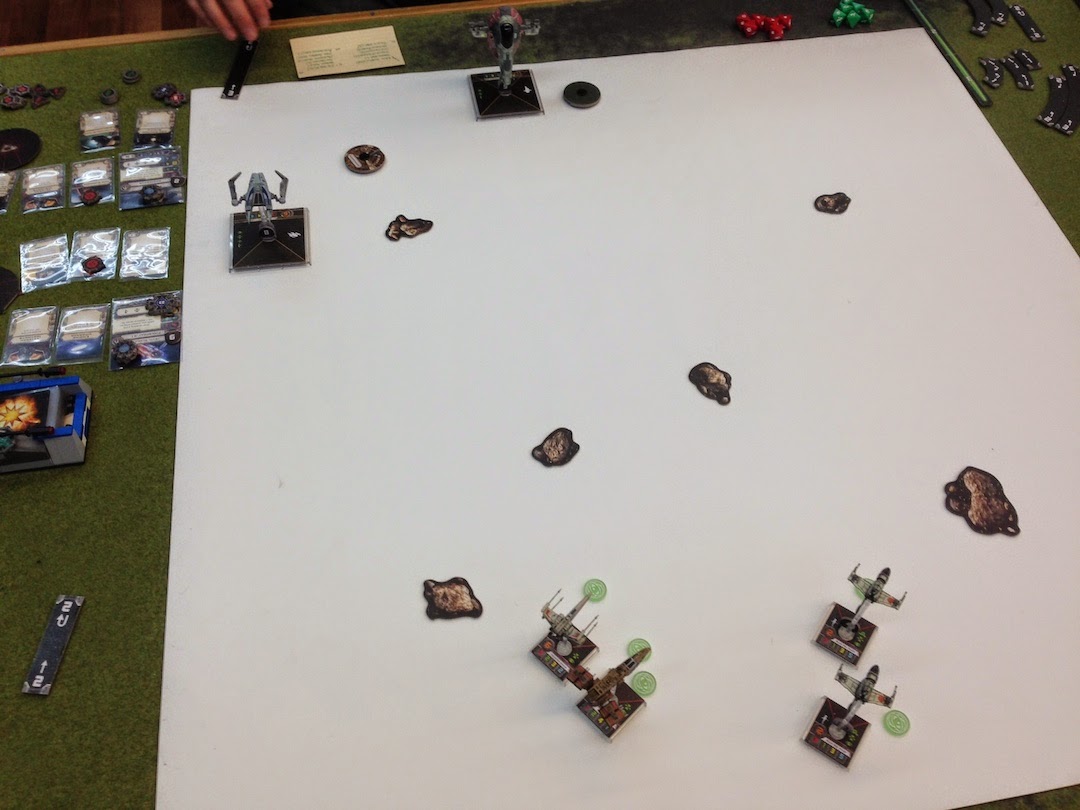 I managed to get him to split his ships off from each other and he was unable to focus my ships down. I took out Kath and that was pretty much the end for him. 3-0

I had a great turn 2 move getting 2 B-wings within range 1 of Torkil and took him out before he even fired a shot. However to my dismay, my opponent dropped Garven in the same round. From there we traded kills each round. In the end only Xizor was still left standing. It was a great game. 3-1 I would again place in the top 4 to head to the final tables. 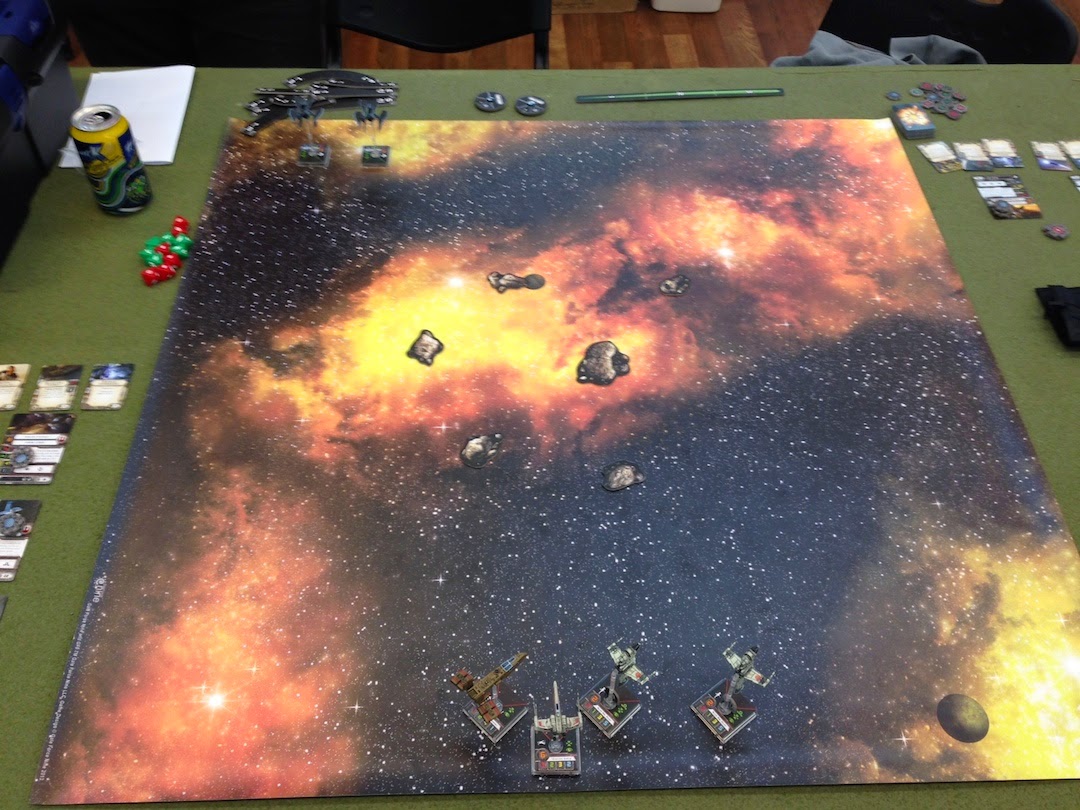 Double Defenders again. I thought I had this game in the bag. I had killed one Defender giving me 47 points. He had managed to kill Roark for 30. I had his remaining Defender down to 1 hull point. On the last turn just after time had been called I went in for the kill with Garven. I flew threw an astroid thinking he wouldn't expect it and managed to not hurt myself. I couldn't take an action though so I had no Focus. He made the move I was expecting and ended up at range 1. He would be firing before me because of his higher pilot skill, but I was still thinking this guy is toast and I've won. I get 4 shots to take out 1 hull. He took his 4 shots and landed a hit, hit, crit, crit unmodified. I rolled to save and got 0 evades! An X-wing has 2 shields so they went down. First crit was 2 damage and it didn't matter what the second was because he just took out my 3 hull. It was amazing. I still had my 2 B-wings to shoot at him which both failed to cause the 1 damage I needed. He did 5 damage with 4 dice at the last possible moment to win the game 47-56. I was absolutely stunned! It was amazing! Again, I won a limited edition dice bag and focus tokens. The Championship round was won by the Firespray/Aggressor list I had played earlier in the the day. 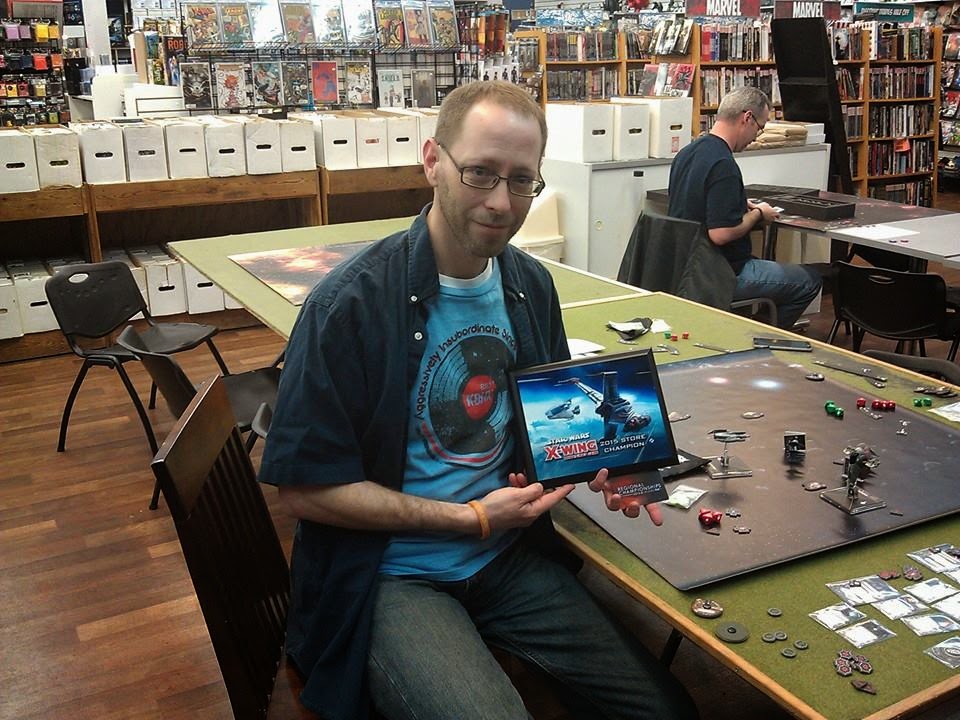 I freaking love this game! So happy to be back in the swing of things. Since I started playing again I've managed to amass a small Imperial fleet again. I had traded all of my Imperial ships to get what would end up being the start of my Cygnar Warmachine army. And as I mentioned earlier I now have most of the ships from the new Scum and Villainy faction. I'm really excited to get them on the table this week. Some of the new combos and cards are amazingly awesome. If you have time this Wednesday evening, I highly suggest coming up to Fantasy Books and Games for some X-wing action.
An awesome post by Capnmoe