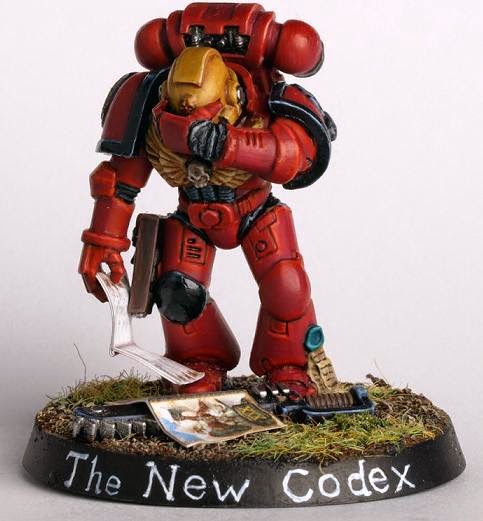 Makers here, been away from the game for awhile as real life has been getting in the way, and after the push for DieCon I got extremely burned out for awhile.

I have still been picking up the new codexes, supplements, data slates, pamphlets, booklets, biographies, etc...whatever the hell GW comes out with...

But the one that I'm really looking forward too is the Blood Angels codex towards the end of this year.

The problem for me, is that I am noticing a trend.

So many codexes lately have been nerfed into obscurity, specifically ones written by Matt Ward.
And some of them for good reason.

So far the rumors are as follows:

Mephiston is a Lord of War.
Blood Angels will gain access to the new Codex SM flyers, but not the tanks.

Mephiston being a Lord of War makes sense I guess but I can also see it being Dante.

I am anxious to see how they plan to "fix" Mephiston though. He either needs to be able to join a unit, or have a better way to move. Some people have said he will get a chariot, but I don't see it. My guess is that he gets "wings" as one of his assigned powers.

Getting access to the Storm Talon makes sense, and they will fit nicely into our Fast Attack slot with Baal Predators.

My other bet here is that Blood Angels get the transport treatment that Space Wolves got, and all dedicated transports will be moved to the Fast Attack slot since they are already fast vehicles.

The Sanguinary Terminators do not impress me. Unless they get some ridiculous rule that allows them to shunt move or something else crazy, they will be too slow, and over-costed point wise to be worth it.

New Priest models are cool, but I feel greatly unnecessary.
I'd rather have a new Mephiston AND a new Tycho model.

New Wheeled vehicle?
Well Blood Angels don't really use bikes, and I don't see them getting a Trukk or something, maybe the scouts will get access to buggies for transport, but for now I have no faith in this rumor.

So there's the rumors but what else can we look at?

HQ:
Dante - If he doesn't get Eternal Warrior I'm going to be very upset.

Seth - Capnmoe and I have discussed and both agree that Flesh Tearers will most likely be the BA supplement with Gabriel Seth leading it.

Astorath - I think he is pretty much perfect for what he does, what he costs, and the model looks perfect.

The Sanguinor - Has to come down in points if not made a Lord of War. A strong case can also be made for him being a Lord of War as well. Will Blood Angels be the first with 2? Possibly.

Reclusiarch - Chaplain will be removed from the elite section and this will be the default, over-costed, never used chaplain like the rest of the Marines codex-es.

Techmarine will also be removed from elites and moved back to the HQ section to fall in line with other books.

Now, with the removal of Techmarines and Chaplains, I expect to see the Furioso Dread and Librarian Dread split into 2 sections.

The Furioso Librarians also intrigue me with new rules.
Front armor AV13 is great, they have a ForceWeapon and give me 2 Warp Charges for 125 points.
The question here will be which chart do they roll on.

Obviously Biomancy is ruled out but Divination or Telepathy could be extremely appealing.

I believe everything stays the same but Death Company could be interesting.
Will they not have Objective Secured?
My bet is on a special rule that still prevents them from being able to score objectives.
I am also betting on the Death Company Dread being moved under Death Company as a secondary upgrade similar to the way Lemartes is.

Over all I think everything else stays mostly the same.

The only other rumors I am hearing is that "Descent of Angels" will ignore Interceptor.
I have no idea if its true or not, but I have heard and read it from multiple sources.

If not, I don't see deep striking Assault Marines as an option.
All it takes is one Riptide and your entire unit is gone.

I am really looking forward to see what the new codex has, but overall I am expecting the Grey Knight treatment. If recent trends are any indication, massive nerfs are coming, but I'm not sure how you nerf a codex that is already in ruins...