Introducing the LEGION OF DOOM!!! Chaos' Answer to Super Friends. 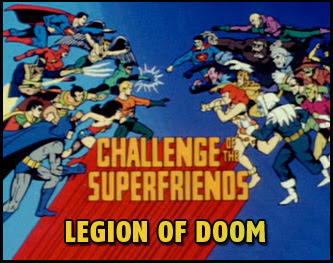 With Adepticon fast approaching, our current resident hope for winning the 40k Championships this year lies with Bill Keys and his Super Friends list. For those of you who are unfamiliar with this army list, it's essentially a combination of Dark Angels, Space Marine Librarius Conclave, and Space Wolf Thunderwolf Characters that combine to create an unkillable/unstoppable unit of frustration and douchebaggery. Seemingly, the only way to win against it is to not play at all. 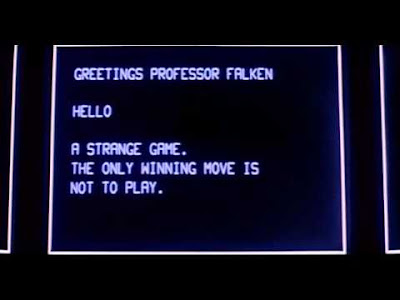 I was tasked with creating an army that could counter Super Friends in order to give Bill some competitive practice. It would need a shit load of psykers + high strength beat sticks + stupid gear that gives you ridiculous invulnerable saves. Thus was born The Legion of Doom. Using Super Friends as a model, I've combined the best equivalents from the Chaos Space Marine, Daemons, and Khorne Daemonkin into one singular ass-smashing machine. The list: 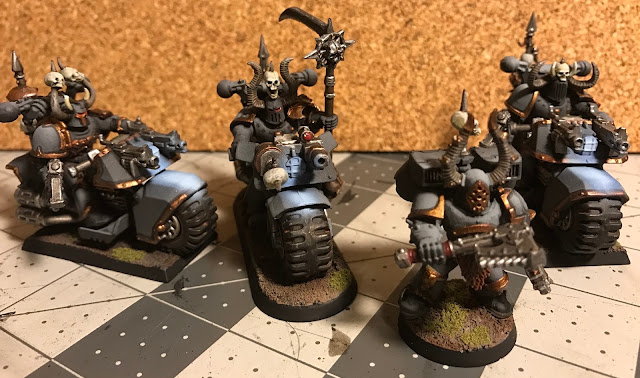 Cyclopia Cabal Formation (CSM Black Legion)
ENDLESS HATRED: Units that have the Veterans of the Long War special rule have the Hatred special rule, and can re-roll failed To Hit rolls in every round of close combat when attacking units that contain any models from the Armies of the Imperium.

Shroud of Deceit: At the start of each of your Psychic phases, select one model from the Cyclopia Cabal to lead it in a dark ritual. That model can attempt to manifest the Shroud of Deceit psychic power, below. For each other Sorcerer from this Formation that is within 12", add one dice to the Psychic Test – these dice do not cost any Warp Charge points.

Shroud of Deceit is a psychic power that targets a single non-vehicle enemy unit within 30". The target unit cannot be locked in combat. You can immediately make a shooting attack with that unit as though it were part of your army. 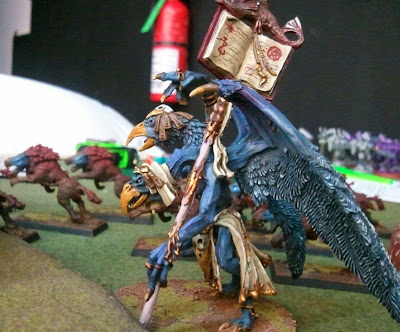 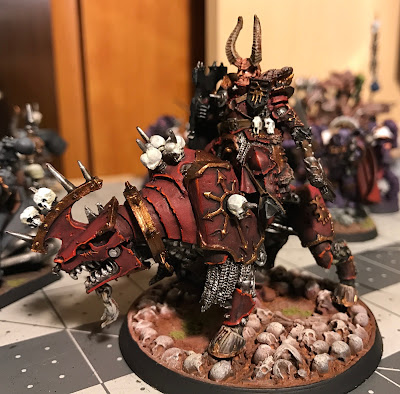 The idea is to combine the Cabal, Flesh Hounds, Herald Of Khorne, and Lord of Khorne into a single deathstar. The list generates 20 warp charge and 22 powers. By taking summoning on the Paradox Herald I can add to that by guaranteeing a successful summoning of Pink Horrors every turn. Alternatively, should I get the proper power, I can summon Screamers to zoom around and capture objectives. Priority on powers is generally:

The top 3 powers are a must. Anything else just adds to the utility of the main deathstar. Summoning will be taken every game by the Paradox Herald and Fateweaver's heads. Fateweaver is also guaranteed Prescience. At peak performance with ideal powers the deathstar will be rocking a 2++ re-rollable with a 4+ Feel No Pain and Eternal Warrior. The unit is Fearless, can scout, and has Hatred. I feel like the only thing it lacks that Super Friends has, is Hit and Run. Which admittedly, is a big deal, but I feel like it still stands up when you consider that every unit killed by the death star generates Blood Tithe for summoning D-Thirsters. There's also my re-rollable Warp Storm that can have some pretty interesting effects on the game.

We put the army through its paces recently to see how well it held up to 40k's current unbeatable army. Below is a quick summary of the game.

We played Mission 1: Marduck's Teeth from the Adepticon 2017 missions packet. 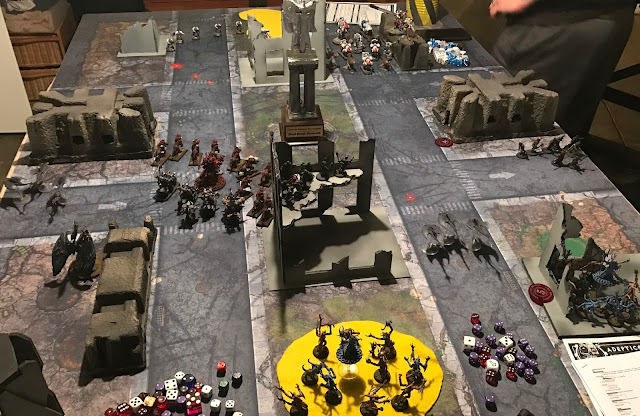 The Legion had round one. The Deathstar creeped forward staying out of charge range of the Super Friends. 3 Screamers were summoned and the Deathstar powered up. 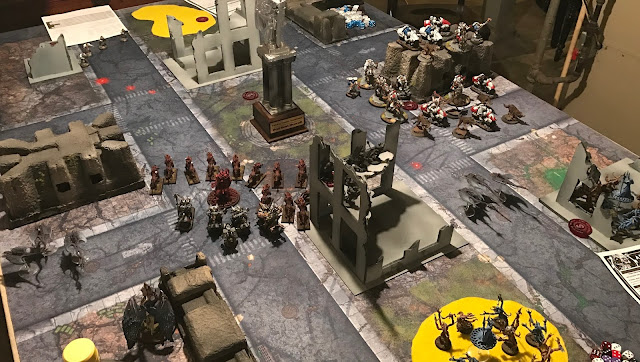 The Super Friends moved up and ate a unit of Cultists. 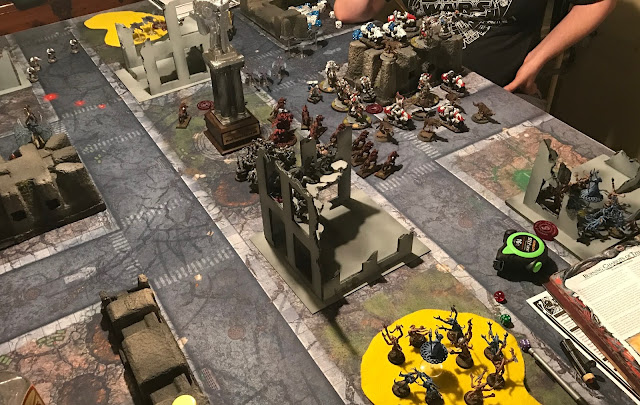 After powering up and and summoning more Screamers, the shit hit the fan in round 2 as the Deathstars finally met each other. 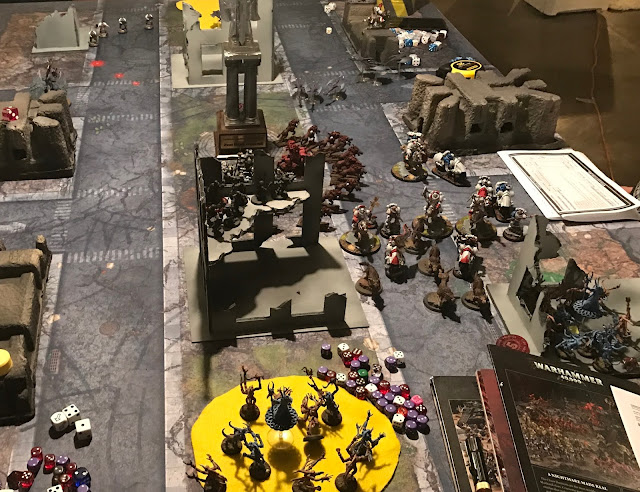 The Legion comes out on top killing one of the Wolf Guard Battle Leaders. The Super Friends then Hit and Ran out of the combat like a bunch of pansies. 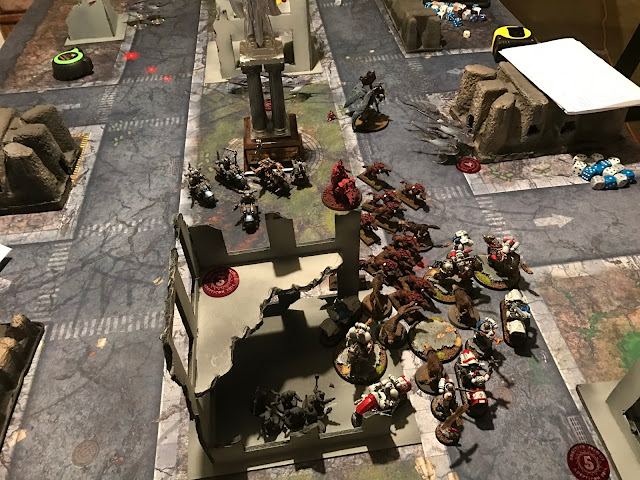 The next round saw them charge back in. As you can see the Legion hit them so damn hard that one of the models was knocked off of its base and clean into orbit. Reports are coming in that it can be seen floating outside one of the widows near the international space station. Rallied by their fallen comrade, they killed off a handful of Flesh Hounds in their turn and my ensuing turn. They then Hit and Ran again like a bunch of hookers. 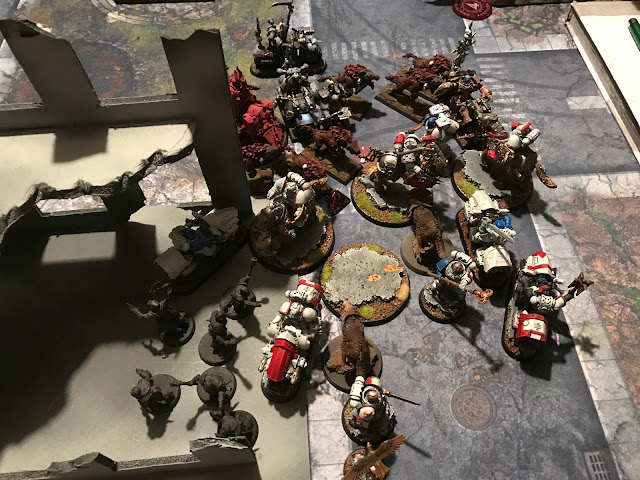 Super Friends then multi assaulted my 2 units of Brimstone Horrors and Heralds which they thoroughly trounced. 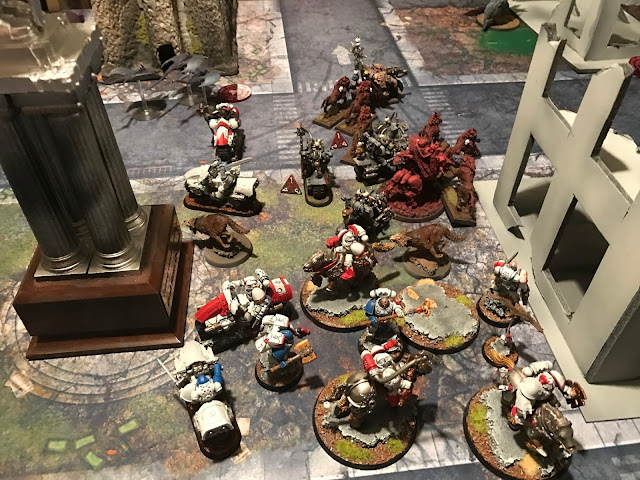 The Legion charged back in and the 2 units continued their tickle fight slowly chipping away at each other. My remaining unit of Cultists also entered fray. After pooping on the Cultists, Super Friends attempted to Hit and Run again but failed to roll enough distance to leave the combat. 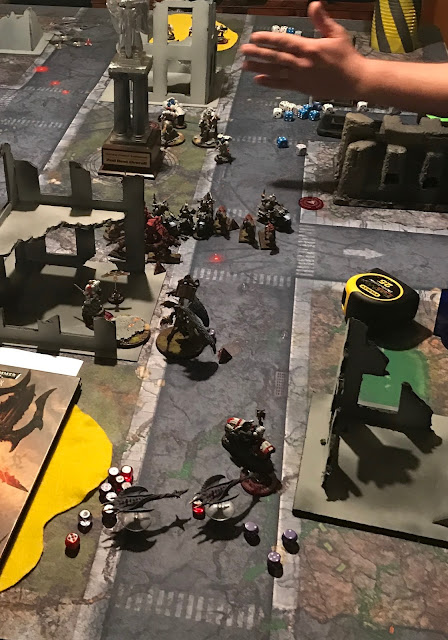 When the dust finally settled at the end of the game. Super Friends split up and took objectives winning them the game 28-12. My strategies weren't the best since I drank almost an entire 5th of Gin during this game, but the proof of concept for the Legion of Doom was at least a victory in my mind. The Legion killed a Libby, Wolfguard Battle Leader, Ravenwing Command Squad, and all of his Fenrisian Wolves. The Super Friends only managed to kill 6-7 Flesh Hounds from my Deathstar. I generated 8 Blood Tithe for a D-Thirster but unfortunately it was after my last turn. I had 3 units of jet bikes (Screamers) zooming around the board grabbing Maelstrom objectives. My failings were in protecting the Grimoire Herald and focusing on objectives. I can't wait for a rematch. Hopefully the practice will serve Bill well at Adepticon.
An awesome post by Capnmoe